Oregon State and Washington State meet at 2:05 PM west coast time today to conclude the three game series between the Beavers and Cougars. After today's game, the Beavers are off until Tuesday when they will face the Portland Pilots in Portland, Oregon.

Oregon State comes into today's game with a record of 29-7, 10-1 in the Pac-10. The Beavers have good wins against Gonzaga (2), Connecticut, Oregon, Long Beach State (2), Arizona (2), Arizona State (3), and Stanford (3). Their bad losses have came against Texas A&M Corpus Christi, Seattle University, and UC Santa Barbara.

The Beavers are currently on a eleven game winning streak with wins over Arizona (2), Portland, Arizona State (3), Stanford (3), and Washington State (2). The streak began after the Beavers suffered their 4th worst loss in the history of the program, an 18-0 defeat at the hands of Arizona.

The Cougars come into the game with a record of 14-19, 2-12 in the Pac-10. Their good wins have came against Cal State Bakersfield (2), Gonzaga (3), Stanford, and UCLA. Their bad losses have came against Minnesota, South Alabama, and Dallas Baptist.

Last night, the Beavers got two runs in the eighth to tie the Cougars, then got the game-winning run on a Danny Hayes RBI single in the bottom of the ninth inning to clinch the series for the Beavers. After today's game, the Cougars will return to the diamond on Monday to begin a two game series against BYU. 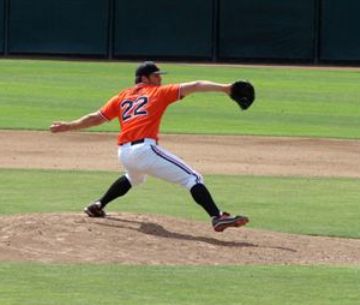 Josh Osich puts his undefeated record on the line today as the Beavers look to sweep Washington State. (Photo by So. Oregon Beaver Fan)

For Tuesday's game against Portland, it appears that either Scott Schultz (2-0, 3.21) or Ben Wetzler (5-1, 4.38) will get the start for the Beavers, since neither of them have pitched since last Sunday in Stanford.

This season, the Cougars have been plagued by inconsistencies, both at the plate and in the field. They began their season with high hopes and expectations, but they come into Easter weekend in the cellar of the Pac-10 conference. In order to gain an at-large bid into the NCAA Tournament, the Cougars will need somewhere around a 19-4 record to close out the season in order to make the Field of 64.

The weather is is expected to be great for the duration of the game. The Weather Channel calls for 66° and partly cloudy at 2:05 PM, with the temperature dropping to 62° near the end of the game. The forecast for Tuesday's game looks alright, with a projected high of 54° and showers in the forecast.