Oregon St. is looking like "one of those teams" this baseball season. One of "those teams" that finds a way to win. Coach Pat Casey will always tell you about doing all the little things to win ball games, but whether he likes it or not, luck is a factor too. However, you have to be good enough for getting lucky to matter, and you have to put yourself in position to benefit. The current Beaver team showed they understand that, as they extended their winning streak to 10 games with a 4-2 win over Washington St., Oregon St.'s ninth straight conference win.

Coupled with Arizona St.'s 17 inning 6-4 win over California in Berkeley, and Stanford's 7-4 upset of UCLA, the Beavers now have a 1 1/2 game lead in the Pac-10. Going into Thursday night's series opener against the Cougars, that didn't look likely.

Carter Bell was announced as out for the game, and maybe the weekend, bothered by his sore leg on a painfully cold night, shorting Oregon St. yet another starter, and another bat. Kavin Keyes, the Pac-10 Player of the Week last week would have to shift to third base, a position the should still be high school second baseman hadn't previously played in his still brief collegiate career. 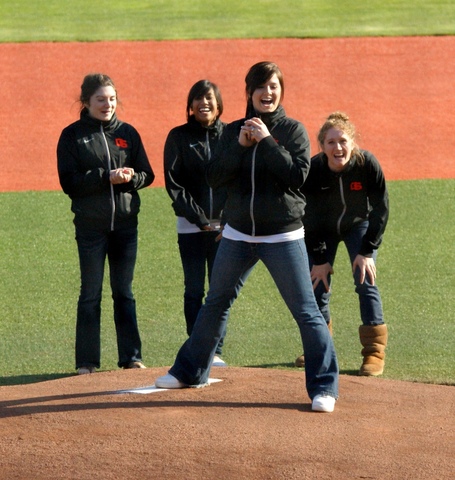 nation last weekend in the uneven bars at the NCAA National Championships, threw out

Further, the Beavers' ace Sam Gaviglio wanted another day's rest. Meaning Casey would have to send his #4 pitcher, James Nygren out against the Cougars' ace Adam Conley. 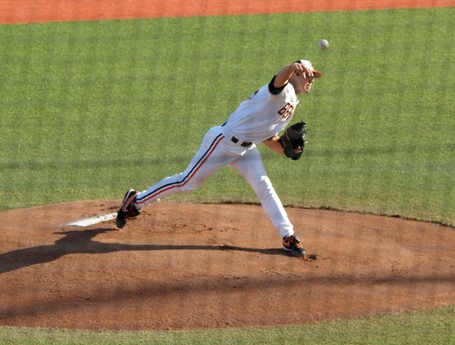 James Nygren wasn't the next Beaver Oregon St. fans expected to see on the mound,

but Nygren went 8+ innings, and picked up his 6th. win of the season.

And Michael MIller wasn't in the starting lineup either.

No problem, Keyes turned in a pair of web gems early in the game, and Brian Stamps turned the game around. All this while Nygren went 8 innings plus to pick up his sixth win.

Cougar fielding miscues in the first inning were responsible in part for the first Beaver run, but that's where putting yourself in position to benefit from lucky breaks comes in.

And it's not just speed on the base paths that makes Stamps special. His 8-6 double play with the bases loaded was a play no other center fielder in the Pac-10, and few anywhere, could have made. Stamps plays a shallower center field than almost anyone, looking more like a softball center fielder. This because he has the speed to still get to anything hit deep. But it also means he was close enough to get to a short pop fly that everyone, the Cougar base runners included, was sure to drop. Stamps diving catch and subsequent throw to second to double off a runner that had already reached third base saved a pair of runs.

"There isn't a ball hit (my way) I don't think I can get a glove on," Stamps said of his approach to outfield play.

And after a hobbling Parker Berberet had delivered a two RBI double, it was Stamps' speed that gave Oregon St. an extra insurance run. Any other player on either team would have been an easy out on Stamps' RBI single in the seventh inning, but Cougar shortstop Cody Bartlett realized Stamps' speed meant he had to try for a barehand snag and throw. A play he couldn't pull off cleanly.

Stamps' various spectacular plays allowed Nygren to battle through some difficult middle innings, and repeated calls even by Mike Parker, the voice of the Beavers, to be lifted, coming back to strike out the side in the seventh inning, and getting five of six outs on strikeouts before venturing back out for the ninth inning.

Jones and Taylor Ard finally chased Nygren, but Tony Bryant, below, cleaned up the situation with his 6th. save of the season. 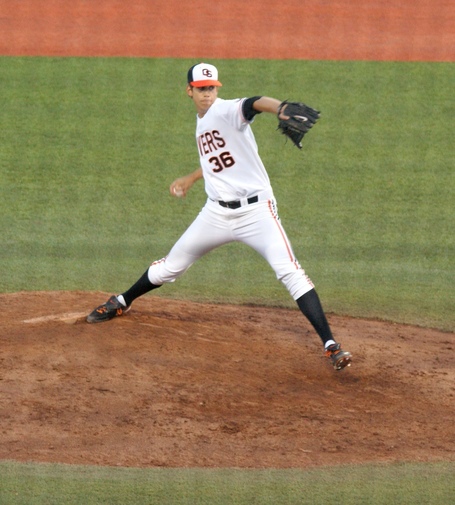 Gutty pitching and good defense, including multiple double plays, and Berberet's throw that allowed Ryan Dunn to wipe out a stealing Bartlett (below), saw Nygren and the Beavers through, despite a monster blast by the Cougars Derek Jones, easily the longest home run seen in an Oregon St. game this season 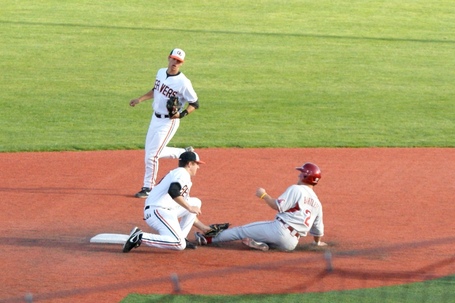 Jones' fourth inning homer, below, didn't just clear the warning track, it cleared the railroad tracks across the street outside the left field bleachers. 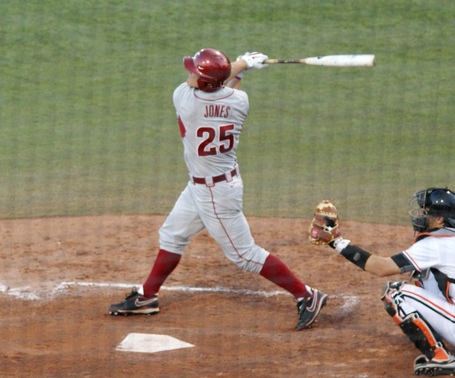 Washington St. out-hit Oregon St., and as noted, should have been the team on the upside of the 4-2 score. Watching the game, and without referring to the relative records of the teams that bookend the conference standings, one wouldn't guess there is so much difference in the teams. Except for that ability to find a way to win, vs. finding a way to lose.

The Beavers (28-7, 9-1) may need some more miracles Friday night, even with Gaviglio going, in order to get an eleventh win, which would clinch a series against the Cougars (14-18, 2-11) for the first time in 5 years.

Berberet came up limping after sliding into Bartlett while trying to break up a double play, and clearly was liming the rest of the game, a problem the temperatures that dropped into the mid-40s before the end of the game didn't help. 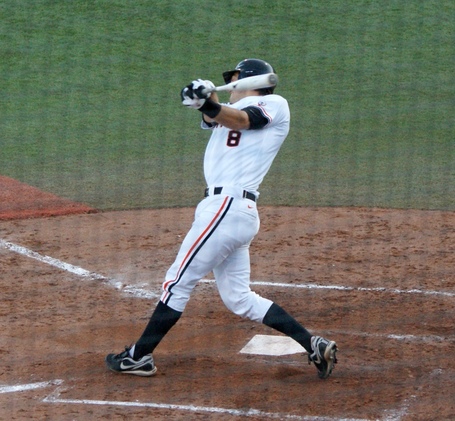 But Parker refused to come out of the game, even after delivering the game winning 2 RBI double that drove in Dunn and Luke Acosta in the seventh inning, yet another clutch performance by the bottom of the order. Whether he can come back tomorrow could be another matter.

But even if another Beaver has to step up, you get the feeling someone will.

As Stamps explained, "Everyone on the team is willing to pick up for anyone else, because you know that guy will do it for you."