Share All sharing options for: Kavin Keyes Pac-10 Player of Week As Beavers Climb Into Top 10

Oregon St. second baseman Kavin Keyes was named the Pac-10 Player of the Week for his contributions to the Beavers' sweep of Stanford, their first ever in Palo Alto.

The 18 year old Keyes from Sandy, UT, who could still be in high school, went 6-for-11 (.545) with a double and six RBI for the Beavers. Keyes also extended his hitting streak to 14 games, which ties Andrew Susac for the most by an Oregon State player this season.

Keyes drove in the go-ahead run in both Friday's 1-0 win and Saturday's 8-1 victory. On Saturday, Keyes delivered hits on the first pitch thrown to him his first three at bats, and reached on 4 pitch walks the next two times up, as Stanford decided not to throw to him. Keyes is now hitting .361 for the season.

The sweep, only the sixth on the road by the Beavers in 51 Pac-10 series since the reunification of the northern and southern divisions, propelled Oregon St. to first place in the Conference standings.

It was also the first time the Beavers have swept consecutive series against Pac-10 opponents since Oregon St. downed California and Stanford in 2006. 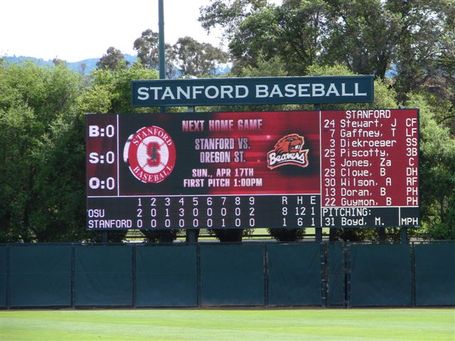 Saturday's win was the strongest of the weekend by the Beavers.

(Photo by "So. Oregon Beaver Fan")

The Beavers' current 9 game winning streak improved their season record to 27-7, tieing the 2005 & 2007 teams for the best ever start through 24 games.

Keyes became the second Beaver in as many weeks to be named Pac-10 Player of the Week, after Ryan Dunn earned the honor last week. Andrew Susac also received the honor earlier this season.Sam Gaviglio, who shut out Stanford for 8 innings Friday night, and was the Pac-10 Pitcher of the Week earlier this year, was nominated for the honor again this week. 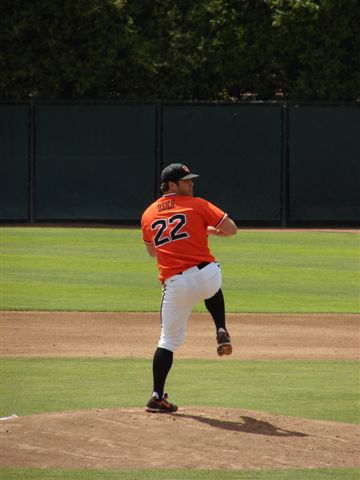 Oregon St.'s Josh Osich improved to 5-0 for the season after working 6 innings

(Photo by "So. Oregon Beaver Fan")