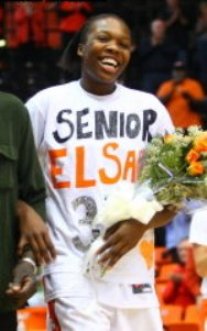 On a day when Oregon St., and 1,545 fans, honored El Sara Greer, the only senior on this year's squad, Greer did what Greer does. After smiling to the fans in the pre-game ceremony that honored her (left, in Ethan Erickson's OSU Photo), Greer proceeded to block three shots, giving her 88 for the season, a school record, and grab four rebounds, moving her into the top ten in Oregon St. history for boards in a season.

Greer also co-lead the Beavers in scoring, along with Alyssa Martin, with 13 points, but it again wasn't quite enough, as Arizona St. claimed the 59-54 win. It was the 13th. loss by a single digit margin of the season for the Beavers, who wound up the regular season 9-20, and 2-12 in the Pac-10, in tenth place going to the Pac-10 Tournament, where they will have a rematch with third place Arizona St. (19-9, 11-7) Wednesday at noon in the Galen Center on the USC campus in Los Angeles.

The Beavers led by as many as 7 points early, when Sage Indendi, who finished with 12 points, capped a 12-3 Oregon St. run with a basket with eight and a half minutes left in the first half.

Arizona St. answered with a 15-3 run of their own, taking the lead for good a minute and a half later, on a two plus one three point play by Adrianne Thomas.

But the Sun Devils never got further than 7 points ahead the rest of the game.

Earlysia Marchbanks twice pulled the Beavers within 2 points in the second half, then Martin and Alexis Bostick both cut the deficit to one point. But Bostick missed the free throw that would have tied the game at 55 all with 53 seconds left, and Oregon St. didn't score again.

Watson finished with 14 points for Arizona St., one behind the game high 15 Kimberly Brandon recorded.