The Oregon St. women's basketball team won a Pac-10 game for the first time this season, and in the Scott Rueck era, Saturday in Seattle. Leading for all but one early possession, the Beavers defeated Washington 51-46, behind 17 points by Sage Indendi, and a 10 point, 10 rebound double double by El Sara Greer.

After 10 conference losses, it was good to finally see a success. Whether it's a turning point, or merely an isolated incident, won't be known until some more games are played. After all, this was a win against one of only two other conference teams with an overall losing record, not a team from the top half of the conference. The entire northwest pod of the Pac-10 is currently well behind the rest of the conference, holding down the bottom three spots in the standings, and the only three overall losing records. The relative talent shortage region wide is a big part of that.

But it was a win, in a game decided going down the stretch.

With only two returning players, and a roster that includes players on campus primarily for their volleyball and soccer skills, and another that made the team after an open tryout, the biggest question going into the season was whether the team could even be competitive.

That turned out to not be a problem. A 7-4 preseason record, even given that the competition wasn't of that high a level, was a good start. Those 10 conference losses include 4 losses by 3 points of less, as were 2 of their preseason losses. Two more conference losses, and one in the preseason were single digit losses. Clearly, all of those games were reasonable win opportunities as well, especially since the Beavers had late leads in a number of them.

Rueck returned to Corvallis known for coaching teams that could not only compete, but win, having turned in an undefeated season, and winning an NCAA Division III national championship at George Fox. That wasn't an isolated incident either, as Rueck won 7 conference championships, had 7 teams finish ranked in the top 25, and took 5 teams at least to the elite 8 out of his 14 consecutive winning seasons.

So it was and is a bit of a surprise that the Beavers were losing the games they were in position to win. A lack of talent prevents teams from being in position to win, and is a coaching problem only if coaching is responsible for not identifying, attracting, and developing talent. Not the case here.

Conditioning, mental preparation, substitution patterns, game management, play calling, those are the things that coaching is responsible for, and where the Beavers have been coming up short. In Seattle, Oregon St. finally finished instead of falling apart.

Baskets by Alyssa Martin built a 13 point first half lead, and after the Huskies fought back within 5 points, another 12 point lead with 11 minutes left. Washington again rallied, and got within 4 points, trailing 45-41 with 1:43 left. But the Huskies never got within a single possession, as Martin sank 4 free throws, and Greer another 2, to maintain control of the game.

Beaver fans of any sport know all too well what it means to lose big, and also to lose heartbreakers, so none of this is a new experience. But there has also been enough successes, and in a variety of the programs, to know that it isn't impossible just because they are from a campus in Corvallis. That "losing culture" isn't really an excuse for losing winnable games.

But confidence is another matter, the one Rueck most has to address with a group that admittedly isn't as "good" as the program eventually needs to be, but also isn't that far off. More nights than not, Rueck's girls are good enough to win. Lets see, and hope, the win at Hec Ed will indeed be not just a good day to be a Beaver, but if not a turning point, at least a bend in the road, in the right direction. 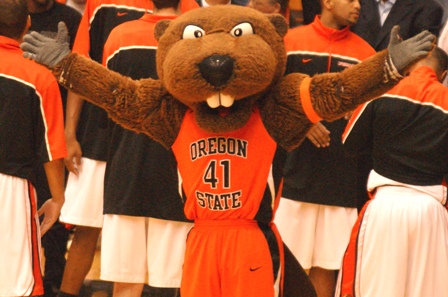