The Beavers spent all evening chasing the Cougars' tail, and a lack of offensive punch prevented them from ever quite catching it.

The start of the game was an indicator of things to come, as Oregon St. went 4 minutes before scoring, falling behind 6-0 and 9-4. Though the Beavers quickly caught up, and even took a momentary 11-10 lead, the only time they had the upper hand all night, it didn't last.

Washington St. went on a 15-0 run that was as much about the absence of any Oregon St. offense as anything, as the Beavers went over 7 minutes without scoring.

Oregon St. battled back again, cutting the deficit to five points by halftime. But the Beaver offense disappeared again after the break. It took a minute and a half, but Devon Collier's basket made it 32-29. It would be 4 minutes before Oregon St. scored again, and Omari Johnson's layup were the only ones up to the 10:50 point, by which time Washington St. had crawled out to a 10 point lead again.

The Beavers scratched their way back into the game again, and when Collier connected on a jumper with just under 7 minutes left, the Cougars' lead was down to 4 points.

The turning point came around the five minute mark, and Oregon St. trailed by 5 points. Back to back possessions resulted in Oregon St. turnovers, and two + one three point plays on the other end. Instead of possibly cutting the deficit to one point, or possibly catching the Cougars, the Beavers found themselves down 11 points again.

Oregon St. fought back again, and Calvin Haynes' free throws pulled the Beavers within 4 points with 48 seconds left. Roberto Nelson's layin made it 57-55 Cougars with 23 seconds left. But that was the end of the scoring for Oregon St., while Washington St. got 4 free throws from Faisal Aden to close out the win.

The Oregon St. defense. The Beavers shut down Klay Thompson, limiting the probably future first round NBA draft pick to just 6 points. Thompson, the Cougars' leading scorer, fouled out with nearly 2 minutes left in the game, and notably, had as many turnovers as he had assists, 5 of each. 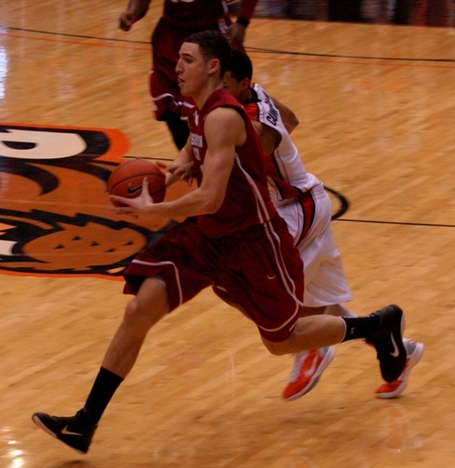 The Beavers, who used both their 2-3 and 1-3-1 zone defenses effectively, and even mixed in some man-to-man, constantly frustrated Thompson, who struggled all night on the offensive end of the floor.

As a result, and despite the 14 points Reggie Moore scored to lead the Cougars, the Beaver defense had them in position to potentially win at the end had a reasonable amount of offense occurred.

Something else that went right was Collier, who followed up a solid 35 minute night in the win over Washington with 33 more minutes of solid ball on both ends of the floor tonight. Collier recorded a double double, and both his 16 points and 10 rebounds were career highs. So were the 4 blocked shots he had. 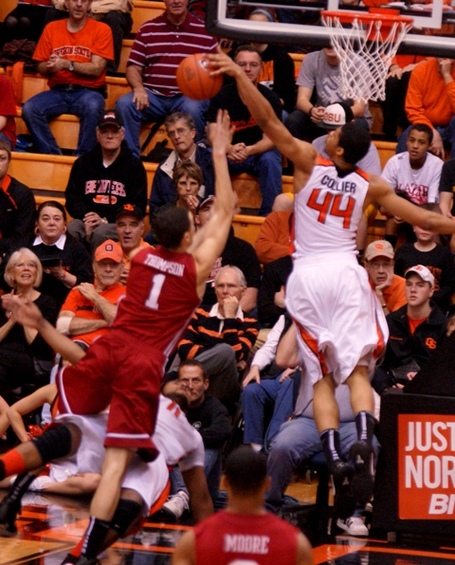 Collier continues to eat up minutes, playing well doing in the process. And he's cleaning up other's mistakes, such as the layup off Joe Burton's missed free throw, and the free throws earned drawing a foul while fighting for the offensive rebound after a missed three pointer.

Oregon St.'s hustle also worked. The several comebacks showed again that the team has heart, and isn't quitting. The stats bear out that observation. The Beavers had 22 points off turnovers, against 10 by the Cougars. Oregon St. also had an 11-8 edge in second chance points, a 14-6 edge in fast break points, and two more points in the paint than Washington St.

Interior defense against opposing big men was good as well. Washington St.'s DeAngelo Casto had a double double, but just as Oregon St. did against Washington's Matthew Bryan-Amaning, the Beavers kept the double double a small one. Casto had 11 points and 10 rebounds, certainly acceptably small figures from Oregon St.'s point of view.

"If we make our free throws, we win the game," Oregon St. coach Craig Robinson said. "It's as simple as that."

On a related note, the Beavers got very little production across most of their team. Besides Collier, only Jared Cunningham was in double figures, with 12 points. And there was less than five minutes left in the game by the time Cunningham reached double figures. 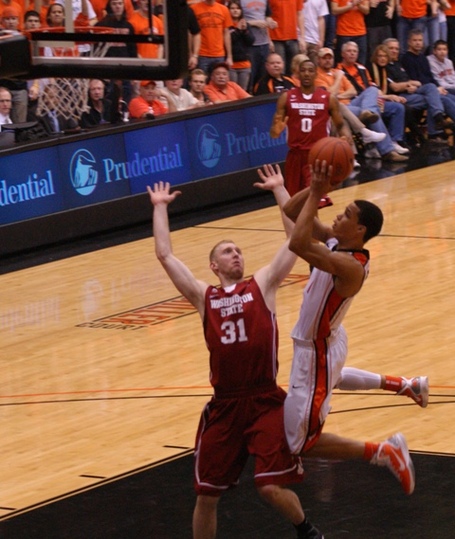 Mt. View High in Bend, OR. Cunningham came up with only 12 points agains the Cougars.

Ahmad Starks made his second start, but is clearly uncomfortable shooting the ball. Starks took only 4 shots, and finished with just 3 points. Starks gets a big share of the credit for the defense on Thompson, just as he was instrumental in shutting down Washington's Isaiah Thomas. But his point production, coupled with 0 assists, won't get it done at this level.

In all seven players fired up three pointers, more than Robinson wanted to see.

"We took too many 3's, because we were having success getting the ball to the basket and throwing it down low," Robinson said. "It really is hard to resist shooting those 3's when you're wide open. You never think you're going to go 11 percent, because we're a 30 percent three-point shooting team. If you just shoot your average, you win the game."

"We just missed too many free throws," Cunningham commented. "The main thing that happened was free throws. The ball was just not going in for us when we were pushing it and stuff. I don't know why. It's just a mental thing. We just need to get up to the line, relax, and shoot. We shoot them every day in practice. I don't see why we are missing them in the games. We just need to focus in a little more and concentrate on the free throw."

Burton's offense didn't work either. Burton was on the floor for 31 minutes, but had only one basket. Opponents are now aware of Burton's baseline moves, and have adjusted their defenses to crowd him onto, or over, the baseline. Burton needs to develop some sort of reverse move to take advantage of the openings that opponents overplaying him create, but are going unutilized.

Pac-10 officiating didn't work either, but both teams could (and did) make an argument for "most abused" status, and that's been the case time and again. The moral of the story here is that to be successful, it's necessary to not get into more close situations than necessary.

Washington St. (16-7, 6-5) used their bounce back win, after a 26 point loss at Oregon Thursday night, to climb into a tie with California for fourth place in the Pac-10 conference, after the Golden Bears lost a heart-breaking 107-105 contest in triple overtime to Arizona, who now leads the Pac with a 9-2 mark.

Oregon St. (9-13, 4-7) fell to ninth in the Pac-10, and are heading to LA this week. The loss was especially damaging, given that the Beavers have their next three games, and five of their last seven, on the road.