Oregon St. knocked off Washington Thursday night in Gill Coliseum, and the Beavers did it by literally knocking the 20th. ranked Huskies off balance all night. Starting with a shakeup of the starting lineup, Coach Craig Robinson threw numerous surprises at Washington, who came in leading the Pac-10, but weren't by the end of the night.

Joe Burton, Angus Brandt, and Ahmad Starks all started, though Robinson would also play Omari Johnson off the bench for more minutes than anyone except Devon Collier. Johnson responded by turning in a game high 11 rebounds.

Starting both Brandt and Burton upset Washington's Matther Bryan-Amaning, and though the Huskies jumped out to an early 11-4 lead, Bryan-Amaning picked up two fouls in less than five minutes, and missed more key minutes early than usual.

Robinson also countered Washington's Isiah Thomas by assigning the even smaller, but speedy, Starks to him much of the night. As a result, Thomas could never get comfortable, and had only 9 points. The telling stat was Thomas suffering more turnovers, 7, than he served up assists, 6. Starks, making his first start, wound up with 8 points, as well as an assist and a steal.

Oregon St. rallied after Washington's early quick start, and tied the score at 13 all less than 7 minutes into the game. It was still tied, at 32-32, at the half, and the Beavers would have been well ahead had it not been for Scott Suggs. 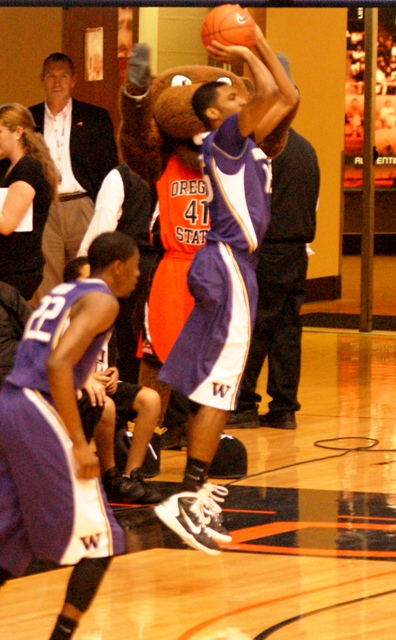 Suggs (above) sank four of the five three pointers he hit on the night in the first half, and had 14 of his career high 18 points, which led Washington in the scoring column, before the break, which kept the otherwise cold shooting Huskies in the game.

It was far from a perfect first half by the Beavers, but there were plenty of good plays as well, and most importantly, Oregon St. set the tone early that they would respond to any miscue with an effort play.

Oregon St. kept the pressure on Washington in the second half, and Jared Cunningham got Bryan-Amaning with a hard drive that drew MBA's third foul. Cunningham shook off the hard contact, and drained a pair of free throws, and shortly thereafter, Washington coach Lorenzo Romar had to take Bryan-Amaning out for a while again, just when the Huskies could have used a rally.

The free throws were just two of the 17 shots from the line Cunningham took. By connecting on 13 of them, Cunningham finished with a game high 19 points.

"I'll have to get some ice," Cunningham admitted after the game.

Bryan-Amaning eventually put up a double double, but only a modest one, 12 points and 10 rebounds. No one besides Suggs and Bryan-Amaning made it into double digits for Washington.

Oregon St. even broke out the "point-center" offense at times, with Brandt and Burton both drawing Bryan-Amaning out 15 feet away from the rim at times. The several tactics that were employed to blunt Bryan-Amaning, who has been a Beaver killer the last couple of seasons, including Washington's 103-72 in the teams first meeting in Seattle.

Rebounding was another big key to the game, as Oregon St. battled to a huge 47-32 advantage, which produced three put-back baskets for the Beavers in the second half. 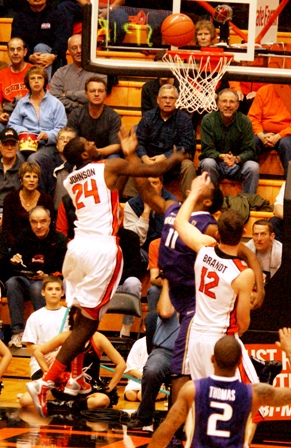 Johnson, above, had a put-back basket off Stark's missed three pointer to give Oregon St. a 58-52 lead with three minutes left.

The Beavers' aggressive play also got them to the line 38 times, and led by Cunningham, connected on 24 of them. In contrast, the Huskies got only 19 free throws, and hit only 9 of them. 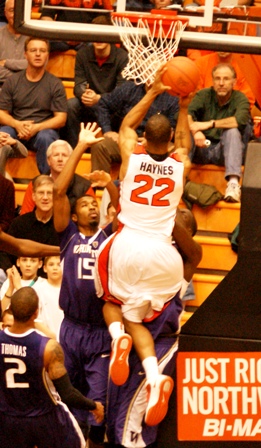 Calvin Haynes (above) came up big for the Beavers off the bench, with 11 points, 7 rebounds, 3 assists, and 2 steals in just 21 minutes. Haynes had 5 consecutive points with less than 3 minutes left, which opened a tight 58-54 game up to a 63-54 Oregon St. advantage with a minute and a half left.

"The game plan was to rebound, rebound and rebound," Haynes said.

Venoy Overton got a layin to answer, but it would be the last points Washington would score. Notably it was also the only field goal the Huskies had in the last 8 minutes of the game, after Suggs' last three pointer. 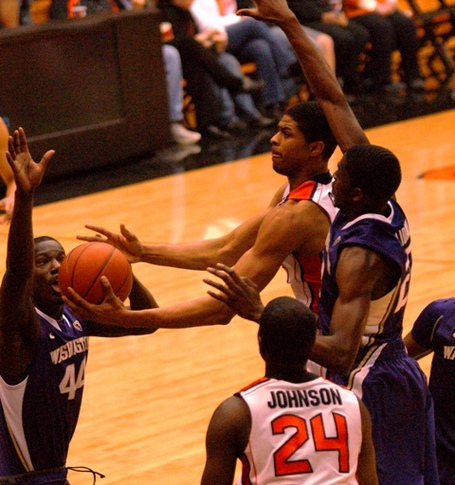 Collier, above, had a solid game, and just missed a double double, with 9 points and 9 rebounds, along with a blocked shot.

There was even a Chris Brown sighting, as the lightly used big man made an appearance for a minute, and with the game still in question. It was just another on the long list of surprises Robinson sprung, which kept Romar guessing, and more importantly, reacting, rather than dictating the style of play as Washington so often does when they are playing well.

Washington actually waved the white flag with a minute left, and Oregon St. stood and watched the clock run out.

The win, Oregon St.'s first over a ranked team in 5 years, broke a 3 game losing streak, as well as an 8 game losing streak against Washington, and improved the Beavers to 9-12 for the season, and 4-6 in the Pac-10. Oregon St. is now in a 4 way tie for sixth in the conference, and only three games separate the 8 teams in the middle of the Pac-10 standings.

The loss was Washington's second in a row, after having lost to Washington St. 87-80 last Sunday night.

The Cougars (15-7, 5-5), who will be in Corvallis for a game with the Beavers at 5 PM Saturday, couldn't keep the momentum from that upset going though, and "Couged" it tonight in Eugene, losing 69-43 to Oregon.