"I'm not that frustrated; I'm really not."

Share All sharing options for: "I'm not that frustrated; I'm really not."

Without being excessively apologetic, there is reason to agree with Robinson, despite the fact that Oregon St. is sitting 7 games below .500, and 6 below .500 in the Pac-10, in ninth place. That stat alone, considering that the Beavers have played much tougher competition since the conference race started, and have done better, indicates progress.

It also reflects the amount of inexperience Oregon St. started the season with, but raises concerns about the Beavers' ability to take care of business. Win those 6 games they lost late last calendar year, and Beaver Nation is in the middle of the race for at least an NIT bid. And the season is being talked about as another step forward.

Oregon St. didn't get it done nearly well enough early on though, and when that happened, it became necessary to do quite a bit better in the Pac-10 in order to be "better".

"For the most part, for the second half of the Pac-10 season, we're starting three sophomores and two freshmen, and the bulk of our minutes are going to the younger guys, so I'm not as frustrated."

Sophomore Jared Cunningham, while frustrated offensively at times, certainly has improved since even late last season, and is one of the best ball thieves in the nation.

Freshman Devon Collier is possibly the pleasant surprise of the season, and could well be on track to track Cunningham in terms of improvement and importance by the time next year's Pac-12 season rolls around.

Freshman Ahmad Starks has also begun to find his scoring game of late, with a career high 18 points against California, who for the second time this year has seen Starks have the best game so far in his career. Starks' defense is already pretty consistently good, which is what earned him a starting job. And a couple of nifty moves against the Golden Bear's Jorge Gutierrez, where Starks made the fact that he is the smallest person on the floor an advantage, promises to produce roars from the Beaver Dam, and groans from opponents' coaching staffs, for years to come.

Even Angus Brandt is continuing to improve.

But what about Joe Burton, who might be as frustrating as anyone in Oregon St. history, mostly because he has shown in bursts and spurts that he can do a lot, but also hasn't done so for long stretches? How long should it take Robinson to add consistency to talent?

And in the era of "plug-and-play" that extends to basketball players, what about Roberto Nelson, who not only waited a year to become eligible, he also had to wait until after fall term finished? All that practice time hasn't translated into performance; rather, Nelson has faded further into the background as the weeks have gone by.

"I'm frustrated that I didn't manage my expectations for the youth and I would have loved to have played a lot better this year."

At least Robinson is frustrated about something. Is his admitted inability to manage expectations actually a bigger issue than managing accomplishments? Or has Robinson been right there with Beaver fans, the victim of excitement, to the point of giddyness at times, about the possibilities the future holds?

"But when you see what the future holds, it takes some of the pain away. So I'm not as frustrated. I like the fact that we're getting better."

Based on experiences with the first two of Robinson's recruiting classes, it's unlikely there will be a major impact by a newcomer, at least right away. So next season, at least initially, looks like a great backcourt, with Starks joining Cunningham (right) as at least one of the best defensive guard combinations around. But will Nelson improve enough to be an adequate running mate for Collier? The Brandt/Burton rotation at the post could actually be adequate, and as long as one or the other has a good game, or a good matchup, as important as actual talent in the Pac sometimes.

The scramble will be to figure out a second unit.

As a fan, and more importantly, as a dollar paying supporter of the product (whether you buy one pair of tickets, and one t-shirt a season, or actually return those BASF letters with a check enclosed), Beaver Nation is at that point where they have to decide if they are frustrated enough to make a course change, or if they too are not "that" frustrated.

Seeing former coach Jay John, who recruited the graduating quartet of Calvin Haynes, Lathan Wallace, Omari Johnson, and Daniel Deane, all one time starters who, except for Johnson, have lost many of their minutes, now an assistant at California, yesterday, I was reminded of that time within the stay of these players, when there was no risk of giddyness over possibilities.

It's also worth noting that Oregon St. is not on NCAA probation, something several members of the Pac cannot say. Some might question exactly what that is a sign of.

6,741 fans, A.C. Greene included, showed up yesterday in anticipation of at least an interesting game, with both Cal and Oregon St. coming off wins the nature of which made both fan bases fairly happy Friday morning.

Considering it was a game between two young teams dwelling in the lower half of the conference standings, and one they could have watched from the comfort of the couch at home, not too bad. Especially given that Cal does NOT elicit the level of excitement that in-state rival Oregon, northwest rival Washington, or the LA schools, do in the portion of Beaver Nation that do not realize this isn't the Pac-5, and those are not the only other teams that actually matter.

They even got close to 10 extra minutes of listening to the "Spirit and Sound" of Oregon St., and the sounds from some spirited Oregon St. fans, while the aftermath of 5 technical fouls was sorted out.

But is it enough? 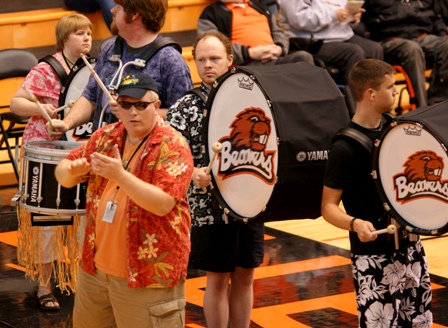 (The band really isn't that frustrated, and didn't actually leave for spring break as soon as the game was over.)

PLAY THE MARCH TO THE CHAMPIONSHIP GAME AND YOU COULD WIN A TRIP FOR TWO TO LAS VEGAS!

LOOK FOR THE CODE INSIDE SPECIALLY-MARKED PACKAGES 12-PACKS OF BUD LIGHT ENTER CODE AT FACEBOOOK.COM/BUDLIGHT

No Purchase is Necessary. Open to U.S. residents (except CA & TX) 21+. For a chance to win a Grand or First Prize, Game Period 1 begins 3PM CST on 2/14 & ends 3PM CDT on 3/18. For a chance to win a First Prize only, Game Period 2 begins 3:00:01PM CDT on 3/18 & ends 3PM CDT on 4/30. To participate, obtain a Code from inside specially-marked packages of Bud Light beer or to request a Code without purchase, visit budlight.com/freecode during a Game Period. Limit one (1) free Code request/day/person or email address. To play, text HOOPS to BEERS (23377) & follow prompts or visit budlight.com/freecode & follow instructions. See Official Rules inside package or at budlight.com/freecode for complete details. Void in CA, TX & where prohibited. Enjoy Responsibly – ©2011 Anheuser-Busch, Inc., Bud Light® Beer, St. Louis, MO