Bears Claw Their Way Back To Beat Beavers On Senior Day

Share All sharing options for: Bears Claw Their Way Back To Beat Beavers On Senior Day

California clawed their way back from 8 different first half Oregon St. double digit leads, the largest by 14 points, 30-16 at the 10:30 mark, on a Calvin Haynes basket, to take eventually take momentum in the second half, and pull away to 10, and finally 11 point leads in the last minute.

Oregon St. got off to a great start, jumping out to a 10-1 advantage in the first two and a half minutes. Ahmad Starks had two of his four three pointers, and 12 of his career high 18 points, in the first half, as Oregon St. seemingly was able to quickly respond to any Cal challenge, leading by at least 6 points the rest of the way to halftime. Starks also had 6 steals.

The Beavers had 17 points off 10 takeaways in the first half, as the Golden Bears struggled early against the Oregon St. zone defense, including a couple more highlight reel dunks by Jared Cunningham. 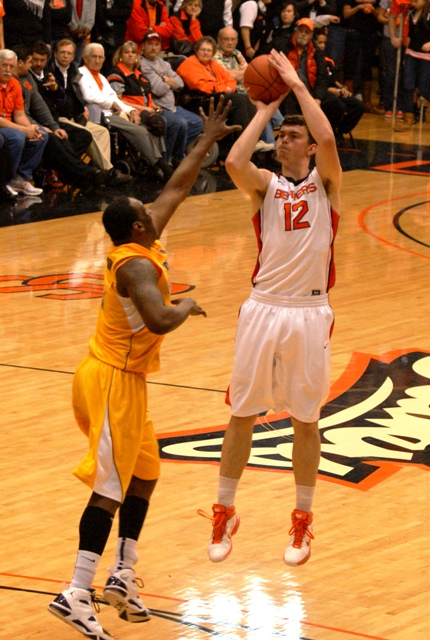 The first of a number of game changing developments came after Angus Brandt (12, right) buried a three pointer for a 37-28 Oregon St. lead with five and a half minutes left in the first half. Brandt turned his right ankle when he came down on Cal's Mark Sanders-Frison's foot. Brandt would return after having his ankle retaped, but was less effective the rest of the game.

With 4:52 left until halftime, Joe Burton received a personal foul, and Cal's Harper Kemp shoved Cunningham out from under the basket, with no call. Cunningham pushed back and received a technical foul. After five minutes of the officials watching the monitor, the technical foul stood, and Cunningham was neutralized for the rest of the half.

Cal cut a 10 point deficit down to 6 at halftime, after Oregon St. missed consecutive three pointers, by Lathan Wallace and Starks.

The second half was much tighter. Allen Crabbe's three pointer cut the Oregon St. lead to three points, and neither team would lead by more than 5 points until Crabbe hit consecutive shots, the second a three pointer, to take a 78-71 lead with five and a half minutes left. The Golden Bears had at least a two possession lead the rest of the way. 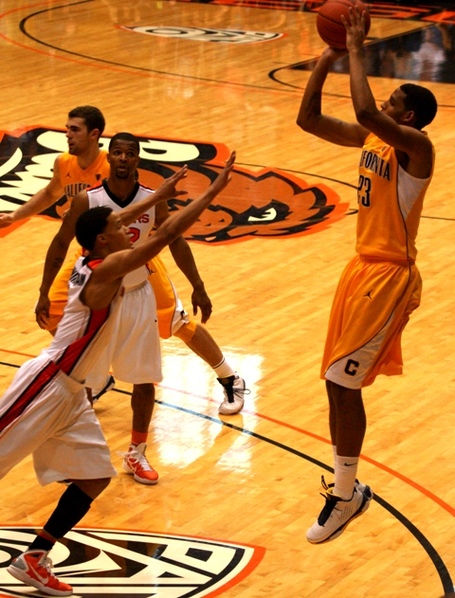 A touch foul called on Cunningham, seconds and feet after a no-call on hard contact by Cal's Brandon Smith with 11:54 left led to a melee, and after several more minutes of review of video, technical fouls on Cal's Smith, for the uncalled hard contact that led to the subsequent squabble, and also Mark Sanders-Frison, as well as Oregon St.'s Burton and Haynes.

It may be the first time a technical has ever been assesses retroactively after continuing action has led to four additional foul calls.

The technical on Burton, along with a dubious call with just less than three minutes left in the game, again involving Smith, led to Burton fouling out with two and a half minutes left.

Another 8-1 run down the stretch, sparked by a layup and a pair of foul shots by Jorge Gutierrez after Burton fouled out, salted the win away for the Golden Bears, who out-scored the Beavers by 17 points after the break.

Crabbe had a game high 26 points, and hit 6 of 8 three point shots, for the Golden Bears. A lot of that came from capitalizing on the Beavers' trapping double teams on defense, which allowed Crabbe to slip away from coverage. Cal was able to reverse the ball for Crabbe to take uncontested shots.

Oregon St.'s inability to keep a man on Crabbe, allowing him to catch the ball with options to shoot, drive, or pass, was a major key to the game. 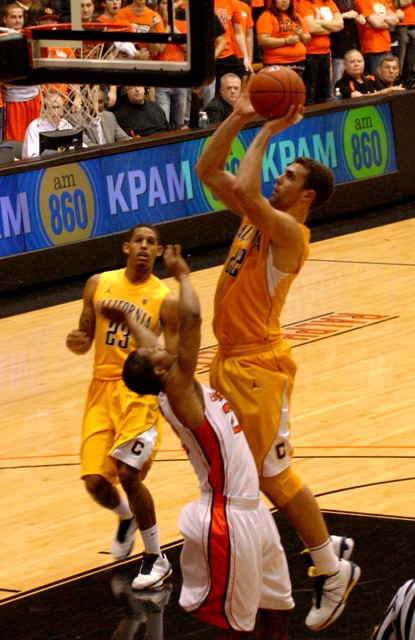 Sanders-Frison, who described the game as easily one of the five most physical games the Bears have been involved with all season, added 16 points. The Golden Bears also got 14 points, and 9 assists, from Gutierrez, and 12 from Kamp (above). Also of note, Smith played all 40 minutes, Gutierrez 39, and Crabbe 38. 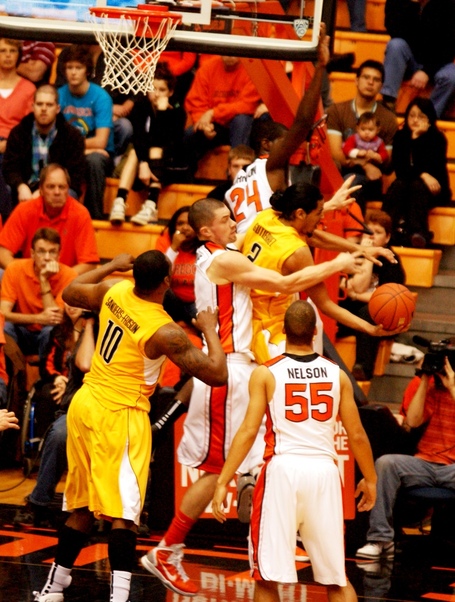 Whatever one's opinion is about Cal's crashing and banging style, the importance of their conditioning, both physical and mental, which allowed them to play so many players for so many minutes, while engaging in such a phsical style of play, can't be understated. Bears coach Mike Montgomery has his starters in battle condition like no other team in the conference. 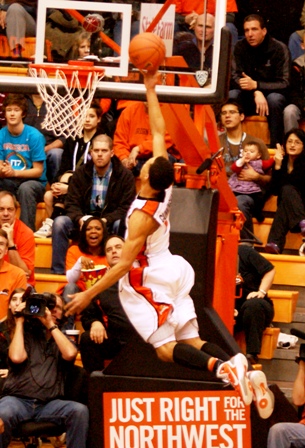 Starks led Oregon St. with his 18 points. Cunningham (above) finished with 14 points, and Omari Johnson, one of the four seniors playing in their last home game, added 10.

Among the other seniors, Haynes scored 9 points, Wallace, who made only 2 of 10 shots, 6 points, and Daniel Deane (scoring below) 2. 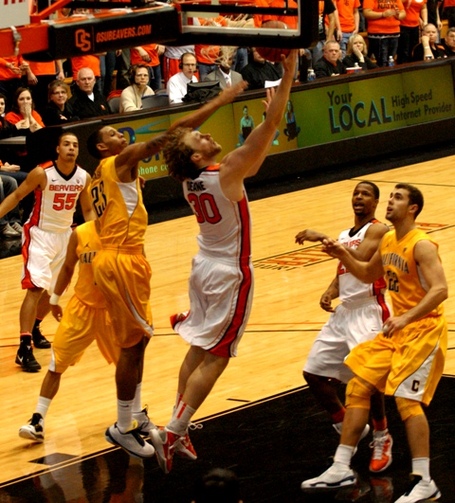 A big component of Cal's win was the combination of fouls called and free throw shooting. The Golden Bears made 21 of 31 free throws, while the Beavers only 11 of 19.

It was also the second consecutive game in which the Golden Bears have recovered from a 14 point first half deficit to win by a double digit margin, having defeated Oregon 81-71 Thursday night.

California (16-13, 9-8) pulled into fifth place in the Pac-10, and assured themselves a non-losing season with the win. The Golden Bears have only a visit from arch rival Stanford (14-14, 7-10), who again avoided a 5 game losing streak by defeating Oregon 88-71 this afternoon at Matthew Knight Arena, left on their schedule before heading to the Staples Center for the Pac-10 Tournament. The Ducks (14-14, 7-9) dropped into seventh place, and one of the slots that must play on the first day of the Conference tournament.

Finally, a word from one of our sponsors-

PLAY THE MARCH TO THE CHAMPIONSHIP GAME AND YOU COULD WIN A TRIP FOR TWO TO LAS VEGAS!

LOOK FOR THE CODE INSIDE SPECIALLY-MARKED PACKAGES 12-PACKS OF BUD LIGHT ENTER CODE AT FACEBOOOK.COM/BUDLIGHT

No Purchase Necessary. Open to U.S. residents (except CA & TX) 21+. For a chance to win a Grand or First Prize, Game Period 1 begins 3PM CST on 2/14 & ends 3PM CDT on 3/18. For a chance to win a First Prize only, Game Period 2 begins 3:00:01PM CDT on 3/18 & ends 3PM CDT on 4/30. To participate, obtain a Code from inside specially-marked packages of Bud Light beer or to request a Code without purchase, visit budlight.com/freecode during a Game Period. Limit one (1) free Code request/day/person or email address. To play, text HOOPS to BEERS (23377) & follow prompts or visit budlight.com/freecode & follow instructions. See Official Rules inside package or at budlight.com/freecode for complete details. Void in CA, TX & where prohibited. Enjoy Responsibly – ©2011 Anheuser-Busch, Inc., Bud Light® Beer, St. Louis, MO