The California Golden Bears take on Oregon St. in the final home game of the season for the Beavers. 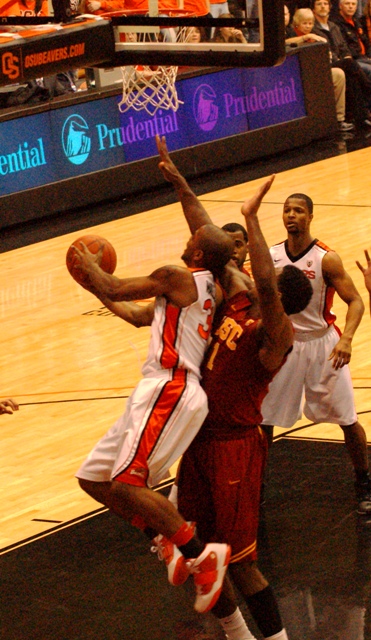 It's Senior Day for Calvin Haynes, Lathan Wallace (right, driving, with Haynes preparing to rebound), Omari Johnson, and Daniel Deane. The four are the last Beavers that date to before the arrival of Coach Craig Robinson, to the disaster that was the end of the Jay John/Kevin Mouton era.

Both teams come into the game on something of a mini-roll.

Cal came back from as much as 16 points behind in the first half at Oregon on Thursday night, and won going away, 81-71. This win, Cal's seventh straight over Oregon, puts the Golden Bears on a two game winning streak, after upsetting UCLA last Sunday night by a 76-72 count in overtime. Cal is only a half game out of fourth place in the Pac-10 race.

Jorge Gutierrez again led Cal, as he did against UCLA, with 23 points against the Ducks, including 16 in the second half. The Golden Bears got a lot of other perimeter production as well, with Allen Crabbe contributing 19 points, and Brandon Smith 18.

Oregon St. fell behind early as well, going down by double digits in the first half for the 10th. time in 15 Pac-10 games. But unlike the first 9 times, Thursday night the Beavers not only fought back (repeatedly), they eventually not only overhauled Stanford, they won going away as well, with Jared Cunningham and Haynes putting exclamation dunks on the 87-80 win over the Cardinal.

Cunningham led a balanced Beaver attack, with 21 points, and Haynes added 14 off the bench. But they got a lot of support, as both Joe Burton and Ahmad Starks had 11 points, and Roberto Nelson came up with his best game in weeks, with 12 points. Burton also had 3 assists, and Starks connected on three long three pointers.

had a double double, with 16 points and 11 assists, for Cal.Oregon St. also had 4 players in double figures, led by Cunningham's 15 points, including 10 of 11 from the free throw line. Separate runs of 8-0 and 10-2 in the first half by the Golden Bears put the Beavers well behind, and a scoring drought from the field of over 8 minutes in the second half buried Oregon St.

It was the second worst loss of the season for Oregon St., a result of shooting 32%, and 17% on three pointers, while Cal was connecting on 51% of their shots, and 42% of their threes.

The cause was Cal's ability to balance their offense, while Oregon St. had to rely almost exclusively on guard play. Burton and Kevin McShane had on basket each, while Johnson and Angus Brandt were shut out.

The Beavers MUST do a better job of scoring in the paint than they did against Cal the first time if they are to contend today against the Golden Bears, and also control Cal big men Kamp and Markhuri Sanders-Frison, who combined for 33 points against Oregon St. in Berkeley. Oregon did a pretty good job of that, holding both in single digits.

In related news, Cal has just been placed on 2 years probation by the NCAA for un-permitted phone calls to recruits. CGB has the details on the situation.

We'll be back after the game with complete coverage. Meanwhile, feel free to add your observations on what should be a pretty good game, and share any "senior moment" thoughts about the Beavers' seniors.