Oregon St. and UConn meet at noon 12:30 west coast time (first pitch was pushed back due to weather induced travel complications for Connecticut), and the key to the story is the location. These teams are meeting in Corpus Christi, Texas, where the weather may actually be conducive to baseball, rather than winter sports. (Note that the Huskies are from UConn, not Yukon, but there isn't THAT much difference when it comes to February baseball.) 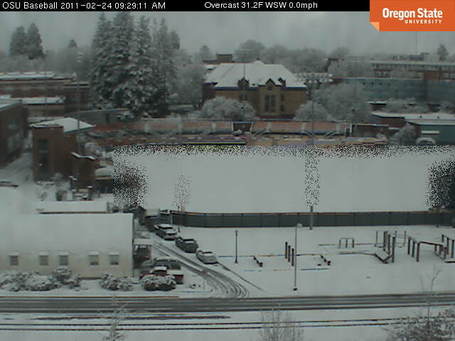 When the Beavers left Corvallis Thursday, it wasn't looking like playing at Goss Stadium in the immediate future would have been an option.

The game is the first of three games in three days for both teams, in the opener of the Kleberg Bank College Classic, hosted by Texas A&M CC (which is for Corpus Christi, not Community College), whom the Beavers will play Saturday, and the Huskies Sunday. Indiana (1-2) is the fourth team in the round-robin affair.

The Islanders (5-0) of the Southland Conference are no soft touch, by the way, despite what their name may imply. They already have an 8-7 win at seventh ranked Texas to their credit.

The Beavers will send right hander Sam Gaviglio, who is still looking for his first decision, after working 6 2/3 solid innings in the opener last Saturday in the season opener against Gonzaga, to the mound. The Huskies will counter with lefty Elliott Glynn (0-1, 5.79), who took the loss in Connecticut's 10-2 loss in their opener last Friday against Purdue.

Gaviglio gave up two unearned runs in the top half of the first inning, but left the game with a 3-2 lead in Fresno, where all four of Oregon St.'s games were real dog fights.

The Beavers eventually battled back to claim a 4-3 win in 11 innings in the opener, and took what was a relative blowout from the 'Zagdogs Sunday, 4-2. But Fresno St., hosts for the weekend, were a tougher bunch of Bulldogs,taking 2-1 and 5-4 wins from the Beavers to finish out opening weekend.

The Huskies found the going challenging in the Big Ten/Big East Challenge last weekend in Florida, following up their first day loss with a 3-2 setback against BTD contributor fanoverboard's Minnesota Golden Gophers, before picking up their first win of the season, in a 16-9 slugout victory over Michigan.

Last year, UConn went 48-16, and was knocked out of the post-season by Oregon.

Whataburger Field is also home to the Corpus Christi AA affiliate of the Houston Astros.

Oregon St. will wrap up the weekend trip Monday with a stopover in San Antonio, for a single game against University of Texas San-Antonio.

It's a great day for Beaver baseball somewhere, so hook up the headphones and listen in to Jay Reese's call of the game to get you through the afternoon of the last day of the work week, and add your insights on how the Beavers' season is starting off below.