Here is the recap from tonight's annual recruiting dinner at the Oregon Convention Center. Go Beavs! 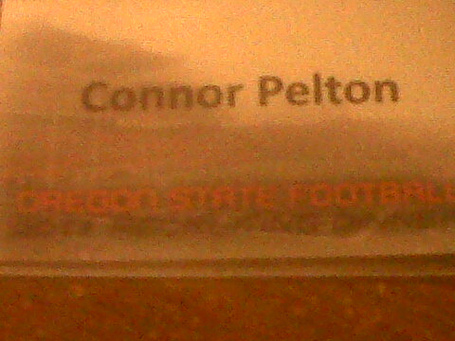 I am too legit

After a welcome from Mike Parker, Mike Riley took the stage to a standing ovation and talked about the recruiting process. While some guys are highly touted throughout their high school careers, some show up in the numerous camps held across the country. He made sure that everyone knew how hard everyone on the staff works at evaluating and picking out the right players for the program, and then comes the process of meeting with their coaches, family, and counselors to get comfortable with the kid and make sure he is good academically.

Petros Papadakis then took the stage and talked about why he loves Oregon State so much, and how great a job Mike Riley and the coaching staff have done. He said that when he played at Parker Stadium with USC in 1997, the players made fun of the one side that looked like it belonged at a high school. But now, it is one of the nicest facilites in the Pac-12 and looks like a "spaceship".

After Riley and Petros' statement, things really got going with the defensive recruit video highlights.

Two players really stood out, the first being 3 Star DE Dylan Wynn. Wynn's speed and strength coming off the line were absolutely amazing, the type of player that Beaver coaches have loved over the years. I could definitely see this guy being the next Stephen Paea.

The next guy was 3 Star DL Akeem Gonzales. I hadn't heard anything about Gonzales up until today, but his highlights got many oohs and ahhs from Beaver Nation. Gonzales loves to hit, similar to former Beaver Keaton Kristick.

After the highlights, Mark Banker took the stage for a Q&A with Mike Parker. Banker discussed that even though we signed nine players on Devensive End, many of them could be switcing to Linebacker if they have the speed. And after watching the hgihlights of these guys, most of them certainly do have the speed.

When asked if any of these guys would make it to the NFL despite not showing up on ESPNU this morning, Banker jokingly replied "No". Mike Parker then pointed out Brandon Hughes who was in attendance, to which Banker said "Thank god for Brandon, or we would have given up 100 in the Louisville game."

Then it was time for the offensive highlights, where three players really stood out. The first was 2 Star Larry Scott, who I can't believe is a only a two star after seeing his highlights. Scott made acrobatic catch after acrobatic catch, and his speed is incredible. I think Scott is the type of player that can have an immediate impact for the Beavers come September.

The second player was 3 Star RB Malcolm Agnew. Agnew actually runs a lot like Quizz, except taller and faster. The final player was 3 Star QB Peter Ashton, who resembles hated but respected rival Darron Thomas. It will be interesting to see how Ashton comes through the Oregon State offense, but he seemed to run the spread option to perfection in his highlight reel. The only problem for Ashton is that we are loaded at QB, but I could see him taking over the No. 3 spot behind Cody Vaz if he has a great Fall Camp.

After the highlights, it was Danny Langsdorf's turn to take the stage for a Q&A. Langsdorf first talked about the general rule of taking one Quarterback per class, and they decided to make a run for Ashton because they think the sky is the limit for him.

Langsdorf then discussed the process of still recruiting a kid after he has already committed to another school, something that happened twice for the Beavers this season. OLB Jabral Johnson commited to Arizona back in May, but the Beavers persuaded him to visit Corvallis in August and he fell in love with the program. The other player was WR Brandin Cooks, who also committed to UCLA very early. But the Beavers felt it was a "soft" verbal, and the extra work paid off for the Oregon State staff as Cooks ened up being the only four star to sign with the Beavers.

The final thing that Langsdorf talked about was the three players that Oregon State signed out of Oklahoma. He said that they feel Oklahoma is "under-recruited" by other schools, and the Beavers have used the Rodgers-Connection from Texas and brought it up to Oklahoma.

The night closed with Petros Papadakis returning to the stage to interview the six former Beavers in attendance: Keith Ellison, Brandon Hughes, Alexis Serna, Kyle Devan, Dwan Edwards, and Andy Levitre. The players talked about the coaching staff and the great job they do, both with recruiting and x's and o's.

The players then discussed what they miss most about Corvallis, with almost every answer being the Reser Stadium experience on Saturday's. Andy Levitre even got an OOOOOOOO-SSSSSSSS-UUUUUUUU Chant going throughout the Portland Ballroom.

Before everyone left though, Mike Parker presented Petros with a #35 Oregon State Jersey, which he put on in front of a standing ovation.

All in all, it was a great night for Beaver Nation. If you haven't attended the recruiting dinner, I would highly recommend it. The food was great, and I got to meet Ryan Gunderson, who looked incredibly bored until I told him I attend Central Catholic.