Beavers Come From Way Back To Beat Ducks

Share All sharing options for: Beavers Come From Way Back To Beat Ducks

The Beavers' first year coach Scott Rueck's halftime speech surely didn't include the phrase "we've got them right where we want them", but he said something right.

The same Oregon St. team that suffered a scoring drought of nearly 8 minutes in the first half, while Oregon went on a 24-0 run, stormed out of the dressing room, and scored 12 straight points themselves, while holding the Ducks scoreless for nearly 7 minutes.

El Sara Greer, who had arguably the best game of her career, pulled the Beavers within one point, trailing just 44-43 at the 9:34 mark, and Sage Indendi's three pointer pulled Oregon St. within 47-46 with 6:42 left.

Oregon answered both times, and again, after Earlysia Marchbanks at last got the lead back for the Beavers with 5:35 left. Greer tied the game, and then gave Oregon St. a 57-56 lead on a free throw with 2 minutes left, but Amanda Johnson answered yet again for the Ducks, burying a three pointer.

Finally, Greer pulled Oregon St. into yet another tie, at 59 apiece, with 1:14 left. She missed the free throw for the lead, but Alexis Bostick pulled down the rebound, and after drawing a foul, sank what would be the game winning free throws with 57 seconds left.

"El [Sara Greer] dominated inside, so we just kept feeding her the ball," Marchbanks said.

There was still work to be done though, as the Beavers' defense prevented a good opportunity for the Ducks on two additional possessions. Both Deanna Weaver and Johnson missed three pointers, and Weaver also missed what would have been a game tieing putback in heavy traffic with 2 seconds left.

"We finally finished a game," Rueck said. The win was just Rueck's second Pac-10 victory, despite being with 10 points or fewer at the end in 8 conference losses.

Greer was dominant inside, especially in the second half, and finished with a 21 point, 13 rebound double double, the seventh of her career, which led everyone in both scoring and rebounding.
Marchbanks (15, below) added an additional 17 points for Oregon St. 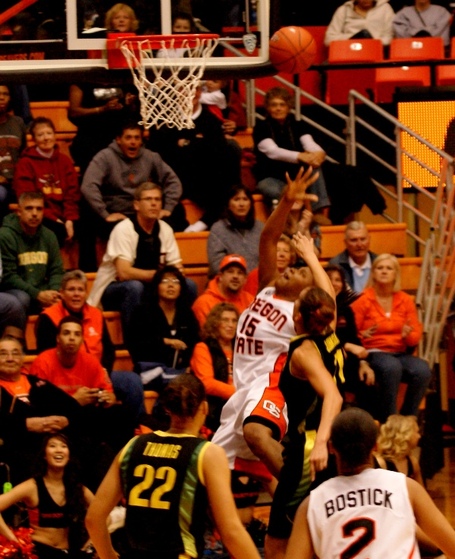 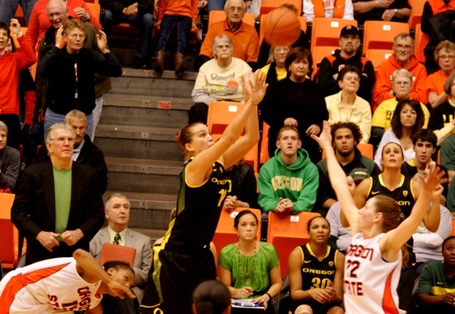 Johnson (11, above, shooting over Oregon St.'s Sage Indendi) led Oregon with 18 points, including 4 of the 11 three pointers the Ducks knocked down. Eight of Oregon's long-range shots came in the first half, and was a big factor in building the Duck's early lead. Oregon St. connected on only 4 of 22 three pointers.

When the Beavers overcame the 20 point halftime deficit it was the biggest halftime margin they have overcome to win since January 24, 2007. That, ironically, was also against Oregon, at McArthur Court, where the Beavers were down 34-16 at the half and came back to win it 65-59.

The Beaver win, in front of over 3,100 fans, the largest crowd of the season at Gill for the women, prevented a complete Civil War sweep of the basketball season.

Oregon St. (9-16, 2-12) remains in last place in the conference, but pulled within one game of ninth place Oregon (12-13, 3-11), after winning their second game in their last four outings. The Oregon schools head for the Bay Area this week, with Oregon St. visiting Pac-10 leading Stanford Thursday.