It is almost time for Oregon State baseball! 2011 preview edition

Share All sharing options for: It is almost time for Oregon State baseball! 2011 preview edition 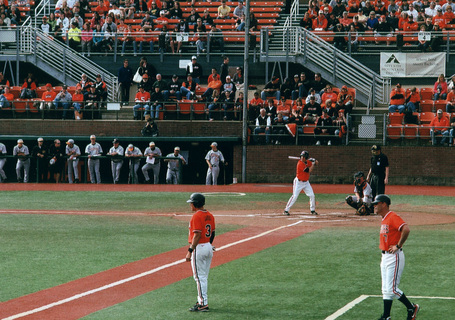 Once again we find the sun is starting to show itself, albeit in a cold and rainy way, and we sense those spring "showers" oh so close. That means that it is almost time for OSU baseball! It is a time for fanoverboard to begin waxing poetically about peanut shells and those first base side seats, and for me to describe once again that freshly cut spring grass smell filling my memories of playing outfield oh so long ago! It is a time to also put behind us a challenging 2010 campaign and move into what I see as a possible new era of talent and potential.

We'll be a different club, I don't think we'll be as one-dimensional as we were last year. I thought we were pretty one-dimensional last year in a lot of situations. (Coach Casey, Season Opening Press Conference)

As part of getting ready here is my annual baseball preview, which I hope will instill some of my love of the game and excitement for the upcoming season on to Beaver Nation.

My "preview" thoughts are after the break, but here are some primer stories I thought were of interest and hope will help get everyone excited about the upcoming season:

Did you know 10 Oregon State players on the 2011 roster have already been selected by MLB clubs but decided they wanted to become Beavers? That's true. They are: Carter Bell, Tony Bryant, Dan Child, Adam Duke, Sam Gaviglio, Garrett Nash (twice), Jordan Poyer, Jake Rodriguz, Susac and Ben Wetzler. Four of the 10 - Child, Duke, Rodriguez and Wetzler - had the opportunity this past summer to sign but elected to come to Corvallis. (2011 Baseball Preview: The Beavers (OSU Athletic site)) 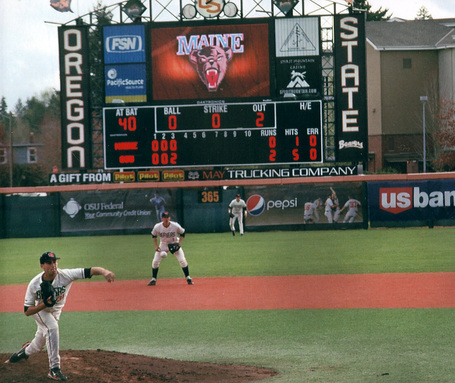 Some of us have already been discussing the upcoming season and a lot of my thoughts revolve around this previous discussion, which I'm looking forward to more of throughout the season.

1. Will this OSU baseball team return to tradition and small-ball dominance? I think at a very basic level the first main question is can the offense return to that smart play we came to expect under Coach Casey's leadership? What has been very much lacking the last couple seasons has been smart and aggressive batting and base running. As noted in my review of last season this is interesting because at the stat level the Beavs seemed to outplay their opponents: 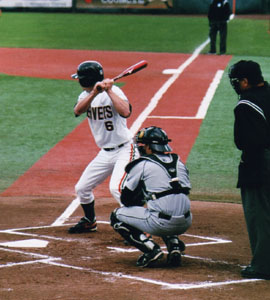 This translates to what I think is a key consideration and the stats not really shown here include things like making the hits at the key times, keeping the batting aggressive all the way through the line-up, bunting well, and making good decisions on the bases that allow for scoring opportunities. There has already been a good discussion about the whole taking the first strike pitch. I think this gets at a bit of that aggressiveness that doesn't show up in the stats. Are OSU batters keeping opposing pitchers honest with working counts deep, hitting strikes that need to be hit no matter the count, getting leadoff batters on base, and also keeping things lively on the base paths?

I think this sums it up well (from the Gazette-Times):

"We feel we will find a true leadoff guy this year," Casey said.

Casey isn't looking for the fastest players, just ones who can get on base.

"They can run back to the dugout pretty fast from home plate in that one or two hole," Casey said, with a laugh. 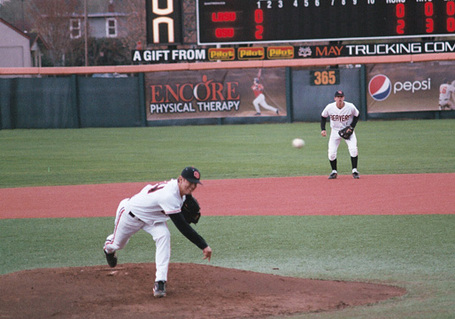 2. Pitching? Wow, this is another huge one and an issue people have already hinted at as possibly the most important one for the season. I believe so. The team lost a lot of seasoned pitching to the draft last year, such as Greg Peavey (left), and we now have a very young bullpen this season (if my count is correct there are eight freshman on the roster this year). Last season I thought the pitching was wildly inconsistent and especially in terms of we never seemed to have starters, middle relief, and closers on the same page. One game the starters put the team in a big hole, another game the mid-relief gave a close game away, or in other games the closers lost the games in the final innings. There were only a few games overall where we had the pitching staff clicking on all cylinders all the way through the game's rotation. For a successful season I see a lot of the team leadership overall coming from a solid and well rounded pitching staff.

3. On the field leadership? I know, I know, I always seem to harp on this, but really what has in many ways separated the 2006 and 2007 seasons from the following ones? The lack of players such as Darwin Barney who instill a sense of team identity and drive both on and off the field. At certain times I do believe in a team that can create a strong identity without a strong centralized leader, but just again feeling this season there is a need for someone to step it up. I don't seem to be the only one either:

What we really need is leadership from the guys who have been there before to help them [the young pitchers] get through it....There is no reason we shouldn't have people that are experienced enough playing some key spots and help those guys through it because freshman are going to make mistakes no matter how good they are. We will live with those mistakes just as long as it takes for them to grow up because they are going to be in the fire early. (Coach Casey, Season Opening Press Conference)

4. Is the Pac-10 as good as people say? And what does this mean for the Beavs? Yes it is a good conference, and I think there are some interesting specific storylines happening for various teams. There has been enough talk already about the UO, so not going to give that storyline any more justice. But UCLA has huge expectations placed on its shoulders this year. What about ASU? Or what about Cal in its final season? Or SC and will that storied program bounce back this year? Who are the sleepers: Stanford or OSU or WSU or UW? Sure I'm a bit OSU baseball homer fan, but I do think the Beavs can create some really good storylines themselves this year within conference play.

5. To post-season or not to post-season? Post-season is an expectation for OSU baseball now, and I don't see any reason not to expect this. Sure there are a lot of unknowns this year, but I have every confidence under Coach Casey this team will be competing at a high level. I just don't know how high of a level that will be.

Casey said it wouldn't be a surprise to see some players starting you might not expect. All starting positions must be earned, regardless of past success.

"There is competition going on and I think it will be a surprise to a couple guys that are supposed to be guys for us who won't be starting because of their lack of intensity and their satisfaction with themselves," Casey said.

All in all I'm very exciting for my favorite team and my favorite sport. Do I know where all of this is headed? Not in the least this season, and that both scares me a bit and makes me excited for the possibilities. What are your thoughts? 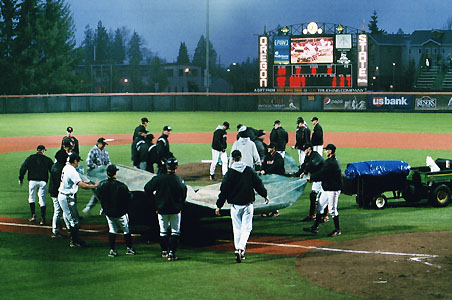