There has been a blanket of near-freezing fog over Corvallis nearly all week, and Oregon St. apparently left their shooting touch out in it.

Meanwhile, the Vandals were at least average, shooting 50% from the field, and 70% from the line. With decent 3 point shooting, 10 of 18, Idaho was never in any danger.

Oregon St. led 2-0 and 4-2, but Idaho then went on a 10-0 run, and was in control the rest of the way. The Beavers managed several mini-rallies, but never took momentum, and the Vandals were always able to quell the uprising.

"This was the collective basketball equivalent of a bad day at the office," Oregon St. coach Craig Robinson admitted, "myself included. It happens to everyone, but usually, it doesn't happen to nearly everyone at the same time, where the legs go, the timing is off, and nothing goes right. Tonight, it did."

Jared Cunningham, who came into the game as the Pac-12's leading scorer, missed every shot he took from the field, and finished with 7 points, all from the line. His 0-9 from the field shooting night, including 0-6 on 3 pointers, may have been the worst game of his life. And Robinson game Cunningham ample time to try to work out of his slump, playing him 36 minutes.

Were it not for a pretty good defensive effort by the Beavers, especially in the first half, it could have been a 24 point loss. Had it not been for Joe Burton's strong overall effort, it would have been. 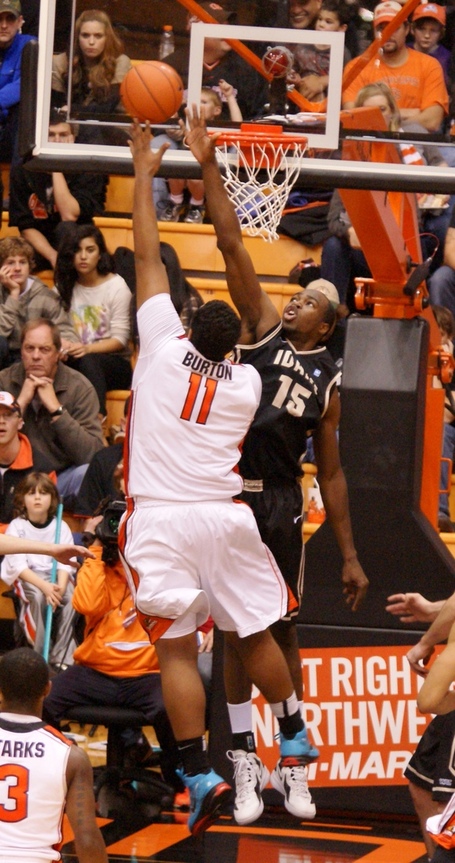 Burton finished with 15 points, 8 rebounds, 2 assists, 2 steals, and a blocked shot. And he tried to get others involved with his passing, but poor team shooting hid that from the stat sheet.

And it should have been a 24 point loss, had Idaho coach Don Verlin not gone away from his best weapon for much of the second half, opting instead to work on who knows what, as the Vandals spent a lot of time with no apparent offensive objective.

Deremy Geiger led everyone, with 27 points for the Vandals, hitting 8 of 10 shots, including 7 of 9 3 pointers, and also all 4 of his free throws. Yet he only took 2 shots for a significant segment of the second half. Had usually accurate Stephen Madison made more than 2 of his 11 shots, or Idaho had had Geiger shoot with regularity, the game would have been a blowout.

But while Idaho's offense lacked focus at times, one thing it did not lack was ball movement. Whether on the dribble or with passes, the Vandals kept the ball moving, forcing the Beavers to expend considerable energy on defense.

And when Oregon St. couldn't hit the broadside of the barn that is Gill Coliseum, Idaho was able to sit back in their zone, and out-rebound the Beavers 42-36. 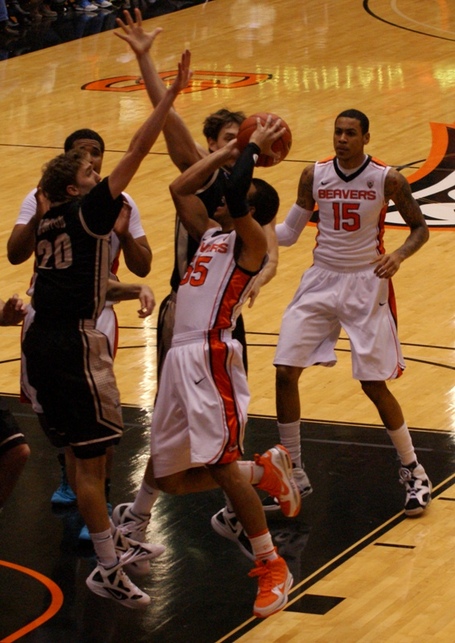 The one other Beaver to have more than an occasional good moment was Roberto Nelson, above (55), who came off the bench to lead Oregon St. in scoring, with 16 points and 6 rebounds, in 28 minutes.

Meanwhile, Geiger got 13 points of support from Landon Tatum. And while Madison was missing most of his shots, he pulled down a dozen rebounds, and handed out 5 assists. 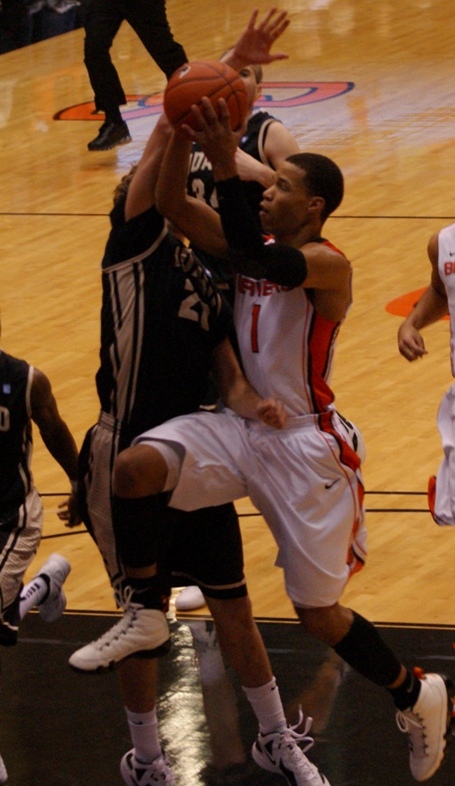 Jared Cunningham struggled to find points against Idaho, missing all the shots he

took from the field.

Besides the weather, the combined impact of finals week and the death Wednesday of freshman football DT Fred Thompson could have had a lot to do with Oregon St.'s struggles, especially Cunningham, who, like Thompson, is from Oakland, CA. Cunningham's sister went to high school with Thompson. 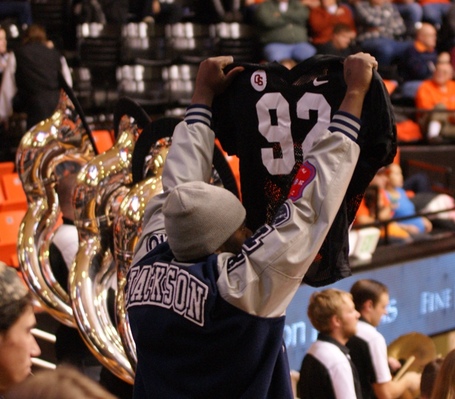 who passed away Wednesday from a heart attack while playing basketball.

"We certainly had plenty of distractions this week," Robinson said. "But that's a life lesson, not an excuse, for these young men. There's a lot to learn from tonight, because you have to keep going."

Despite the completion of finals, and the onset of the holidays, Gill was over half full, with 5,119 on hand.

"Our crowd was great, considering everything," Robinson felt. "A whole lot of students stayed around for tonight, and a lot of season ticket holders turned out as well."

Idaho was bouncing back from a last second, 66-64 home loss to Washington St. Wednesday, and improved their record to 5-4 for the year.

After receiving votes in the AP basketball poll for the first time in years, Oregon St. made sure that won't be repeated for a while, and fell to 6-2 for the season with the loss.

"It's my job to get them ready for the next game," Robinson added. "But with this group, I don't anticipate that will be a problem. They had played well in every game before tonight, so I think this will prove to be an anomaly."

The Beavers return to action Tuesday night, with the third game of the current 5 game home stand, when they will face Illinois-Chicago from the Horizon League at 7 PM. The game will again be on ROOT Sports Northwest, as was tonight's contest.

The Flames are 2-5 at this point, though they have lost their last 2 games by a total of 5 points, one of them in overtime. They host so far winless Northern Illinois tomorrow before making the trip to Corvallis.