To be clear, this is NOT a basketball game report. It could be an Arena Football League game scoring summary, and it was played in an indoor arena. But no, the Valero Alamo Bowl was a "regular" football game. Except there was nothing normal about it.

The offensive numbers are mind numbing. Price completed 23 of 37 passes, 62%, for 438 yards, and 4 touchdowns, with no interceptions, and ran 5 times for 39 yards and 3 more touchdowns. Polk pounded out 147 yards, and another score, on 30 carries.

In all, the Huskies rolled up 620 yards from scrimmage, and added 240 more on returns, for 860 total yards, 8 touchdowns, and 27 first downs, and converted on 3 fourth downs. And it wasn't nearly enough.

Griffin, though outshadowed at times by Price's spectacular performance, nevertheless completed 24 of 33 passes, 73%, for 295 yards, and a touchdown, and ran 18 times for an additional 55 yards, and another touchdown.

But it was the Baylor running game that really made the difference, especially late the Washington defense became progressively more gassed as the game wore on. Ganaway rumbled for 200 yards and 5 touchdowns on 21 carries. Ganaway had the last 2 of Baylor's 9 touchdows, bringing the Bears from behind in the fourth quarter, after Price had put the Huskies ahead 56-53 with 9:40 left.

Ganaway also had consecutive touchdowns late in the third quarter that gave Baylor a 53-49 lead heading to the fourth quarter. And he had the longest scoring play of the night, an 89 yard third quarter run. In all Ganaway scored 4 of the last 5 touchdowns of the game, and 5 of the last 7, as the Bears rallied from 18 points down, after Price hit Jermaine Kearse, who was the game's leading receiver, with 198 yards on 5 catches, for an 80 yard scoring strike a minute after halftime.

And Ganaway was only one of three Bears to rush for over 100 yards, as Jared Salubi ran for 101 yards and 2 touchdowns, on 5 carries, and Tevin Reese added another 101 yards, on just 2 carries, with 78 coming on the run that set up Ganaway's score less than a minute before the end of the third quarter.

Baylor rolled up 482 rushing yards, and 777 total yards from scrimmage, good for 33 first downs, and the 9 scores. Coupled with 181 return yards, the Bears piled up 958 total yards.

In case your calculator has burned up, that's 1,397 yards from scrimmage, and 1,818 total yards. The offensive explosion eclipsed the bowl record set by Arizona St. and Rutgers in the 2005 Insight Bowl. 77 plays resulted in either a first down or a touchdown. The 123 points were just 2 points short of the all-time bowl scoring record, Marshall's 64-61 win over East Carolina in the 2001 GMAC Bowl, and that was set in a double overtime contest.

Baylor scored on each of their 3 first quarter possessions, jumping out to a 21-7 lead, and had more first downs than Washington had plays run in the opening period, as Griffin completed 12 of 14 passes, for 118 yards, and the first score of the game.

Washington's defense had a good second quarter, as the Huskies ran off 4 consecutive touchdowns. Cort Dennison's sack stalled one Baylor drive, what would have been another sack had Griffin not fumbled the ball ended the Bears next drive. 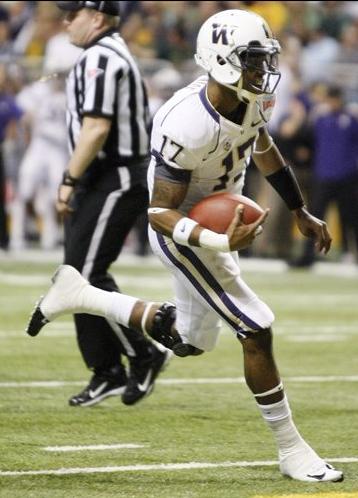 Meanwhile, Price, above, was completing a pair of touchdown passes that tied the game, and then added a rushing touchdown for a 28-21 Husky lead.

Then the Huskies forced the only turnover on downs the Bears suffered on 4 4th down attempts, which led to a 56 yard Polk scoring run that gave him 107 yards before the break, and put Washington up 35-21 31 seconds before halftime.

Griffin, below, calmly drove the Bears into range for Aaron Jones' 42 yard field goal that got Baylor back within 11 points at the break. 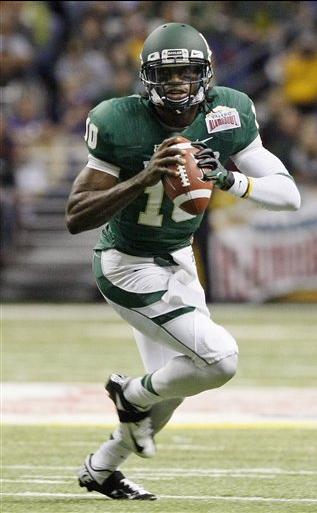 Price's bomb to start the second half opened the game's largest lead, and it looked like the Huskies might pull away. But Baylor answered, with a 10 play, 80 yard drive, and the offensive numbers reached 801 yards, and 73 points, in just 34 minutes.

Just as it looked like no one would ever stop anyone, the two defenses rose up, and each forced a 3 and punt. However, Washington was unable to capitalize on a 46 yard return by Kasen Williams, as Polk was hammered, and fumbled the ball.

On the next play, Ganaway was off and running for his 89 yard touchdown, and Griffin pulled Baylor within 3 points with a jump pass to Jerod Monk., making it 42-39, seconds after Washington had been in position to open an 18 point lead.

Price responded by hitting Kearse for 60 yards, and then Devin Aguilar for a 13 yard touchdown, on the next two plays, putting the Huskies back ahead by 2 scores just 44 seconds later.

Griffin's 23 yard pass to Levi Norwood pushed the game past the 1,000 yard mark, and Salubi's 24 yard run set up a 1 yard Ganaway scoring dive that pulled the Bears within 49-46 put the point total at 88, not even half way through the third quarter.

An out of bounds kickoff gave Washington a short field, but the Huskies couldn't capitalize, as Erik Folk missed a 43 yard field goal. It was the second Husky drive in three possessions that got inside the Baylor 30 yard line that did not produce any points, and it seemed to take the wind out of Washington's sails.

Josh Shirley sacked Griffin, but Reese ripped through the Washington defense for his 78 yard run, and 3 plays later, Ganaway pushed Baylor ahead 53-49 a minute before the end of the third quarter.

Baylor was over the 400 yard rushing mark in just three quarters.

Polk and Price put together a 13 play drive that covered 68 yards, and chewed up 6 minutes and 18 seconds, before Price's 8 yard run gave Washington their last lead of the game, 56-53. Coupled with the quarter change, the Husky defense was off the field for over 10 minutes, but they were unable to make any adjustments, or get their wind back, and Griffin completed consecutive passes to Kendall Wright, for 48 and 7 yards, and Ganaway pounded in for another score, as Baylor covered 70 yards in just 1:25.

Due to Folk's missed field goal, Washington, trailing 60-56, needed a touchdown, not a field goal, as coach Steve Sarkisian tried to mount a drive for the winning score that wouldn't leave Baylor with much time to respond.

And Polk and Price managed to take almost 5 minutes off the clock as they converted a fourth down for the third time on the night, and drove the Huskies inside the Bears' 40. However, an incompletion brought up another fourth down, and Price overthrew Williams on the left sideline with 3:20 left. Washington wouldn't run another play.

Ganaway's 43 yard run capped a 3 rush drive for the game's final score, and after Danny Shelton fumbled the kickoff, Griffin actually deflated the total offense that reached the 1,400 yard mark in running out the clock.

The game couldn't have been more of a contrast from the Bridgeport Education Holiday Bowl the night before in San Diego, which featured inept offense and decent defense, instead of almost unstoppable offense and some of the most ineffective defense of all time. Yet both produced 11 point wins by Big XII teams over underdog Pac-12 opponents.

Baylor finished the season 10-3, tieing their program record for wins in a season, and picking up the Bears' first bowl win in 19 years, since the 1992 Sun Bowl.

Washington's loss left their season record 7-6, after the Huskies, who started the season 5-1, lost 4 of their last 5 games. All 6 losses were by double figure margins.

The Pac-12 is now 0-3 in the bowl season. Utah is up next, at noon pacific time Saturday, in the Sun Bowl in El Paso, against Georgia Tech. UCLA faces Illinois in San Francisco in the Kraft Fight Hunger Bowl on Saturday as well.