Share All sharing options for: Oregon State Basketball: Historical Perspectives and the 1980-1981 Season 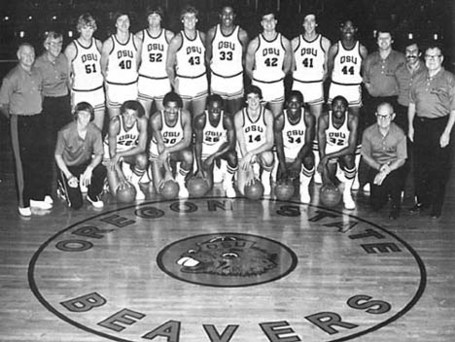 With the current pre-conference success of the OSU basketball team we now for the first time in many years are seeing small glimpses of the Orange Express tradition come back to Gill Coliseum. The Beavs this year have cranked up the offense and played some inspired overall defense against their non-conference opponents, at times reaching milestones such as 100 points for the first time in years, and scoring at least 90 points in four consecutive games for the first time since the 1980-81 season. What is starting to be very impressive at this early stage of the season is that we are now starting to hear about these comparisons and accomplishments that harken back to the greatest of all OSU basketball seasons: 1980-81 under Ralph Miller.

Now to be upfront I don't personally think this season yet is even close to being in the same league as the 1980-81 OSU basketball season, but I will admit it is fun to start to be able to think about the better years of a rich tradition. I mean this is the best start in 22 years! And even more amazing for such a program as OSU basketball that was the last time the Beavs played in the NCAA tournament (1989-90, and Gary Payton's senior year and back when I was going to school at OSU!).

Under the legendary men's basketball coach Ralph Miller, the 1980-81 season was historic at many levels. The team became known as the Orange Express and on the court during this time was the great Steve Johnson, who helped lead the Beavs to a 26-2 overall record. Steve Johnson, for this season, still holds the NCAA Div I record for single season FG % at 74.6%(235 of 315). The Beavs went 26 and 1 for the regular season and was ranked #1 for 25 weeks (easily a school record) and was undefeated until losing to Arizona State in the last game of the regular season.

The ending to this historic season continued the trend of disappointment seen in the final regular season loss to ASU. As much as the season will go down as the greatest to date it also goes down as one of the most disappointing as the team went into the NCAAs a number one seed to only lose to eighth seed Kansas State 50-48 in the opening game for the Beavs.

You want stats? The Beavers will give you stats. Defensively, they've forced 20.8 turnovers a game and averaged nearly nine steals every time out. Only once—against Southern Cal—had the Beavers appeared fairly human, by shooting less than 50%, possibly because the game followed by only 40 hours their inhuman 69.4% shooting against UCLA.

For the year, Oregon State had shot 57.3% from the floor, tops in the nation; if the Beavers maintain that pace, they'd set an NCAA accuracy record. This would fit nicely with Johnson's individual numbers. If he keeps up the 76.3% season average he had at the end of last week, he'd break his own NCAA record of 71.0% established last season, and his 67.3% career figure would erase the mark set by a fellow named Bill Walton.

Still, it's the neglected art of passing that sets Oregon State apart. "The Orange Express," locals call the team. The Clockwork Orange is closer to the truth, the Beavers' well-drilled patterns being so precise that surely there's no more entertaining team in the land to watch. Oregon State averages 24 assists a game and had 36 (on 39 baskets) in its 103-55 trouncing of Rhode Island. Afterward the Rams interim coach, Claude English, called Oregon State "one of the great passing teams of the era. I've never seen one as good at any level." (Kirkpatrick, C. http://sportsillustrated.cnn.com/vault/article/magazine/MAG1124175/1/index.htm) 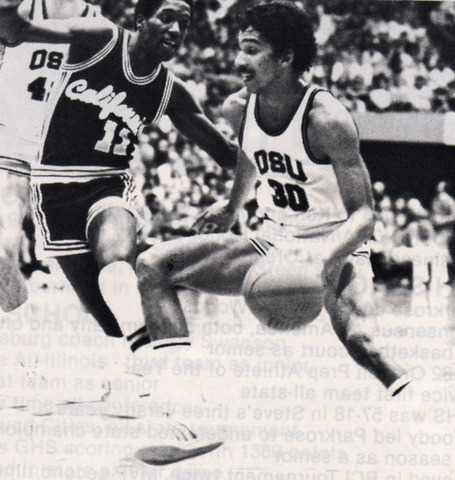 They were an eclectic group with diverse backgrounds, brought together by a legendary coach who took less touted players with heart and smarts, then molded them into refined basketball players. (Welsch & Edmonston Jr., p. 176)

Even with the end of the season disappointment the team still carries over to this day some impressive numbers and awards. Coach Miller received UPI, AP, and Pac-10 Coach of the Year honors. Steve Johnson finished his storied OSU career with All-American honors. Additionally this was the season that the Beavs finally beat UCLA in LA, which was especially impressive to note since this was only six years removed from John Wooden's final season at UCLA and done during Larry Brown's time at UCLA. At home the Beavs were almost unbeatable.

Sellout crowds of 10,000 were the norm, and the fire marshal looked the other way as every nook and cranny of creaky old Gill Coliseum was filled with hot-blooded Beavers. Students slept overnight in the cold rain on the steps of Gill to get prime seating. Boosters traveled with the team by the hundreds, even thousands, in the longest continuous athletic party in school history. (Welsch & Edmonston Jr., p. 176)

What I think though is more impressive is in terms of the larger picture of what this season was a culmination of, and what it allowed the program to build on. Between 1980-83 the Beavs had an overall record of 77-11 (DePaul's 79-6 record was the only one better during this time). Not only that, but the teams under Ralph Miller during this team racked up a mind-boggling 35-1 record at Gill Coliseum, which included a school record of 24 wins in a row.

Players like Blume, Radford, Connor, and Johnson made way for stars such as Charlie Sitton (a freshman during the 80-81 season), A.C. Green, and Gary Payton. Ralph Miller finished his career at OSU in 1989 at 359–186 and .659 overall, and is in the College Basketball Hall of Fame.

The Oregon State Beavers team was also featured in a main Sports Illustrated piece for the season: "No. 1 No. 1a," February 9, 1981.

"You have to honor Oregon State's outside people because they initiate the whole show," says UCLA Coach Larry Brown. "Their passing is so exquisite that everybody gets set up for open, easy shots by everyone else. If they find some rebounding, this could be a great team." Brown quoted by Kirkpatrick, http://sportsillustrated.cnn.com/vault/article/magazine/MAG1124175/1/index.htm)

In the end it was a team that peaked during an incredible run of basketball under Coach Miller. Sure it was a disappointing end to the season. I remember watching the team go into that last game against ASU with a perfect season on the line and lose by twenty, and I remember watching in depressed disbelief as Kansas State U. beat the Beavs in the first round. It was a difficult way to end such a powerful season for many:

"It was very hard on Ralph," Jean Miller said.

"You wouldn't of known it then, but he was very disappointed because that was such a great team and they were so beautiful to watch. I still hate to watch close games"

For me personally though, this was really my first serious fan's love of a team and a program. It was probably the single most important reason I became a Beaver, and even though I did not go to any of the games in person during this 80-81 season, it did lead me over the next decade to some of my favorite OSU basketball game memories, such as seeing Sitton, Green, and Payton play live and in person. I would say that in many ways this season, and indeed the years under Coach Miller were all contributing factors to things like the UO's "Pit Crew." I'm sure a reasonable Duck argument can be made that there are other factors much more important, but I'm just saying that the amazing success and home crowd spirit is a reason for the spirit found in Eugene's "Crew" (but will concede that I am not saying it is the reason). Ralph Miller in so many ways set a bar high in the State of Oregon for college basketball, and for many of us in Beaver Nation specifically. We have been waiting a long time to see some of that old Orange Express rolling again.

As such the 80-81 season was a defining moment in OSU basketball history that has set a standard that is still standing. Will we soon see a season to rival the 80-81 one? I don't know, but I personally still have those feelings of 1980-1981 when I look up at the banners in Gill Coliseum.

And lastly here is a nice piece about the 80-81season: