Share All sharing options for: Oregon St. Pulls Away From Portland St.

Oregon St. closed out their 5 game home stand with a solid, going away win over a tough Portland St. squad that gave the Beavers a tougher game than the final score indicated. Unlike the last couple of wins over over-matched middling mid-majors, where Oregon St. was never threatened, it took 3/4 of the game before it felt like the Beavers had finally taken control. Every time Oregon St. would string a couple of plays together that looked like they would take control, the Vikings would answer with a sequence that looked like it could be the start of a run. It looked and felt a lot more like a Pac-12 game than anything since the games against Texas and Vanderbilt.

But Oregon St.'s greater depth and talent eventually wore down Portland St., as it should have been, and the Beavers pulled away. Six Beavers scored in double digits, led for the second game in a row by Ahmad Starks, who hit 5 of 8 three pointers, and finished with 17 points.

Angus Brandt was right behind, hitting 7 of 8 shots, and 16 points. Jared Cnningham, the Pac-12 Conference's second leading scorer, added 15, and notably, broke a 3 game long drought on 3 pointers. Both Devon Collier and Roberto Nelson finished with 14 points, and Eric Moreland had the game's only double double, with 13 rebounds and 10 points.

"The team chemistry is great, and we are able to get out and run the floor better this year," Starks said of the balance the Beavers had.

It made the difference, as while Portland St. got a game high 19 points from Lateef McMullin, and 18 more by Charles Tapscott, only one more Viking, Michael Harthun, was in double digits, with 10 points.

Cunningham got to work on adding to his highlight video early on, but with a leaping lob to Brandt for a dunk on the fast break. But the Vikings hung around early, and one reason was that they didn't turn the ball over in the first 4 1/2 minutes.

But suddenly, 2 steals in a row led to 2 Starks jumpers for 5 points, and a 16-7 lead. A Brandt three pointer followed by a Joe Burton basket made it 23-10 less than 8 minutes into the game, and Moreland scored 6 straight points as Oregon St. opened as large as a 16 point lead in the first half.

Portland St. battled back, and a contributing factor was their ability to play 12:25 into the game before committing their first foul.

Cunningham couldn't convert on a lob from Burton that would have contended for the best sky-light highlight yet, but the Beavers got the rebound, and Cunningham's 5th. assist of the game set up a Nelson 3 pointer that put the Beavers up 35-20.

But despite another Cunningham highlight play, a reverse layin off a lob from Burton, and 3 blocked shots by Moreland, Portland St. still fought back within 42-34 by halftime. 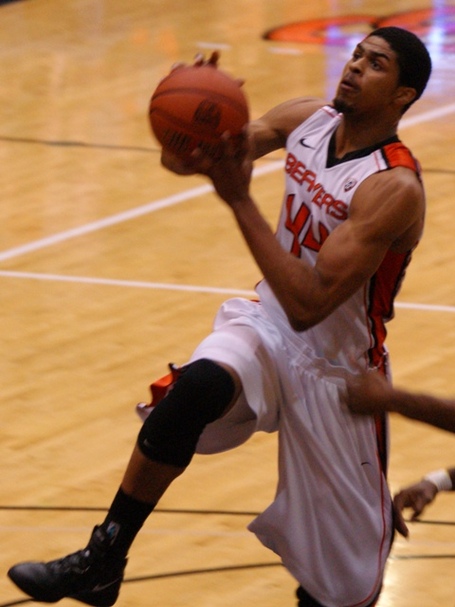 A Viking layin on the first possession of the second half made it a 6 point game. Cunningham connected on a 3 pointer, and Collier, left, folllowed with a dunk, but here came the Vikings again.

Oregon St.'s effectiveness on outside shooting was something of a problem as well though, as it kept them from getting to the line for a long time. McMullin's 2 + 1 meant Portland St. had made 9 of 12 at the line at the 15:47 mark of the second half, and Oregon St. had not yet been to the line a single time. And the Vikings were within 7 points, trailing only 55-48.

Starks and Brandt buried back to back 3 pointers, and it looked like Oregon St. might finally be going to make the run to pull away. But Tapscott sank a 3 pointer, and McMullin made a driving basket, and it was still a single digit margin until Nelson nailed yet another 3 point shot.

There was only 12:13 left in the game when Oregon St. first got to the line, and Nelson reopened a 10 point, 67-57 lead. This is one aspect of their game the Beavers are going to have to work on come conference competition, in the event they have another cold shooting night like some they suffered earlier in the season.

At that point, Oregon St. had made 10 of 16 three pointers, but would have been in serious trouble had they not been shooting 62% overall so far.

But the Vikings ran out of gas from that point on, as the Beavers went on a 34-11 run the rest of the way, with 7-2, and 9-0 runs that brought a good winter break crowd of 5,248, including former "Orange Express" greats Ray Blume, Mark Radford, and Steve Johnson, who were sitting together courtside, to their feet repeatedly.

"This was a nice way to end this home stand," coach Craig Robinson felt. "It started with a tough game with Montana, and then obviously the Idaho game was rough. But to be able to say that you are 4-1 in a 5 game home stand is really a nice feeling. To win this last one, in front of a terrific crowd is great. That student section has been with us through the exam period, and the vacation period. And our fans are starting to come out, which is really nice to see. I think that it helps our guys. Beaver Nation is starting to catch hold, and it is really nice for our guys."

And then one final time, as sophomore CJ Mitchell scored his first points for Oregon St., a pair of free throws that made the score 98-68, and then sank a 3 pointer that put the Beavers over the century mark for the second time this season, and the Orange Express was rolling again.

"We were ecstatic," Brandt said. "But I think as much as it was for us making a hundred, it was for C.J. (Mitchell) to come in and score 5 points at the end of the game. We were just as happy about that, if not more happy, than scoring 100 points."

It was the first time Oregon St. has scored 90 or more points in 3 consecutive games since the 91-92 season, and also the first time the Beavers have topped the century mark more than once in the same campaign in 20 years.

"We came in from the preseason with a lot of confidence we could play like this, and its coming together now," Cunningham explained afterwards.

Cunningham topped his career high of 6 assists Thursday night against Howard with a new career high of 8 tonight. But even that couldn't keep up with Burton, who just missed a double double, with 8 points, and 9 assists. In all, Oregon St. had 27 assists on their 40 made baskets.

"That assist stat doesn't really jump out to me with this team," Robinson said. "We have been assisting each other all year long, and in this game it was just more because we shot more today, and scored more points. I have been talking about the teamwork and the camaraderie of this team, and that is a good stat to take a look at when you have guys spreading it around like that. When you have Joe Burton with nine assists, and Jared Cunningham with eight, that is really nice to see."

Moreland posted a career high as well, with the 3 blocks.

The Beavers had 17 fast break points, and allowed only 4.

Portland St. (6-5) was embarking on a 4 game road trip, which will continue to the south, with a stop at Cal-State Fullerton on Thursday. The Vikings are a tough team, and they should contend in the Big Sky Conference race.

Oregon St. (9-2) also hits the road, for a quick trip to Chicago, for a game against the Chicago St. Cougars (0-11) at 7:05 PM CST (5:05 PM PST) Wednesday, followed by a team dinner put on by Stark's mother, as the Chicago native makes a trip home for Christmas.