After Oregon St. stymied several early Oregon drives, the Ducks identified the weakest aspects of the Beaver defense, and scored at will in the second quarter. Three Darron Thomas touchdown passes broke open what had been a tie game, and Kenjon Barner's score to cap the first drive of the second half put the game, and the initial Pac-12 North Division title, away.

Oregon (10-2, 8-1) will host UCLA (6-6, 5-4) next Friday evening in the inaugural Pac-12 Championship game. The Bruins backed into the Pac-12 South's berth in the title game despite being blown out of the LA Coliseum 50-0 by USC. The Trojans (10-2, 7-2) are ineligible for postseason play, and both Utah and Arizona St. lost Friday with their chance at the championship game on the line.

Things looked bleak for the Beavers right off the bat on a bright Saturday afternoon when senior WR James Rodgers warmed up in the pregame session, but the determination was that he would not play on the injured left ankle he suffered in last week's win over Washington, when a receiver throwback play blew up, and Rodgers got rolled up.

Things got worse quickly when quarterback Sean Mannion threw the ball directly to Oregon's Michael Clay on the game's third play. LaMichael James handled the ball on 5 of the 7 plays it took the Ducks to open a quick 7-0 lead, and James became the all-time leading scorer in Oregon team history.

And when another drive went no where when Oregon St. ran its familiar throw a pass on third down that is short of first down distance, and Johnny Hekker shanked the punt for only 10 yards, it appeared the rout would be on sooner than later.

The Beaver defense turned in some heroic efforts over the next several possessions, however, forcing the Duck offense to turn the ball over on downs on three consecutive possessions. 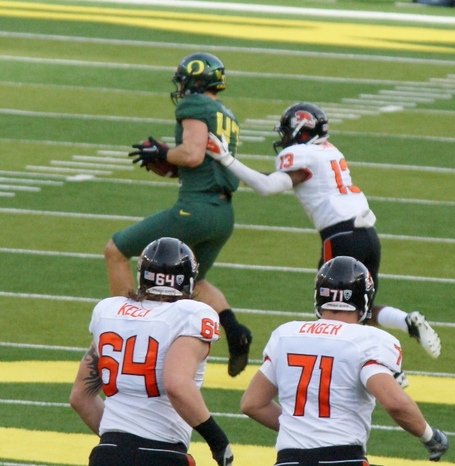 Hekker redeemed himself with a 52 yard punt that pinned Oregon at their own 3 yard line.

The Ducks were beginning to solve the Beaver defense, as De'Anthony Thomas broke off runs for 35 and 19 yards, and Oregon drove to the Oregon St. 33 yard line. But consecutive incompletions handed the ball back to the Beavers on downs again. 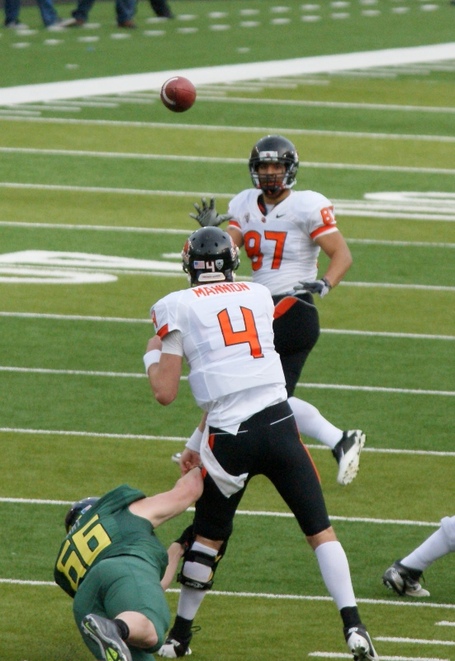 Mannion finally got around to finding TE Joe Halahuni for a 14 yard completion, above, on the last play of the first quarter, but another sack and a completion for 0 yards on 3rd down and 8 required yet another punt. Hekkar again pinned Oregon deep, this time at their 4 yard line, and 3 consecutive James runs couldn't gain a first down, forcing a Duck punt.

Two plays later, Oregon St. finally quit squandering the efforts of their defense, as Mannion found Jovan Stevenson alone in the left flat, and Stevenson, below, sprinted and cut 58 yards for the game tieing touchdown. 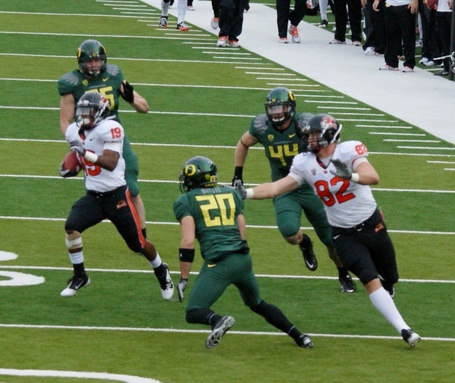 After that, it was all Oregon. The Ducks figured out that safety Lance Mitchell, who has struggled all season with the affects of groin surgery, couldn't move laterally on crossing routes. Reserve safety Ryan Murphy was no match for the speed of Oregon's tight ends and backs. And linebacker Michael Doctor was no match for anyone the Ducks were able to isolate on him. 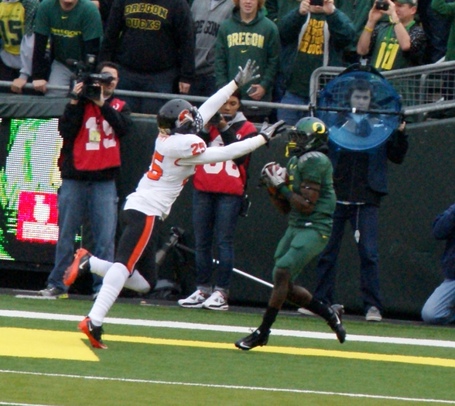 De'Anthony Thomas catches a touchdown pass beyond the reach of Ryan Murphy.

The absence of speedy and experienced linebacker Reuben Robinson, out for a second week with effects of a concussion, proved impossible for the thin Oregon St. linebacking group to overcome.

And once Oregon made offensive adjustments based on what they discovered, Oregon St. never made effective counter-adjustments. 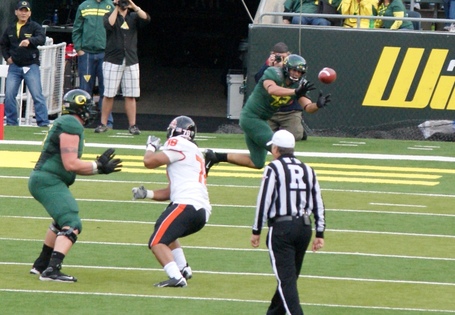 David Paulson, above, De. Thomas, and Barner all beat the out-manned and out coached Oregon St. linebacker and safety groups for easy touchdown catches, and Oregon took a 28-7 lead to the locker room at half time. 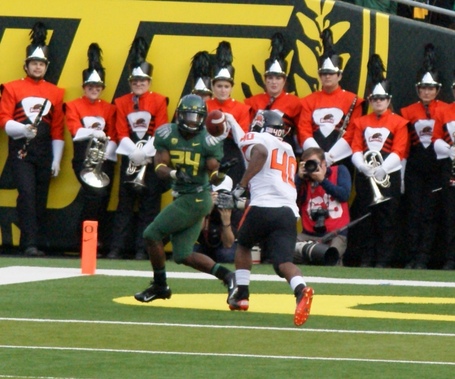 Paulson finished with 8 catches for 105 yards, and De. Thomas had 10 receptions for 86 yards, and both had touchdowns.

With James watching, Da. Thomas sliced up the Oregon St. defense on the first drive of the third quarter, again utilizing Barner, Paulson, and De. Thomas, to expand the lead to 35-7.

James returned on the next Oregon drive, but after a half dozen rushes, one for 19 yards, had to leave the game after suffering a left elbow injury. It was to the opposite elbow from the one he sprained in the Ducks' win over Arizona St. James didn't return, and finished as the game's leading rusher, with 142 yards and a touchdown on 24 carries, in just 2 ½ quarters. 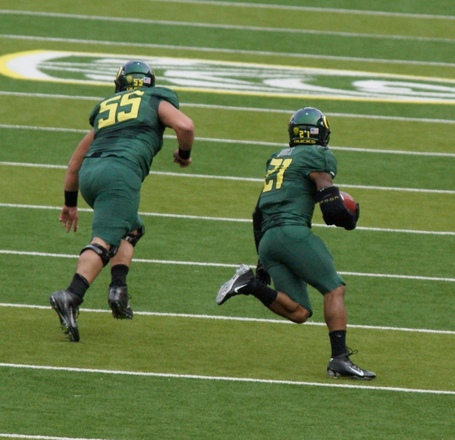 Oregon's LaMichael James found a lot of open space, and was the game's

leading rusher despite playing only 2 1/2 quarters.

Fortunately for Oregon, the injury appeared to be minor, and James said after the game that he could have returned if necessary.

With Barner and De. Thomas on their way to a combined 135 yards rushing and 119 yards receiving, and Ayele Forde yet to come off the bench for 56 yards and another touchdown, it wasn't.

Barner was stopped later on the drive, fumbling at the 2 yard line on a 4th down run that would have turned the ball over to the Beavers anyway had he not lost it, but a pair of sacks of the immobile Mannion, whose' only response to Oregon pressure was to duck, prevented Oregon St. from capitalizing on the fourth fourth down stop of the day by the defense.

In 45 years around and covering both high school and college football, nearly 800 games, I can't ever recall a team making FOUR fourth down stops and STILL allowing SEVEN touchdowns, or losing by FOUR touchdowns! 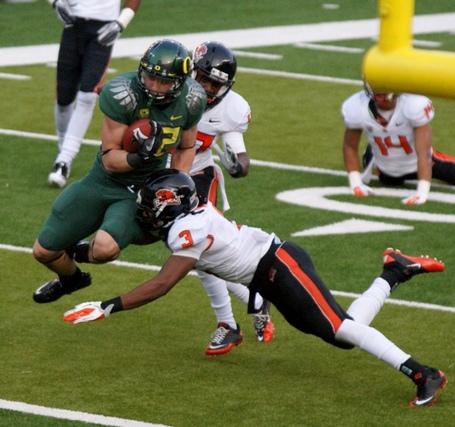 Da. Thomas put the nail in the coffin with a 39 yard touchdown pass to Colt Lyerla, above, who broke multiple tackles in romping through the Oregon St. secondary, which pushed Oregon's advantage to 42-7. 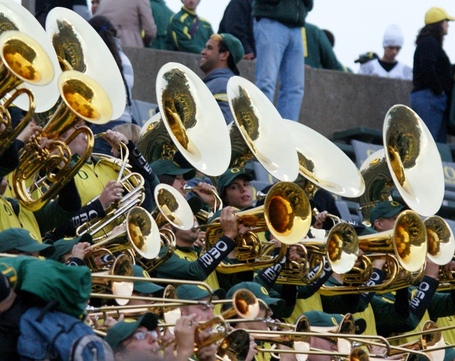 Oregon St. did manage a couple of inconsequential late touchdowns, after Oregon coach Chip Kelly emptied his bench. Mannion found Kevin Cummings for a 19 yard touchdown, and Brandin Cooks for another from 23 yards out, and finished with 27 completions out of 44 attempts, for 299 yards, and 3 scores. But 13 of those 27 completions, and 150 yards, essentially half of his production, came after Oregon had a 42-7 lead, and their starting defense was dancing to the tunes the Oregon Marching Band, above, was already playing in celebration of the win. And over a third of his production while Oregon was still contesting things came on the one short swing pass to Stevenson, who made all the yards on the run.

Mannion also handed over a fumble on one of his half dozen sacks. Despite struggling mightily all day, Oregon State coach Mike Riley refused to give Ryan Katz a try, in his last game in an Oregon St. uniform before transferring, or to attempt to get anything going with Cody Vaz.

Oregon destroyed Oregon St. defensive coordinator Mark Banker's thoroughly unprepared and overmatched defense to the tune of 670 yards, 365 rushing, and 305 by Da. Thomas' passes. Da. Thomas, below, completed 27 of 40 passes, for 4 touchdowns, and no interceptions. 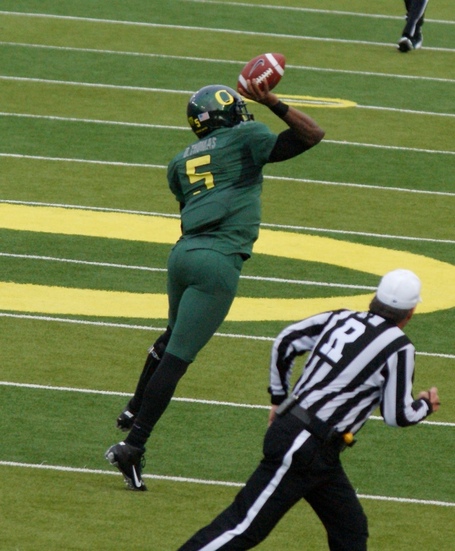 With Mannion's 41 yards on sacks subtracted, Oregon St. managed only 16 net rushing yards. Terron Ward led the Beavers, with only 31 yards, on just 6 carries. Malcolm Agnew, the team's leading rusher, was not used for the second week in a row, despite being healthy.

Even the passing game, which wasn't nearly as productive as the numbers might suggest, was severely inept in terms of play calling.

With Rodgers out, and Jordan Bishop as well, Mannion and offensive coordinator Danny Langsdorf managed to look to Halahuni, whom the Oregon secondary had no one who matched up against him physically, only 7 times (two off-target incompletions).

Marcus Wheaton, the Beavers' leading receiver, only had 2 catches, and had more rushing touches.

Oregon St. failed to convert 10 of 13 third downs, and the one fourth down it attempted. Three were due to completions on routes that did not achieve first down yardage, and multiple incompletions would not have yielded a first down had they been caught.

The Oregon offense, which typically has a considerable disadvantage in time of possession, due to their fast paced offense, managed to hold the ball more than 6 minutes more than Oregon St.

The Ducks ran 37 more plays than the Beavers.

The 9 losses are the worst the team had performed in 15 years.

The Beavers have now lost 18 of their last 26 games. 10 of their last 12 losses have been by double digits, 8 by 3 or more scores. Their other losses were to a FCS team with a losing record, and a UCLA team that in addition to losing that 50-0 embarrassment, have lost 5 games this season by more than 3 touchdowns.

Oregon St.'s only wins this season came against a pair of teams with generally inept defenses and injured quarterbacks, and a team that would proceed to fire their head coach for ineptness.

The Beavers have also now lost 4 consecutive Civil Wars, for the first time since 1994-97, the end of the Jerry Pettibone debacle, and Riley's first year as head coach.

The losses have cost Oregon St. 2 Rose Bowl trips, any bowl game last year, and now, their self respect.

It was the third consecutive year with a significant fall-off, and fourth decline in the last five seasons.

Oregon St. will miss a bowl game, and the associated extra practice time that could really benefit the numerous young players the team has been depending on, for the second year in a row. It's the Beavers' first multiple year absence from the post season since 1998.

Clearly, more than Katz and the seniors should have made their last appearance for Oregon St. today.