Universal Truths Reaffirmed In The Pac

Share All sharing options for: Universal Truths Reaffirmed In The Pac

Most Oregonians were most interested in either Oregon's easy but potentially costly 43-15 blowout win over California Thursday night, or Oregon St.'s 37-27 losing streak breaking win over Arizona Saturday, both of which reaffirmed long understood Pac-12 truths. But there were some other games in the conference Saturday as well, and  while they provided surprises as did the Ducks and Beavers' games, the overall message taken away from those games was not anything new.

Utah once again demonstrated that they are capable of giving FBS automatic qualifying conference opposition a challenge, but they also reaffirmed the widely held preseason notion that they lack the depth to follow thru on their efforts. They also proved as they have several times this year that turnovers tend to negate everything else.

The Utes led early, and again early in the second half, but Arizona St. ran off 25 unanswered points, 18 of them in about a 4 minute span, to pull away for a 35-14 win, and command of the Pac-12 South Division, pending what happens with the UCLA quarterbacking injury situation.

"The wheels came off," Utah coach Kyle Whittingham said. "We'll start winning games when we stop turning the ball over. That's the bottom line. Until that happens it's going to be a long road."

Jon Hays, filling in for the injured Jordan Wynn, completed 18 of 30 passes, for 199 yards, and a touchdown, and John White IV was the game's leading rusher, with 85 yards on 17 carries, including a 30 yard touchdown run. But Hays also threw 3 interceptions, to go along with a pair of Utah fumbles.

Meanwhile, the Sun Devils' Brock Osweiler threw 3 touchdown passes, and as importantly, no interceptions, as he completed 25 of 41 passes, for 325 yards, as Arizona St. played turnover free ball. It was also Osweiler's first win as a starting quarterback outside the state of Arizona. 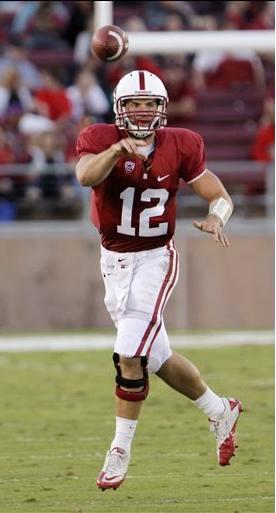 Colorado became the latest team to learn that they do not want to see Andrew Luck throwing the ball. Luck completed 26 of 33 passes (79%), and though he did throw his second interception of the season, a ball that deflected off Cardinal receiver Chris Owoso's hands, Luck also threw for 3 more touchdowns, giving him 14 for the year, and 370 yards, as Stanford (5-0, 3-0)  routed the Buffs 48-7.

Stanford was so balanced that none of the 11 players with a catch had more than 4, though 4 players had that many. And 8 Stanford players ran the ball.

Colorado (1-5, 0-2), like Utah (2-3, 0-3), needs the benefit of expanded recruiting up and down the west coast that Pac-12 membership brings before they will be ready for the upper echelon of the conference. 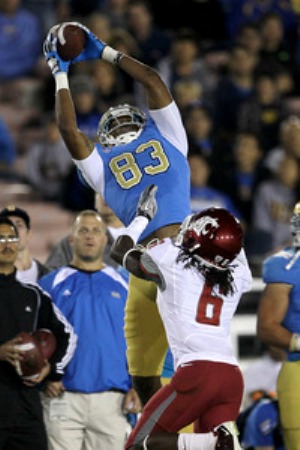 The evening ended with reminders of another couple of Pac-12 truths. One, that a 6'5" target like the Bruins Nelson Rosario, above, who only had 3 catches, but had 120 yards as a result, including the 58 yarder that set up the winning touchdown with 3 and a half minutes left in UCLA's 28-25 come-back win over Washington St., is a real problem for an opponent, no mater how well you have handled him most of the game.

The other reminder was that the Cougs can always Coug it.

Despite UCLA losing Richard Brehaut as a result of a broken bone in his leg, which forced the seemingly perpetually injured Kevin Prince back into the game, the Cougars, who held the ball almost a full quarter of the game more than the run-oriented Bruins, had almost twice as many first downs, and converted as many third downs as the Bruins even were able to get, still found a way to "Coug it" in one of their best ever opportunities to get a win in Los Angeles, blowing 4 different leads.

As a result, Washington St. (3-2, 1-1) fell out of first place in the Pac-12 North race, and will have to decide if Jeff Tuel is ready to return to the starting quarterback job next week when Stanford comes calling in the Palouse. Marshall Lobbestael completed 28 of 40 passes (70 %), but the "lobster" threw for only 235 yards, less than half of what Prince produced per completion.

UCLA (3-3, 2-1) continued coach Rick Neuheisel's job saving pattern of winning every other week, and since they don't play next week, they might even find themselves with a winning record after a Thursday night game at Arizona (1-5, 0-4). Especially of the 'Cats continue to demonstrate that if your defensive front can't stop the run or pressure the passer, you can lose 10 straight against FBS competition.

Arizona St. (5-1, 3-0) will see their chances of a win at Autzen in their next game improve if Oregon's La Michael James can't play as a result of his dislocated elbow. But Oregon (4-1, 2-0) reminded everyone after they reminded everyone of just how good James is that they are still seriously fast even without him. And that while the sturdy Golden Bears have a pretty good defense, California (3-2, 0-2) isn't going to contend as long as their passing is as consistently inaccurate as Zach Maynard was Thursday night.