Unga Out Of Action Again This Week

Share All sharing options for: Unga Out Of Action Again This Week

Oregon St. will be without middle linebacker Kevin "Feti" Unga again this week when the Beavers face Utah. Unga suffered ligament damage to his knee in the first series of the first game this year against a team from Utah. In addition to the rest of that game against BYU, Unga missed last weekend's Washington St. game, and was ruled out after practice today for Saturday against the Utes.

The doctors say Unga's injury won't require surgery, but it will take some time to heal (ligament tissue being much less served by circulation than muscle).

Against BYU, Unga's backup Tony Wilson, who started a number of games last season, also got knocked out of the game, and so did usual strong side linebacker Cameron Collins, who stepped into the middle. The result was 282 Blue Cougar rushing yards, and 2 touchdowns, a substantial factor in BYU's 38-28 win.

In Seattle, Wilson returned, and played ok when he was on the field. Against the Wazzu Cougs, Oregon St. extensively used a nickel defense, with no middle linebacker. As seen in the accompanying photo, they even got caught in the nickel in obvious rushing situations a couple of times.

There were several valid reasons to do this, most notably the fact that Washington St. relies heavily on the pass, and is a negligible threat running the ball. Even short handed at linebacker, and playing pass protection primarily, the Cougars only rushed for 83 yards.

The strategy was also in an attempt to get dinged up safety Lance Mitchell involved in the defense as much as possible without subjecting him to as much contact as his usual assignment would. It also limited wear and tear on Wilson, whose backup, Reuben Robinson, was already starting in place of Collins.

The move wasn't without risk, but with only 4 healthy linebackers available, against a pass-oriented opponent, it was a worthwhile gamble, and it worked out well.

Against Utah, a run first team even before they lost quarterback Jordan Wynn for the season, with Jon Hays working in his stead, the strategy becomes much more problematic, especially if Collins is again unavailable, or even if he plays, but is limited.

John White IV is Utah's best weapon, and in their 3 wins this season, he has run for well over 100 yards in each game. Fortunately for the battered Beaver defense, which also lost line gap filling DT Castro Masaniai for the season in the bruising BYU game, White IV is not a power runner. At 5'8", and 185 lbs., White IV makes his living, and his yards, cutting and running in the open, not driving linebackers over backward after contact.

But if the hole in the middle is big enough (look again at the room Ricky Galvin had), White IV could well meet Oregon St. safety Anthony Watkins before encountering any other Beaver on some runs.

Backfield In Best Shape Of Season

While the Oregon St. linebacking corp is dangerously thin, the news is much better in the backfield. Jordan Jenkins and Jovan Stevenson were both practicing today, as were Malcolm Agnew and Terron Ward. It's the first time since Agnew suffered a pulled hamstring in the first practice after the opening game that all 4 of these tailbacks have been this healthy at the same time.

So long as the offensive line doesn't suffer more injuries, Oregon St. should be able to generate the balance that will make quarterback Sean Mannion's prolific throws most effective.

That's a bit of a tall order, given that center Grant Johnson's ankle is bothering him (though head coach Mike Riley believes, or at least hopes, that Johnson will be ready to go Saturday), and guard Josh Andrews, who made the trip to Seattle, but didn't play, still isn't working with the starters.

Oregon St.'s prospects for a win at Rice-Eccles are good, but only as long as the injury/illness bug stays away. 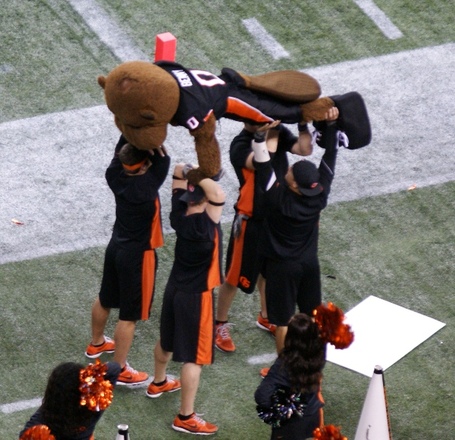 Benny is willing and ready to step in if necessary, but everyone, Benny included, would prefer it if he can continue to focus on his post-touchdown pushups!