Pac-12, The Conference Of Blowouts This Week

Share All sharing options for: Pac-12, The Conference Of Blowouts This Week

The Pac-12 television numbers probably plummeted as games wore on this week, as there weren't any games that were competitive in the late going. USC was the only winner that had their opponent come close late, and the Trojans still beat Norte Dame by 2 touchdowns in South Bend.

The Huskies Chris Polk twice pulled Washington within 3 points, at 10-7 and 17-14 with touchdown runs of 46 and 61 yards, which accounted for 105 of his 144 rushing yards. But Stepfan Taylor ran for 138 yards, including a 70 yard score, Tyler Gaffney piled up 117 yards, and another touchdown, and Anthony Wilkerson romped for 93 more yards, and 2 more touchdowns, as the Cardinal line destroyed the Husky defense almost at will.

Andrew Luck only threw 21 times, but he didn't need to do any more, since he completed 16 of them, including 2 for touchdowns, and 169 more yards. The 615 total yards the Cardinal piled up easily rendered Keith Price's 247 yard passing performance irrelevant.

The win extended Stanford's nation leading winning streak to 15 games, and the rout was the Cardinal's 10th. consecutive win by at least 27 points, a feat not accomplished since the beginning of the "bowl era" in the 1930's.

Arizona (2-5, 1-4) got the ball rolling right away, bolting to a 42-7 halftime lead over UCLA (3-4, 2-2) Thursday night, and after the imposter official incident and a bench-clearing brawl, cruised to a 48-12 win that gave interim coach Tim Kish a win in his first ever head coaching effort.

Nick Foles completed 26 of 39 passes for 291 yards, and 3 touchdowns to Juron Criner. Criner had 10 catches for 101 yards, and Gino Crump had 9 grabs for 103 more yards. Keola Antolin, below (AP photo by John Miller), led a balanced Wildcat rushing effort with 77 of the 254 yards that the ‘Cats rolled up. Arizona got 3 touchdowns on the ground to go with Foles' air show, 2 from Taimi Tutogi. 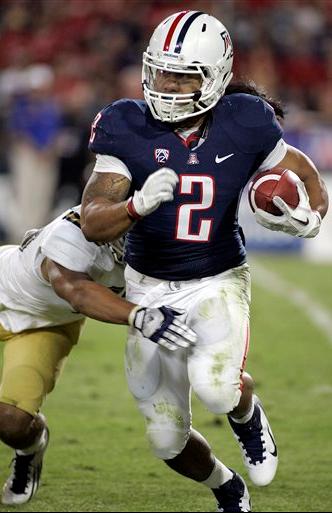 Kevin Prince threw for 286 yards, but completed fewer than half his throws, and got no rushing support, as the Bruins ran for only 37 yards. Meanwhile, the ‘Cats piled up 573 yards, 416 of which came in the first half.

Oregon (6-1, 4-0) kept the ball rolling with a 45-2 blowout of Colorado (1-7, 0-5) in Boulder. The Ducks were playing without quarterback Darron Thomas and running back La Michael James, so Bryan Bennett, below (AP Photo by Jack Dempsey), threw for 2 touchdowns, and Kenjon Barner ran for 2, one for 84 yards. In the first quarter. 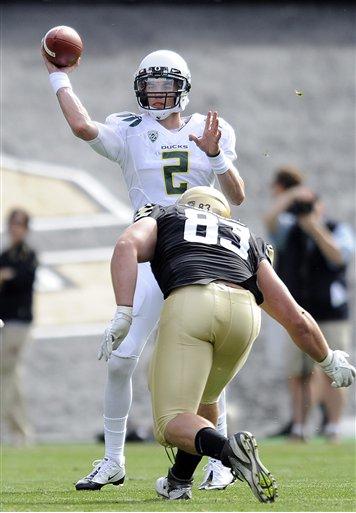 The Buffs were down 29-0 more than a minute before the end of the first quarter, and never threatened. Barner ran for 115 of the 371 yards Oregon ran up, and the Ducks produced 527 total yards, to go along with a defensive touchdown on Michael Clay's pick 6.Colorado only managed 231 total yards despite having the ball almost a full quarter more than Oregon. 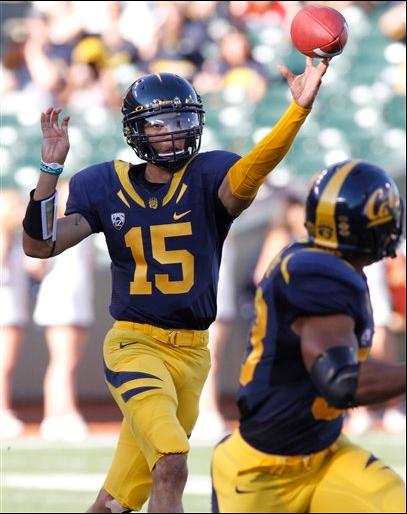 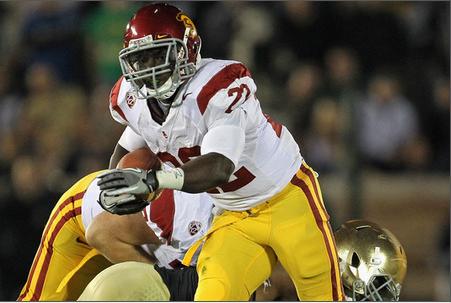 However, the combination of 3 turnovers, which contributed a USC defensive touchdown, after the Irish had reached the USC 1 yard line, and to the Trojans holding the ball 19 seconds shy of twice as much time as Notre Dame did, also due in part to USC rushing the ball for 219 yards, 118 by Curtis McNeil (above, Getty Images photo), vs. the 41 yards the USC defense yielded on the ground, were too much for Notre Dame to make it competitive. 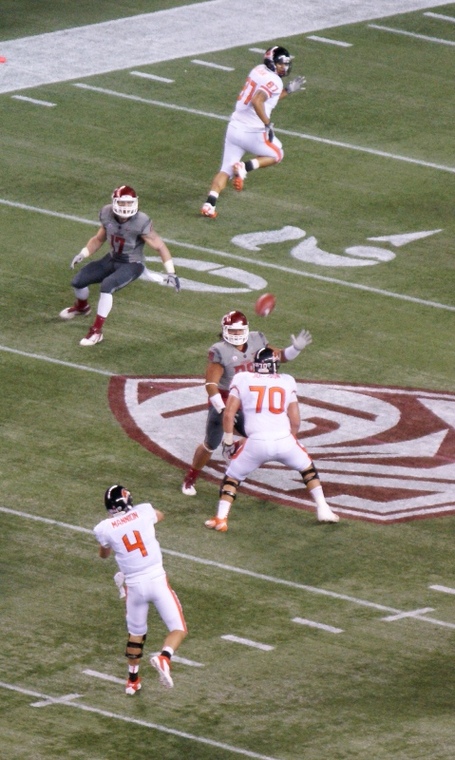 Malcolm Agnew chipped in with another 103 yards on the ground, and a touchdown, while the Beaver defense limited the Cougars to 83 yards rushing, knocked Washington St. quarterback Jeff Tuel out of the game by halftime, and took the ball away from the Cougs 3 times. The Beavers only let the Cougars play with the ball 9 minutes less than they did.

It was the second win for the Beavers in 3 weeks, while the Cougars have now lost 4 of 5.