Saturday A Highlight Reel Day In the Pac-12

Share All sharing options for: Saturday A Highlight Reel Day In the Pac-12

Saturday was a highlight reel kind of day in the Pac-12, and even without the conference's video game team, the Oregon Ducks, in action. Only the day's first 2 games came down to the last minute or so, but all 5 games featured spectacular plays, or spectacular numbers, in some fashion. You couldn't watch all of it, but many Pac-12 fans did watch 3 consecutive games, and keep tabs on the other two as well.

Marshall Lobbestael threw 2 touchdown passes in a minute and a half, including the 63 yard game winner to Marquess Wilson with just over a minute left in the game, as the Cougars spoiled the Buffs' Pac-12 debut.

Rodney Stewart rolled up 275 total yards, including 132 rushing yards, and a touchdown, and it looked like it might be enough to make it a truly historic day for Colorado. But then "the lobster" struck, first finding Isiah Barton for a 19 yard touchdown that made it a one possession game.

Washington St. had saved their time outs, and used them on defense, to get the ball back. And then Lobbestael finally solved the patchwork Colorado secondary, driving the Cougars 90 yards for the win, capped by finding the streaking Wilson in the open, where no one but Butch the Cougar could get to him. Which he did, for a celebratory hug in the end zone with Wilson as the Cougar fans on hand went wild.

Lobbestael, who continues to fill in admirably for the injured Jeff Tuel, completed 32 of 49 passes, and 376 yards, plus 3 touchdowns. 173 of the yards, as well as 2 of the 3 scores, came in 4 minutes after Colorado had taken a 27-17 lead on Stewart's 1 yard touchdown run.

Wilson had 6 catches for 121 yards, and the game winner, and Jared Karstetter added 105 yards on 9 catches.

The air show started much earlier in the LA Coliseum, as USC quarterback Matt Barkley hit Robert Woods, below (LA Times photo) for a 92 yard touchdown on the Trojan's first possession of the game. By the time Barkley was done, he had completed 32 of 39 passes, for 4 touchdowns, and 468 yards, which erased Carson Palmer's USC record of 448 yards thru the air. Woods had 14 of the catches, for 255 yards, and 2 touchdowns. 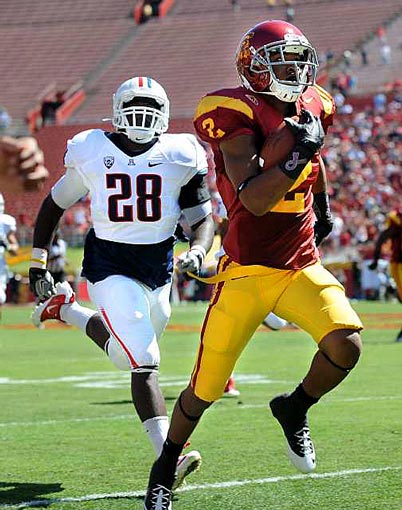 But despite seeing his Wildcats (1-4, 0-3) fall behind the Trojans (4-1, 2-1) 17-0 in the first quarter, in part because he threw his first two interceptions of the season, Arizona quarterback Nick Foles never gave up. Foles led the ‘Cats on touchdown scoring drives on 5 consecutive possessions at one point, and completed 41 of 53 passes, to a dozen different receivers, for 425 yards, and 4 touchdowns.

The last one, for 9 yards to Curtis McNeil, came with 1 minute left in the game, and the Trojans only put the game away when TJ McDonald, who had earlier snagged both of the interceptions, recovered the on-side kick.

For the mathematically challenged, the teams combined for 1,182 yards of offense from scrimmage.

It wasn't that spectacular of an air show in Salt Lake City, but there was still plenty of spectacular play, as Washington (4-1, 2-0) spoiled both Homecoming and their first Pac-12 home game by pulling away in the second half for a 31-14 win at Utah (2-2, 0-2).

It looked like a wild one was in order when Jamaal Kearse scooped up Ryan Lacy's fumble on the opening kickoff, and scored to put Washington up 7-0 9 seconds after the start of conference play in the state of Utah. But defense broke out, and it was only 10-7 at halftime, when Washington mounted a 4 and a half minute drive that culminated in an Eric Folk field goal as the first half ended.

Everything changed early in the second half, as the Huskies came out and marched 80 yards to go up 17-7, sparked by Chris Polk's 49 yard run. Polk, below (AP Photo via the Daily Camera) would finish with 189 yards rushing, on 29 carries, and he added another 16 on 3 catches. It was one of two defining differences in the game. 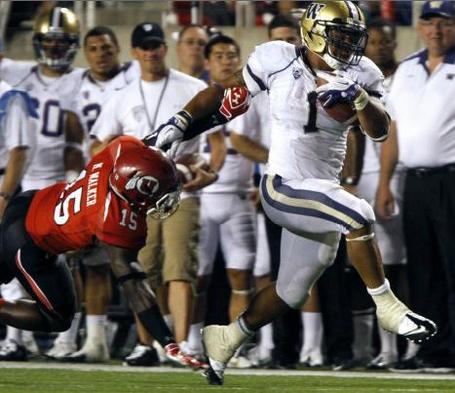 The other actually came at halftime, when Utah coach Kyle Whittingham determined that the Ute's quarterback Jordan Wynn could not continue, due to an injury to his left, non-throwing shoulder. Wynn had completed 12 of 17 passes, for 149 yards and a touchdown, in the first half.

Jon Hays completed 10 of 16 passes, for 156 yards and a score, in relief of Wynn, as Utah rolled up 305 passing yards on the Washington secondary. But the Utes never managed a complimentary running game, and managed only 17 yards on the ground, as the Husky defense continued the improvement that began to show up late in their win over California the week before.

Washington, by contrast, got another good game out of a gimpy Keith Price, who hobbled around well enough to complete 22 of 30 throws, for 226 yards and 3 touchdowns. If Price ever gets even one good knee under him, he's going to be seriously dangerous.

But it was Polk who made the difference. And other than the 49 yard run, not that much of his day really seemed that spectacular, but its because it was being measured by Polk standards, and pretty much what was expected. You know you have arrived when a performance that would qualify as impressive, or even spectacular, by most people is just business as usual. Polk would be in the middle of the Heisman conversation were it not for the exploits of LaMichael James down the road at ninth ranked Oregon, and the numbers Andrew Luck is putting up for sixth ranked Stanford. 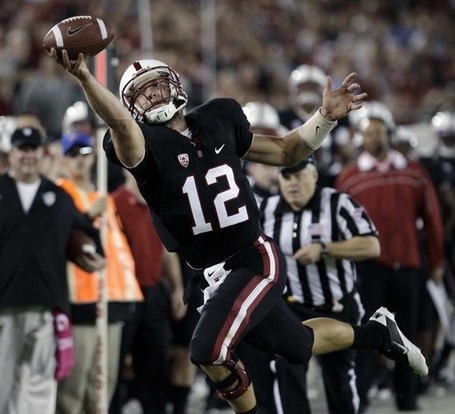 Luck also ran for 11 yards, but Stanford didn't need a lot from him in the rushing game, given that Stepfan Taylor ran for 112 yards, and 2 touchdowns, on 17 carries.

UCLA got 96 yards on the ground from Johnathan Franklin, back after suffering a bruised hip against Oregon St., and Richard Brehaut completed 18 of 33 passes, for 202 yards and 2 touchdowns, and again no interceptions. But Brehaut fumbled, and so did Taylor Embree on a punt return. Both led to touchdowns, mistakes that cost the Bruins any hope of keeping the turnover free Cardinals even in sight. Especially since Stanford held the ball for over 8 ½ more minutes.

But the Sun Devils' Brock Osweiler recovered after throwing a pair of interceptions to the Beavers' Jordan Poyer in the first quarter, and led Arizona St. to consecutive second quarter touchdowns that erased an early 13-0 Oregon St. lead. 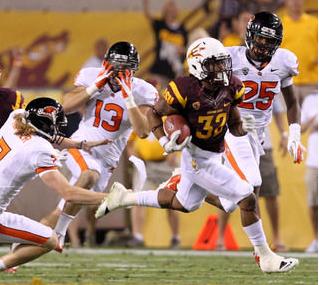 Jamal Miles' 78 yard punt return, above (AZ Republic photo), put the Sun Devils ahead for good, as Arizona St. took a 21-13 lead to the locker room.

Oregon St.'s Sean Mannion found James Rodgers for his first touchdown since he suffered a season ending knee injury making a touchdown catch last year at Arizona to pull Oregon St. within 21-20, but Cameron Marshall scored on runs of 37 and 8 yards, on his way to an 80 yard rushing night, and the Sun Devils pulled away.

The losses by Colorado and Utah, both at home, underscored the conventional wisdom as to why life in the Pac-12 will be a struggle for the newcomers. Bothe the Buffs and Utes have some good players, and are good programs, capable of playing teams tough. But until a recruiting boost arrives, quantity is an issue. Depth is where both programs are really lacking, and as a result, both could play in, but ultimately lose, a lot of hard hitting, competitive football games.

But they aren't the only teams that will be struggling to find wins, as Arizona and Oregon St., who meet next week in Corvallis, are mired in long losing streaks. Arizona has lost their last 9 games against FBS opponents, though 6 have been to teams ranked in the top 14 at the time, and 2 more have been to USC. (When the Trojans qualify as your "breather" games, you have over-scheduled even worse than what Oregon St. has done in recent years.) The Beavers have lost 6 in a row, and 8 of their last 9, with the lone win, ironically, a blowout of USC.

The ‘Cats and Beavs should at least be an entertaining show, though. In addition to Foles' 41 completions on 53 throws, Mannion set Oregon St. records, with 40 completions, and 66 attempts, against Arizona St. Neither team runs the ball well, so Saturday's game in Reser could well see 80 passes completed, and over 110 thrown, for 750 yards.

The "Great Pumpkin" would have a heart attack were he here to see offensive football in the Pac-12!