Showdown At The Stanford Corral Coming

Share All sharing options for: Showdown At The Stanford Corral Coming

Washington's Keith Price and Stanford's Andrew Luck, who right now are the two best gunslingers in the wild Pac-12 west, both led their teams to blowout wins Saturday. All good gunslingers have good sidekicks, and so do Price and Luck, in Chris Polk and Stepfan Taylor. Polk and Taylor both turned in 100 yard games in support of their quarterbacks. And both have pretty good posses riding with them.

Jesse Callier chipped in 81 more yards and a score on 10 carries, as Washington rolled up 295 rushing yards. Jermane Kearse was one of 3 Huskies with at least 5 catches, and a member of a different trio of receivers with touchdown catches.

Meanwhile, the once terrible Washington defense again turned in an improved performance. The Huskies gave up only 207 passing yards, which is almost a night and day difference from earlier in the season, and held the Buffs to only 62 yards on the ground, thanks to multiple sacks. 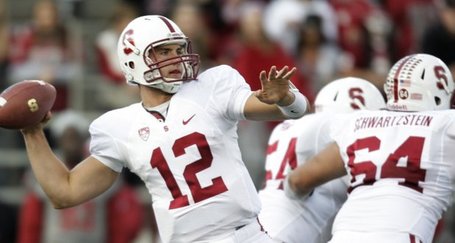 Seventh ranked Stanford (6-0, 4-0) needed almost the entire first period to open a 3-0 lead, and a mid second quarter score only put the Cardinal ahead of Washington St. 10-7 at halftime. Andrew Luck, above (Spokesman Review photo), even threw his third interception of the season.

But after some halftime adjustments, Luck fired four consecutive touchdown passes, including a pair to Levine Toilolo in the third quarter, and Stanford pulled away to a 44-14 win in Pullman. With the win, Stanford became the first Pac-12 team to become bowl eligible this season.

Jeff Tuel, out since suffering a broken collar bone in the season opener, made his return for the Cougars, and completed 17 of 30 passes, for 145 yards. But the inability of Washington St. (3-3, 1-2) to generate a ground game against the Cardinal defense (the Cougars managed only 48 yards on 28 runs) meant it was only a matter of time before Stanford spoiled Homecoming for Wazzu.

Next week, ESPN Gameday will have moved down to Palo Alto from Eugene, and the ABC evening game will originate from Stanford Stadium, when Price and Polk and their posse ride into town for a showdown with Luck and the Cardinal, with at least a share of first place in the Pac-12 North at stake.

It's likely that the winner will still be sharing the top spot in the North with Oregon, who visits struggling Colorado. The ninth ranked Ducks (5-1, 3-0), despite playing without the nation's leading RB in La Michael James, overcame the loss of QB Darron Thomas in the third quarter to a knee sprain, still managed to run away from #18 Arizona St. for a 41-27 win that entertained the Gameday crew, and a National ESPN Audience. 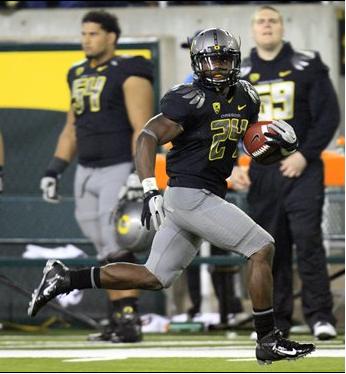 Kenjon Barner, above (AP photo by Don Ryan), ran for 171 yards on 31 carries, added another 106 yards on kick returns, and also 11 receiving, for 288 total yards, which cleaned up nicely for the absence of both James, and down the stretch, Thomas. Any speculation about the condition or return of either James or Thomas will of course be pointless until Oregon's next game time with "Why don't you shut up?" Chip Kelly coaching.

Brock Osweiler threw for 291 yards, and a pair of touchdowns, including 120 yards and one of the scores to Gerell Robinson, and Cameron Marshall ran for 97 yards and a touchdown, on 20 carries, as the Sun Devils held the ball for a half a quarter more than the Ducks.

But opponents' stats don't seem to matter when Oregon is involved. The Ducks simply run or fly away from whatever challenge most teams pose, especially in games played at Autzen Stadium.

The loss dropped Arizona St. (5-2, 3-1) into a tie with USC (5-1, 3-1) for the lead in the Pac-12 south after the Trojans as usual dumped California (3-3, 0-3) 30-9 on Thursday night. The Sun Devils do have both the tie breaker and the fact that USC is ineligible for the Pac-12 Championship game in their favor, as they wait to watch the Cardinal, Huskies, and Ducks sort out who they are likely to play in the title game come December 2. 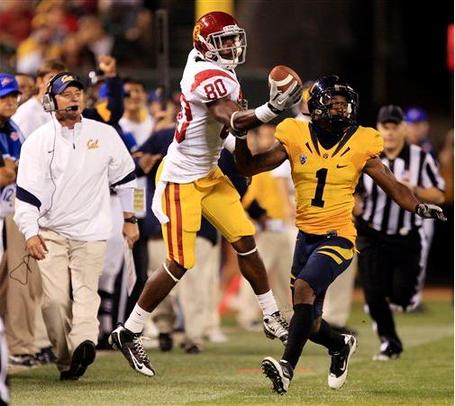 USC capitalized on 5 turnovers, 3 on interceptions thrown by wildly inaccurate California quarterback Zach Maynard to claim their eighth straight win over the not so Golden Bears. Matt Barkley didn't have a particularly good night in San Francisco either, but though the Trojans ran for only 118 yards, and were overall outgained by Cal, the USC defense allowed only 35 rushing yards.

The Golden Bear defense played well enough to give their team a chance, but the rest of their team didn't play well enough for Cal to have any chance. 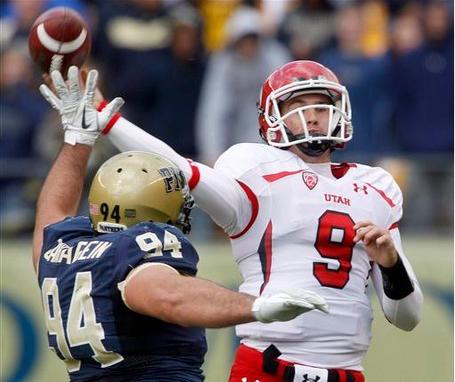 The Utes have struggled against upper tier Pac-12 competition (USC, Washington, and Arizona St.), and fell behind what felt like an early morning wake up in the eastern time zone, but bounced back behind a strong performance by John White IV, who piled up 171 yards on 36 carries, and 4 field goals by Coleman Peterson, quite an accomplishment in the notoriously difficult for kickers Heinz Field.

Jon Hays played an efficient game as Utah continues to adapt to like after Jordan Wynn, who is out for the season for the second year in a row with shoulder injuries. Hayes completed 14 of 23 passes, and though he only threw for 127 yards, he threw a touchdown, and managed a Utah offense that didn't turn the ball over.

But it was the Utah defense, which allowed only 120 total yards, and one score (Pitt's first score came on a 98 yard kickoff return by Buddy Jackson), while forcing 3 turnovers, that carried the day.