The Oregon State men's basketball team held their annual media day on Thursday before practice starts on the 15th.

The point was made clear by head coach Craig Robinson that the main goal for this season is the NCAA Tournament:

"We are setting this program up to be a program that's like everybody else in the country. Our goal is to make the NCAA tournament. That's what we're trying to do. And we know that's putting pressure on us.

We know that not having an NBA season, there are more eyes on us. We would like to help the school in other areas. We want to pick up some of the slack for them and that's pressure. But how we're handling it, we're becoming a more focused team."

"We want to finish in the top-three of the Pac-12, go on and win the Pac-12 Tournament and then advance to the NCAA Tournament. That's what we all want so we will see what happens and see how the cards fold."

As did senior forward Kevin McShane:

"I think like coach said, it's a success if we can make it to the NCAA tournament and see what we can do there. It hasn't been done here for a while and I think for a lot of fans that would be successful. But for the team, from a personal standpoint, we want to keep playing until there's no more playing to be had and to keep going and see how far we can go."

"He is a great player. Coming from Sweden, it is going to be a different change of pace in the game for him but he should fit in real well. He has been doing really well in practice and weights and he really looks like a real Pac-12 player." - Junior guard Jared Cunningham

"Charles has come in and is learning really fast. He is knocking down his shots and he will be coming up with a lot this year." - Freshman forward Eric Moreland

Moreland also said that he can't wait for freshman forward Daniel Gomis to get back out there because he's a "defensive, high-energy player that can block shots and rebound." Gomis broke his leg during the summer and is questionable for the season.

Pretty much every player and coach was asked about the "excitement" for the season. Here are the responses:

"Well you know at the beginning of each season everybody's excited. I think for us though, this is a changing of the guard and we've got previous guys who had lost a lot of games that are now graduated. We have a group of guys who are used to winning a lot of games, used to playing hard and used to being focused. They have shown that focus early on here, in the workouts, in their individual workouts in the spring and over the summer they did a terrific job. There is a lot of excitement just based on the focus of this group." - Craig Robinson

"My take is that this team is unlike any other Beaver team that's been around the last two decades. Yeah, they've had some great success amongst some unsuccessful years but the whole feeling that we have as a team from the players, the coaches, the trainers, people over in the strength room, everything is just different. It's a great feeling and it's a great year to come out and support us." - McShane

"I'm really excited. We have all our guys on the same page. We have all been working hard putting in one day at a time and we are going to be ready for the season." - Cunningham

"I can't wait. It's been a long time and I feel like it's been years. Coming from UTEP and then getting hurt last year, I just want to help the team and I'm ready to get back out there." - Moreland

"I'm excited. Practice starts tomorrow so we are just going to get after it, work hard and we will see how the season unfolds." - Burton

More quotes after the break

Craig Robinson on the changes at both ends of the court:

"I don't think I'm telling tales out of school by saying that we've got the ability now with our athleticism, a little bit more length, to play more man-to-man than we did last year. I'm looking forward to coaching that. On the offensive end, we'd like to speed it up a little bit. Again, because of our athleticism, because of our depth we can try some things that we haven't done in the past."

McShane on the switch to man-to-man:

And another take from Cunningham:

"That's a good focus for us this year. For me, I'm really excited to get to guard a man full court and really show what I can do. This will put more pressure on the ball handlers, forcing them to get the ball out of their hands and it will get our guys guarding full court. We need to cause turnovers and score on the offensive end."

Here is the full transcript from osubeavers.com.

All in all, it was a pretty standard media day. The team is obviously itching to get started and they have a lot of talent, something Beaver fans haven't seen in a while. Practice gets started tomorrow (October 15th) at Legendary Gill Coliseum. 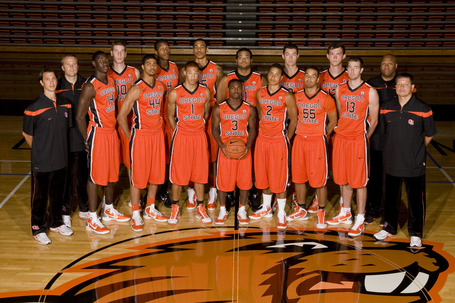