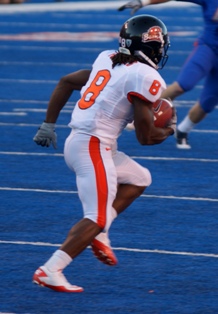 "We always believed that James met the requirements to gain a fifth year," head coach Mike Riley said. "But it is certainly nice to make everything official. James is a special person and a special player. I'm excited to get to work with him for another year."

After suffering a season ending knee injury that required multiple surgeries to repair his ACL and MCL ligaments in his left knee, the second of which is scheduled for tomorrow, the granting of another year to Rodgers, who has not previously used a red-shirt season, was essentially a formality, but when dealing with the NCAA, and eligibility issues, nothing is assured until it is official, and as Riley notes, its nice to have the matter taken care of.

"I'm thankful for this opportunity, and that I have another chance to play at Oregon State," Rodgers said. "I want to thank the fans and everyone for their support."