The Tree Falls Hard On Hokies

Share All sharing options for: The Tree Falls Hard On Hokies

It took until the second half, but then luck ran out for Virginia Tech, and Andrew Luck and the Stanford Cardinal lowered the boom as hard as having a tree fall on the Hokies. Luck threw three touchdown passes to Colby Fleener, and Stanford turned a 13-12 lead at the break into a 40-12 blowout in the Orange Bowl.

The game turned in less than three minutes in the third quarter. Virginia Tech had hung right with Stanford in the first half, despite losing containment on Jeremy Stewart, who made them pay with a 60 yard scoring run. After the extended break, Stanford coach Jim Harbaugh made some adjustments on both side of the ball, and immediately started to turn the tide. The Cardinal defense forced a three and punt, and Luck completed three consecutive passes for three consecutive first downs, driving to the Virginia Tech one yard line.

The Hokies stopped Stepfan Taylor and Owen Marecic for gains of only inches, but Marecic then patiently followed his big red line one more time for a touchdown. The score turned up the pressure on Tech to answer, and Tyrod Taylor found Danny Coale for 42 yards. But Taylor went to the well again, looking for a left side seam route that had worked previously.

Delano Howell read the route, under-cut it, and pulled in the interception at the Stanford 2 yard line. Taylor, Luck, and Fleener went 98 yards in 2 plays, and the rout was on.

Taylor is a good college quarterback, but Luck is a pro. ESPN couldn't go more than a sentence or two without in some way readdressing whether Luck will turn pro with two seasons of eligibility left, and for good reason. Already the projected first pick should he decide to enter the NFL draft, Luck still managed to improve his standing, not just with a masterful dismantling of the normally tough VT defense, but because of how he did it.

Luck, who said he would make a decision in the next couple of days, which is more of a straight answer than Harbaugh would give to questions about when he would decide if he is leaving the Cardinal as well, beat the Hokies in a way that pro teams love, making a variety of medium and long passes, and mixing up a balanced attack.

With former Stanford great quarterbacks Jim Plunkett and John Elway looking on from the sideline, Luck completed 18 of 23 passes, 78%, for 287 yards, and four touchdowns. The numbers would have been better except for a pair of drops. Fleener had 6 catches total, for 173 yards, and half of his catches went for touchdowns.

But the Cardinal also rushed 31 times for 247 yards, 113 by S. Taylor, on 13 carries. Stewart just missed the 100 yard mark, getting 99 more on his 5 carries. S. Taylor is just a sophomore, and while the Pac-12 North almost certainly has seen the last of Harbaugh and Luck, and definitely Marecic and Stewart, S. Taylor will remain a handful for defenses for a while yet.

The variety of plays Stanford threw at Virginia Tech led to the best statement about how the game went, when Luck had found Fleener loose on a post route for the final score. With Fleener running all alone, more than 10 yards beyond anyone, but not yet to the end zone, Hokies linebacker Bruce Taylor, realizing what had happened, threw his mouth-guard at Fleener from behind in frustration.

It wasn't all Luck and the Stanford offense though. The Cardinal defense, led by a pair of sophomores who won't be out of Pac-10 opponents hair next year, ILB Shane Skov and OLB Chase Thomas, repeatedly blitzed Taylor, who suffered 7 sacks on the night. 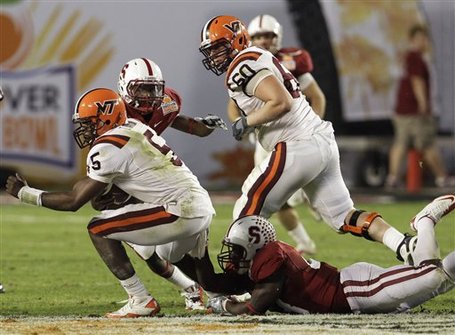 Taylor completed 16 of 31 passes, for 224 yards, and a touchdown, which put Virginia Tech briefly ahead, 9-7 five minutes into the second quarter, and added 22 more rushing yards despite the sacks. But the Hokies mustered only 45 more yards on the ground against the active Cardinal defense.

The impressive win capped a 12-1 season on the farm, the most wins in a year ever for Stanford, concluding the turnaround from a one win season the fifth year seniors, CB Richard Sherman, DE Brian Bulcke, and three starting offensive linemen, Chase Beeler, Andrew Phillips, and Derek Hall, among others, delivered.

Virginia Tech saw their 11 game winning streak, which came after losing to Boise St. on Labor Day, and FCS James Madison 5 days later, and extended thru winning the ACC Championship Game, pounded into the turf in the second half. The loss also means Tech, and coach Fran Beamer, who termed the game one of the three most important in the history of the program, still has only one win over a top five opponent, and none outside Blacksburg.

As was so often seen all season, VT, like almost all teams, was more athletic than the Cardinal, but could not match the execution and ability to make adjustments that Stanford has.

Stanford's shifts confused the Virginia Tech defense, and the Cardinal's blitzes, while not always successful, were frequently enough to disrupt the Hokies' plan of execution. And when Tech dialed up a stunt, Stanford was usually able to recognize it on the fly. The veteran Cardinal offensive line on several occasions was able to get rushing Hokies stacked, providing lanes, be it for a run of pass. And being a step or two off opens all the window of opportunity Luck needs to execute an effective play.

Also, the prospect of losing their head coach, star quarterback, and probably most of their staff, after the best season in modern school history, would have almost certainly distracted any other team. But the Cardinal never missed a beat, turning in a professional performance.

Stanford's win gives the Pac-10 a 2-1 record in the bowl season, with only Oregon's National Championship contest against Auburn next Monday night left for the conference.