Oregon St. rallied from 17 down to take the lead late against Oregon St., only to lose 62-57 when the Bruins scored the game's last 7 points. Coach Craig Robinson said we will be looking at adjusting who play how much, and when, in order to address the problems the Beavers have had of late with slow starts.

"I’ve got to make some changes,’’ Robinson said, "because I can’t get these guys to play for 40 minutes. … I really don’t know (why the horrible start). We looked like we saw the name on the uniform and couldn’t move. We just looked like we were paralyzed.’’

USC rallied from 20 points down against Oregon in the opener of the Matthew Knight arena, climbing back within 4 points, but ultimately couldn't spoil the Duck's upset party, and lost 68-62.

The Trojans were led against Oregon by Nikola Vucevic, who had a 13 rebound, 11 point double double, Maurice Jones, who had 12 points, and Donte Smith, who came of the USC bench to score another 13 points. 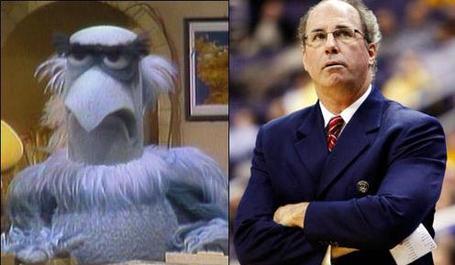 USC Coach Kevin O'Neil (shown above with his twin brother), considers the Oregon St. 1-3-1 defense one of the most troubling ones the Trojans face.

"The 1-3-1 defense produces half court pressure, and we're not good against half court anything, unfortunately,", O'Neil said after last year's loss in Gill Coliseum.

One of Robinson's first major wins at Oregon St. came in his first game against USC, a 62-58 overtime win in Corvallis in 2009, which broke a 7 game Beaver losing streak to the Trojans that stretched from 2005 through 2008.Last year, Oregon St. swept USC, winning 51-45 at Gill Coliseum, and again, 49-44 later in Los Angeles.

We'll have complete coverage afterwords, but those watching on FSNW, and/or listening in to Mike Parker's call, can chime in with your thoughts on the game, or reflect back on the "Orange Express", here.

This poll is closed