Updates From the OR

Share All sharing options for: Updates From the OR 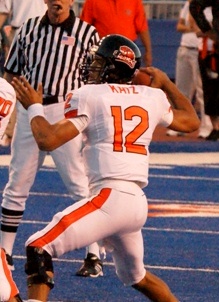 The off-season for a football team usually means one of the prime locations news-wise is the operating room, and this week for Oregon St. is no exception.

Quarterback Ryan Katz hurt his wrist on his throwing hand during the Civil War when he braced himself in a fall. Katz continued without missing a play, but when examined afterwords, rehab was prescribed for over the holiday break.

However, the healing wasn't progressing as fast as expected, and a was re-examination found and a small fracture. Katz underwent minor surgery this week to insert a screw to help the break heal.

"Ryan Katz is going to be fine," Oregon St. coach Mke Riley said. "I'm glad our doctors got to it. They have a good feel in how to fix it."

Riley expects Katz should be ready to go in time for spring practice.

The news isn't quite as comforting about WR/KR James Rodgers, though there's no sense of a major setback, according to Riley.

Rodgers' second surgery, originally planned for last week, won't  be performed until two weeks from now, Riley said Thursday night. The procedure was delayed because the doctor wants James' knee to be more stable. Rodgers has been walking around without crutches since winter term started, using just a brace.

"Everything about the progress is very good so far," Riley said. "But I don't know what the delay means for the long term, if that sets us back, or if waiting now will shorten the recovery time."

Stability from Katz and Rodgers will obviously be essential as Oregon St. searches for the replacement for Jacquizz Rodgers, which Riley says will be an open competition in the spring and summer to find the Beavers' new starting running back. Riley plans to look at all the backs, including the incoming freshmen in August.

"I will open things up all the way," Riley said. "We've had a great string of running backs here. This will be another change of the guard. We are looking for a lot of guys to step forward and play for us. I don't know who that is. We have guys who are good and guys coming in who are good. We'll be good at that position."

Riley's remarks suggest its possible he might move away from a single featured back, which has been his tendency, should more than one candidate emerge.