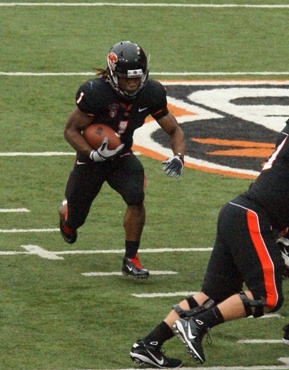 At 2 PM today, Jacquizz Rodgers held a teleconference, to announce his decision to forego his senior season, and declare himself eligibility for the NFL draft.

"I've thought long and hard about this decision," Rodgers said. "I want to thank all of Beaver Nation for their support throughout my time here at Oregon State. My production, the support I've received, and my coaches' preparation put me in position. Without my team, and all of that support, I wouldn't be in this position at all."

'Quizz termed the recent weeks as a matter of collecting more information on where he would project to go in the NFL draft, the pros and cons of turning pro and of staying in school, and the risks involved.

"I've been leaning this way for a while, and I woke up this morning confident about what I'd decided," Rodgers explained. "Money was not the factor," Rodgers added. "This is an opportunity to achieve my lifetime goal."

Rodgers, an ethnic studies major, says he intends to return to Oregon State to finish his degree.

"The main thing I promised my uncle (was getting my degree)," Rodgers said. "I'll probably come back every winter term."

'Quizz discussed the matter with his brother James, who will be returning for his senior year, after receiving a medical hardship year.

"(James said) once you make a decision, go at it 100%. It'll be tough; I've been playing with him forever. I guess we have got to separate. Seeing him get hurt did play a little bit of a role (in the decision)."

"We all at Oregon State wish Quizz the greatest success and look forward to watching his career continue in the NFL," Riley said in a released statement. Riley, who is out of town added "He has certainly impacted both the football team and our lives at Oregon State. He has set a tremendous example as an Oregon State football player."

'Quizz also spoke to whether he will participate in one of the specialized draft preparation camps.

"I haven't decided yet, I need to talk with my family about that."

Being that it is the day Oregon is playing for the National Championship, there were questions about the timing, and where 'Quizz's rooting interests will be tonight.

"It's just a coincidence with the Ducks playing today. I wish my friends on the Ducks well, but as as Oregon Stater, you can't root for the Ducks."