Share All sharing options for: Connor's Thoughts on the Boise State game

The Broncos defeated Oregon State 37-24 on a warm Saturday night in Boise. Here are my thoughts on my trip to Boise, College GameDay, and of course, the actual game.

After five hours of sleep, I got up at 5:00 to go to GameDay. Upon arriving, I see that the line snakes around the stadium, around the corner, and around another corner. So much for being in the front row. After an hour and forty five minutes in line, we finally get to the front. Two of my signs pass inspection, but the Masoliforheistman.com one doesn’t.

I finally round the corner and go through the tunnel to see what I've dreamed about ever since I started watching the show. The heads of Desmond, Corso, Herbstreit, and Fowler on the set, the huge TV screen set up next to the set, and the moshpit of crazy BSU Students. I immediately make my way down to the moshpit, where I am denied entrance because it is too full.

I make my way back up to the stands and stay there for about 15 Minutes before realizing that my signs have absolutely no chance of getting on TV. I decide to go down to the field again, not stopping until I get into the moshpit. I get in, but my Mastercard sign is also confiscated. Still, it's worth it.

I spend the next 2.5 Hours in the center of Boise State students and have the time of my life. I'm not tall enough to get my sign on TV, but I'm having fun anyway. Finally with about 10 Minutes left in the show, one of the cameramen calls me over and puts me in the front row. I have to hold my sign over my head for a while, but it's all worth it as I get a good three seconds of TV time. I tried to flip it over at the last second to reveal my Buildingthedam.com one, but it was too late.

Anyway, it was the most enjoyable five hours of my life. When they come to Corvallis, I highly reccomend attending.

And now, on to the game.

Once again, I thought Katz played much better than the stats revealed. Ryan went 12 for 26 with 159 Yards and 1 Touchdown. But most importnatly, he went another game without an Interception. Considering the talent of the Defenses we have faced this year, that's amazing.

The only things that Katz needs to work on are his short dump off passes and his long balls. He is great from five yards to twenty yards, but he always under-throws on screen passes and over-throws on the long balls.

In his career at Oregon State, I've never seen Jacquizz have a "bad" game. Now I have. It was bound to happen eventually, but I think we can officially take his name off of the Heisman list.

James Rodgers and Markus Wheaton also took carries on the Fly Sweep. James had 16 Yards on three carries, and Markus had 5 Yards on two carries.

The Beavers really spread the ball out, with 7 players making catches. Joe Halahuni led the bunch with three receptions for 56 Yards. He also jumped on a fumble for a Touchdown, but did not do the celebrational Beaver Chomp, much to Beaver Nation's disappointment.

Jordan Bishop, James Rodgers, and Jacquizz Rodgers all had two catches, with Jordan leading the way with 33 Yards. Darrel Catchings, Markus Wheaton, and Aaron Nichols rounded out the bunch with one catch each.

Definitely a step down from the past two weeks, but there were some bright spots. We'll need to see better performances from them in Pac-10 play.

Despite giving up 37 Points, I actually thought the Defense did alright. They did get burned on a couple of trick plays, but so did Oklahoma three years ago, and their program turned out alright.

One bright spot was their play in the 4th Quarter. They made some big stops and held the Broncos to Field Goals, but the Offense just couldn't get it done.

An all around great effort by the Special Teams. You could say they were responsible for 18 of our 24 Points, which is incredible. The only bad thing was Kahut's missed Field Goal, but it turned out to have little effect.

Special Teams will be vital in Pac-10 play, and if they play like they did on Saturday, good things will happen.

I've already talked about the cheap shots in earlier posts, so I won't talk about it here. Dirty play or not, the Broncos are a good Football team. I'm not in favor of having them play for the National Championship no matter what happens in front of them, but they are very talented.

Bronco Nation was amazing, as expected. I find it funny that our Student Section can't pull off a black-out, yet the entire crowd can pull off a Orange-Blue-White-Out. I've got to admit, it looked amazing.

An odd moment occured in the 3rd Quarter when I got cursed out and swung at by an 85 year-old BSU woman. It's a long story, but it might of been one of the oddest/funniest moments of my life.

Washington State-The Cougs took a 50-16 beating against SC. Next up is a trip to UCLA
Oregon-ASU stuck around, but the Ducks were too much to handle in the desert.
Oregon State-The Beavers conclude OOC Play with a 37-14 loss in Boise.
California-The Golden Bears almost shocked the world in Arizona, but fell 10-9.
Stanford-The Cardinal dismantled Notre Dame 38-14. Next up is a showdown at Oregon.
USC-The Trojans set up a big matchup against Washington with a 50-16 win over WSU.
UCLA-The Bruins pulled off the upset of the year with a 34-12 win at Texas.
Arizona-The Wildcats barely escaped UA's upset bid with a 10-9 victory.
Arizona State-The Sun Devils stuck with Oregon for 3 quarters, but UO prevailed 42-31.

Of course I wanted a win, but I thought we showed a lot of character to come back in the second half. A lot of teams would have rolled over and died after Kahut missed the Field Goal to end the 2nd Half, but we didn't. We didn't seemed intimidated by the Blue Turf or the loud crowd either.

Overall, it's time to get ready for Pac-10 play. The Rose Bowl Race starts now.

Who will win this week's showdown in Eugene?

Pictures after the break 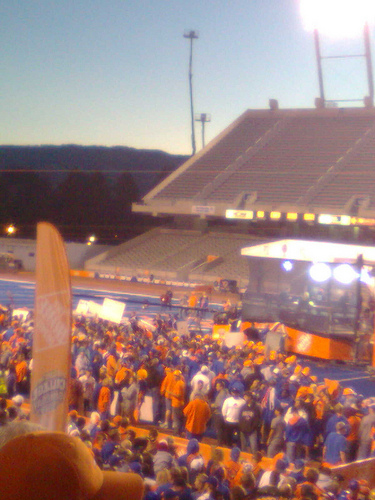 The scene of College GameDay, 10 Minutes before the show began. 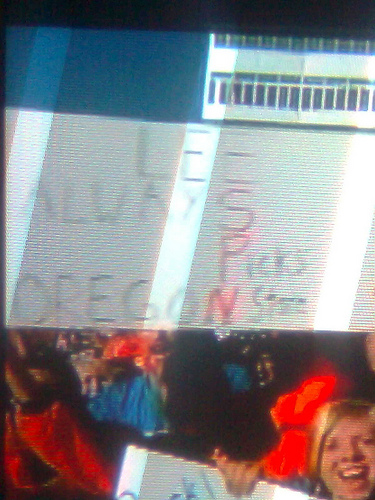 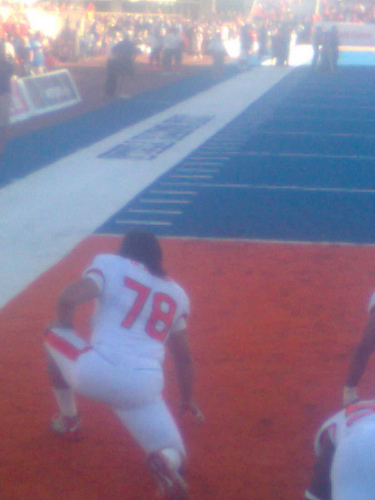 Brennan Olander stretching before the game.