Yet another game, and loss, against a top five team and yet so far away from knowing what this Oregon State football team is made of.  For a team that only had 233 yards on offense and allowed the other team 474 yards I found it amazing that the Beavs could grind it out and actually make this much more a game than it looked at halftime.

The defense still looked porous, but at the same time I thought they looked faster and more aggressive.  In general the defense still did not get enough pressure on the QB and that gave Kellen Moore way too much time to get his passes in there at times on some fairly good coverage. 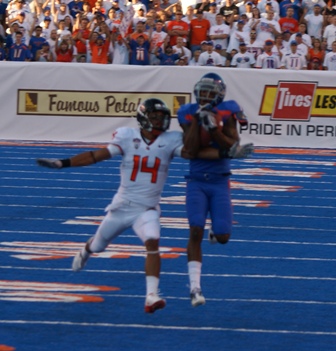 I thought overall the offense really looked about the same as the TCU game, some good flashes from Ryan Katz (some of those runs were key to keeping us in this one) some nice runs by Jacquizz Rodgers, but also a pretty flat overall performance in terms of establishing the run. 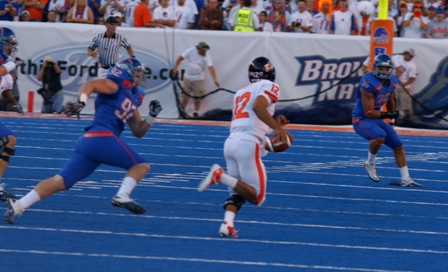 I did think the special teams play was fantastic tonight on the returns, and Jordan Poyer really filled in the gap left out there when James Rodgers left the game, and also on the defensive side (with maybe only a couple breakdowns on the kick off coverage, but some great punt coverage made up for it I thought).

Probably one of the more concerning moments came with a helmet to helmet collision knocking James Rodgers out of the game.  He looked ok at the end of the game there talking with BSU players, but we will have to wait to see how he is doing this week.  And with his incredible punt return for the first Beavs TD we can only hope he is fine and will be ready to go next week against Arizona State. 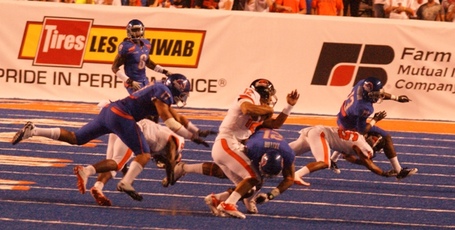 James Rodgers (l.) was knocked out of the game blocking for a scrambling Ryan Katz.

Again, I personally came away from this one with still not having a good idea what Beavers team we have this year.  I was pretty depressed about the whole deal at halftime, then I felt like we might have a chance and wow they are sure taking the BSU blows and hanging with them, to finally a general feeling of I'm not really sure what to make out of this game.   I might be still seeing some silver lining to these first three games, but the team hasn't played all that great and if they can play this flat and still be in these games I wonder about what this team can bring when they start clicking.  I hope that starts soon though!