A few quick bullets to get your Tuesday started:

Blue turf. The big news of Monday was the 440 gallons of blue paint that was sprayed onto the Tommy Prothro practice field. The team will practice on it for the first time later today. I posted a video earlier in the day yesterday, and also snapped the photo below the finished product. The OSU athletic department now has a video up showing the painting process. 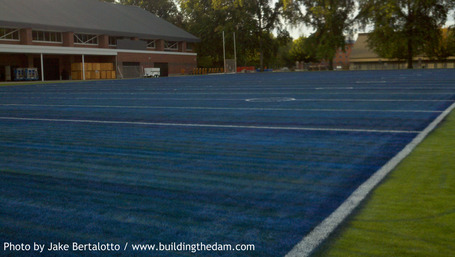 Oregon St. Coach Mike Riley explained the practice schedule, noting that the offense needs to hear noise, while the defense needs to see blue. So the Beavers will start in the stadium, working on special teams, because that's where the turf is, and the kickers need that. Then they will move up to the blue grass for a while, and the defense will stay there, as the offense moves back into Reser, because, as Riley explained, that's the only place they can really practice with noise.

"It's a sign of the significance, the bigness of the game," Riley said of the extent of the special preparation efforts. "But also, its fun!"

The stats aren't pretty. With the team taking yesterday off, stats was about the only other thing worth talking about-- along with the turf. Buker takes the first look--- we'll get more into this later in the week.

Checking in on the polls. In the AP Poll, the Beavers move up a spot to #24, but are still left out of the USA Today poll (#28, if you read the fine print). Boise State sits at #3 in both rankings.

Get your signs ready. ESPN Gameday is getting their plans worked out for Saturday's show. The show will be filmed outside Bronco Stadium on Friday night, then moved inside for the morning show. Gates will open at 5:30am to fans. Rehearsal starts at six, the show hits ESPNU at 7am, and coverage moves to ESPN for two hours starting at 8am.

Bronco fans, behave yourselves. With so much attention focused on Boise State this week, the university and athletic department are reminding fans of the importance of sportsmanship this week. OBNUG chimes in, suggesting that fans use the "Would Coach Pete approve?" rule this weekend.