Football is here. Several games are already in the books today-- but I've only been watching two: Utah/Pitt and USC/Hawaii. Make sure you take advantage of our kickoff open thread, where Connor has been keeping us updated all day.

Will the stadium be half full? Or half empty?  TCU has poor attendance as is, and it seems like playing their season at opener at Cowboys Stadium isn't helping them out. A big reason for this could be the ticket prices... a report out of the Dallas Morning News says the tickets range from $53 - $163. You can get a set of season tickets at TCU's Amon Carter Stadium for $210.

TCU and Oregon State are thinking they'll get 40,000 fans in the 80,000 seat stadium. 4,000 or so are expected to be Beaver fans who made the trip from Oregon, or the drive from Richmond.

Johnny Hekker is poised to assert himself as one of the elite punters in the nation. He's developing the technique to go along with his booming leg. As of last year, he wasn't quite punting the ball with the distance Sam Palescu had several years ago, but I have reason to believe that the numbers will catch up this year. He's not shanking punts like he was back in 2008 anymore, and his footwork is improving. Here's a quick chart I threw together on OSU punting in recent years: 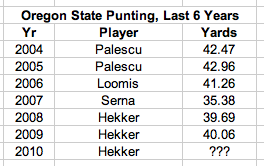 Kahut has developed into a fine kicker himself, but we could be in a world of hurt if he can't overcome his nagging back innury he suffered in a car accident before fall camp began. If Kahut can't go, then true freshman Max Johnson from Astoria gets thrust into the spotlight. Johnson has all the credentials you'd want of a freshman kicker, but he lacks experience at the college level.

Marcus Perry is entering his third season as long snapper. Bruce Reed on Perry: "I ride him pretty hard because I expect every snap to be perfect, and he's capable of doing it."

We'll have James Rodgers returning kicks, with Jordan Poyer waiting in the wings to take over next year. I'm not sure whether Poyer and Rodgers will both be deep on kickoffs yet, or if we'll see Kevan Walker, as the depth chart indicates. It seems that the coaching staff is looking to use Poyer exclusively as a punt returner.

Get Your Oregon State - TCU Fix. Building the Dam has been buzzing this week... make sure you catch up on all our material aimed to get you ready for gameday. We have five questions for the week, a look at the matchup, the Oregon State depth chart, as well as a comprehensive look at TCU offensive and defensive personnel. Plus, Andy has quotes from Mike Riley's press conference earlier in the week.

And don't worry, we have lots more TCU coverage coming today and tomorrow!

Football is back. Enjoy it!