Oregon St. Wins A Wet And Wild One

Share All sharing options for: Oregon St. Wins A Wet And Wild One

Oregon St. defeated Louisville 35-28 in a wet and wild home opener that featured a little bit of everything, and wasn't decided until James Dockery's interception with one minute left to go.

Dockery was burned on a similar play on the previous drive, where Louisville WR Josh Bellamy drew a pass interference penalty on Dockery, and still managed to pull in a 25 yard completion. But when Cardinal quarterback Adam Froman, who had completed 22 of 37 passes against the Beavers, for 288 yards, and a touchdown, dialed up the same play again, with the game on the line, the Beavers' senior captain cornerback said "Fool me once, shame on me. Try me twice..."

"I just took a gamble," Dockery said.." It wasn't the first time I got beat on the fade. Earlier in the game they were throwing at Brandon (Hardin). Brandon communicated to me that it was a back shorter fade, so I went up to play the hands so I didn't give separation. A pivot on an outside move is a little different than a regular fade route. It didn't work out the first two times so I said if they come at me again I got to look back and take a chance."

Louisville jumped out on the Beavers early, something not often seen of late, as Oregon St. has established a pattern under Coach Mike Riley of getting off to good starts early in games. A goal line stand and another stop, on a spectacular strip by Suaesi Tuimaunei that caused Froman to lose the ball just as he appeared to be scoring, kept the Beavers from being buried before they ever got in gear. 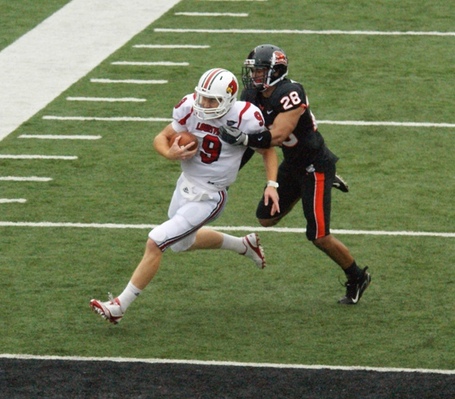 Riley remembered the season opening loss at Stanford two years ago, when what was looking like the game winning touchdown for Oregon St. became a Rose Bowl berth costing turnover. "That was why you never want to give up on a play," Riley said of Tuimaunei's effort. "You don't know what will happen, or how it might matter later." 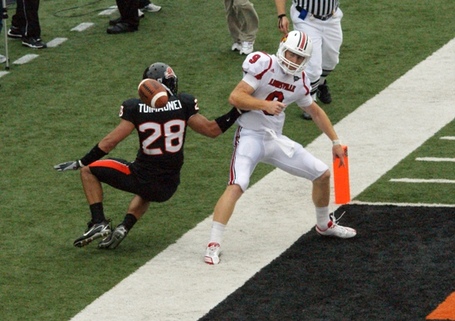 Three hours later, a touchdown saving effort in a then scoreless game turned out to matter as much as anything that happened all day. Count on Riley to tell this story to new players for years to come.

The Beavers withstood the early challenge, and proceeded to score touchdowns on five consecutive possessions, starting with Joe Halahuni's touchdown catch late in the first quarter (complete with a celebration penalty), and ending with Marcus Wheaton's 28 yard fly sweep, on a hand off from Jacquizz Rodgers, out of the Wild Beaver formation. The score put Oregon St. ahead 35-14 five and a half minutes into the third quarter. 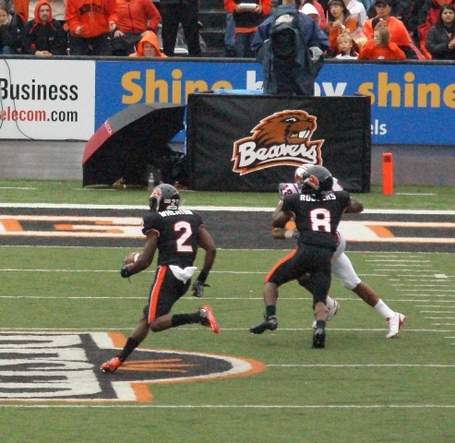 In between, ‘Quizz accounted for three touchdowns of his own, including one as a receiver (below, eluding the grasp of Louisville linebacker Dexter Heyman), as Ryan Katz and Oregon St. Offensive Coordinator Danny Langsdorf opened up the playbook, and had Katz focus on distributing the ball, a lot to the Rodgers brothers, but also to his other weapons. 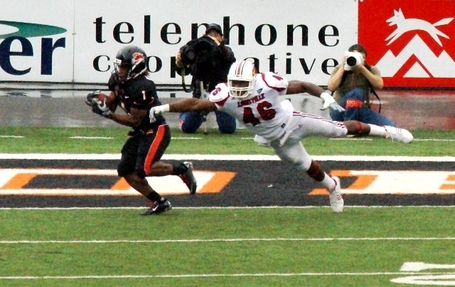 ‘Quizz (below, banging his way through three Cardinal defenders for one of his two rushing touchdowns) finished with 132 yards on 22 carries, and caught five of Katz' 15 completions for another 22 yards. 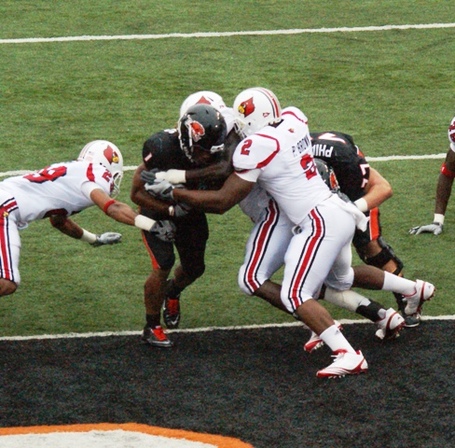 "That's more like it," Riley said of ‘Quizz's role, though he noted "we can do better."

Katz completed passes to five wideouts, in addition to the scoring toss to Halahauni. The most (3) went to James Rodgers, who finished with 243 total yards, combining rushing, receiving, and returning. But the longest was to Darrell Catchings, a 27 yard catch and run on Oregon St.s' first possession of the third quarter. 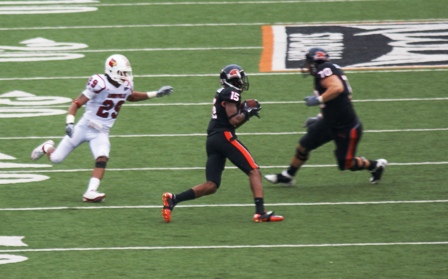 Louisville rallied for two touchdowns, starting with an 11 play drive that overcame the second episode of what was initially ruled a Cardinal touchdown (Tuimaunei's strip of Froman was ruled a touchdown initially) being overruled by replay. And both happened right in front of the Louisville visitors' section. 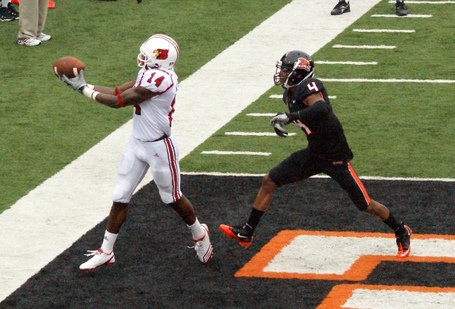 Froman capitalized on an offsides penalty on the Oregon St. defense for a five yard touchdown run, and put together a two throw touchdown drive on the Cardinals' first drive of the fourth quarter to make it a one play game for the last 13 minutes.

Froman, who threw for more than twice as many yards as Katz, found Doug Beaumont for a 44 yard completion, in which Beaumont broke multiple tackles in the OSU secondary, and then hit a leaping Cameron Graham (83, below) for the score. 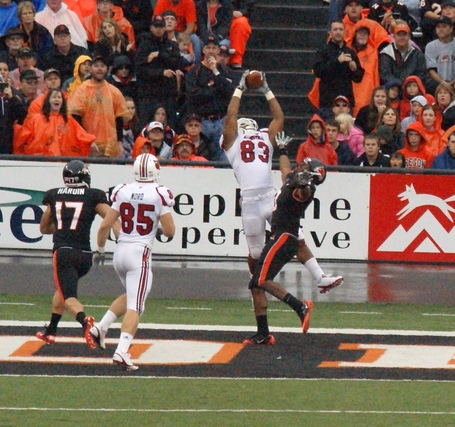 Defensive Adjustments Save The Day 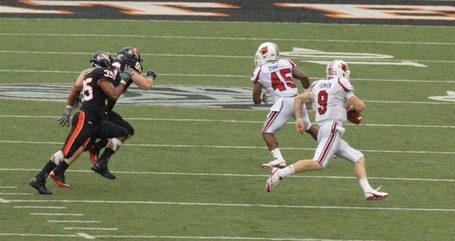 Much of the game had been a chess match, as Louisville surprised Oregon St. with a lot of roll-out action by Froman (9, above), who showed more mobility than anticipated, and significant use of the wildcat formation themselves. Froman's free-wheeling was a planned action, based on the success TCU's Andy Dalton had against Oregon St., and he picked up 46 net rushing yards. That, and direct snaps in the wildcat formation, allowed Bilal Powell (15, below scoring Louisville's second touchdown) to add 83 yards and a score to lead the Cardinal ground game. 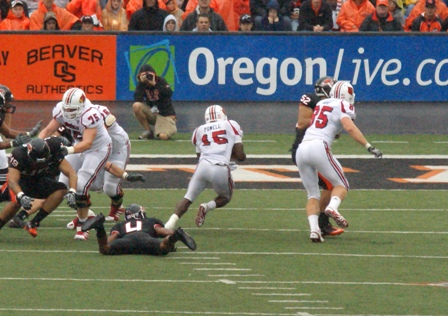 The Beavers were led in tackles by Dwight Roberson, who had 16 tackles, but the Beavers used over 30 players on defense, and had 26 on the tackle chart. And it was Tony Wilson, who emerged late in the game, with a sack and significant disruption.

Louisville's huge offensive front was expected to win the battle against the Oregon St. front seven, and coupled with a lot of short crossing routes that occupied the Beavers' secondary, was effective against the gap cancellation principles of Oregon St. Defensive Coordinator Mark Banker's defense.

Both 'A' gaps, and really, all but the left 'B' gap, are unavailable. But one good block on Taylor Henry (91), and that one gap is wide open for Victor Anderson (20).

Both Froman and Powell were effective at reading where the un-cancelled gap was, as Oregon St. committed early to certain gaps, but didn't have the personnel to fill all of them.

Numerous personnel groups and looks were intended to create uncertainty as to where the un-manned gaps would be on any given play, but the Cardinals were still effective with their reads.

Once Oregon St. switched to more read and pursuit, Louisville was shut down.

Wilson stood out, and though numerous gaps went un-cancelled (as above), the critical one rarely was.

"That was an excellent example of learning as the game went along," Riley noted. 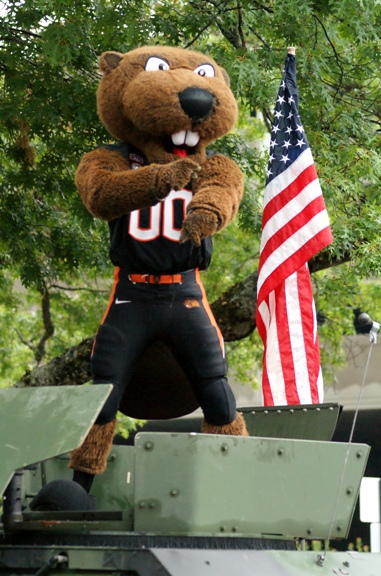 "Benny" was ready for the battle to come. 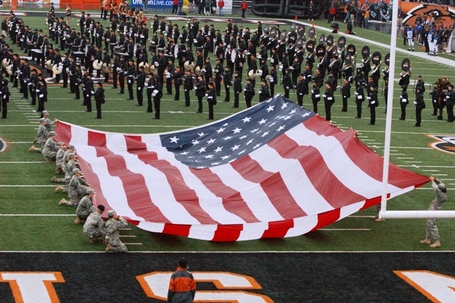 The home opener was Military Day, and featured the debut of the largest marching band in the 120 year history of the "Spirit and Sound of Oregon State." It was also easily the wettest game in several years, and at least that probably won't be repeated next week in Boise, against the Broncos (3-0), who blew Wyoming out 51-6 in Laramie, in their home opener.

The Beaver defense will have to progress a lot more to keep up in Boise, but Riley felt good about the experience.

"I actually think that at the end, it's good to be in games like that, to have Johnny (Hekker) have to punt the ball and us go down and down it, play defense to win the game at the end, it's all invaluable practice. Those experiences should help you the next time it comes up." 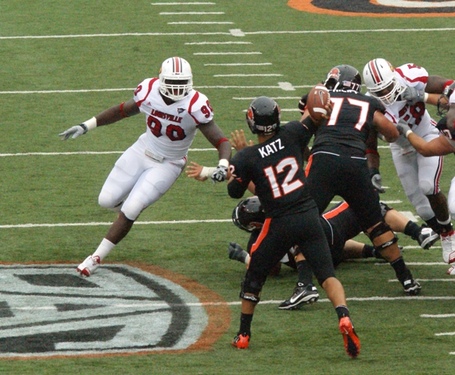 Katz continues to progress, as the better distribution demonstrated, though there were some off-target tosses, particularly low ones, especially early. Katz also just missed on a bomb, overthrowing James Rodgers open behind everyone on a post route.

Katz did have time to throw much of the day, and actually waited too long to take off on occasion. One time when he did, he lowered his shoulder, and drove a Louisville defender back off the tackle. Langsdorf will doubtless advise the Beavers' young quarterback to save that for when the game is on the line (though as things turned out, every possession was important), and lead with something softer than his head.

"I was just trying to score," Katz admitted.

The game did see the beginning of the Cody Vaz era, after Katz took a hard hit trying to hit Halahuni out of his own end zone. Vaz ran two plays, but the drive died when a pass to James Rodgers was a little high.

Katz returned the next series, however, and was fine. "Their guy got me with the helmet on my shoulder pretty good. I had the wind knocked out of me."

James Rodgers, in typically fashion, made up for the mis-handled pass a couple of series later, catching the same high throw as Oregon St. punched the ball out of the shadow of their own goal post, after Louisville downed a punt on the Beavers' one yard line.

That drive stalled as well, but it set up a Hekker punt, as the Beavers forced the Cardinal to start both their final two drives from 90 or more yards away from the Oregon St. goal line.

In the end, though not perfect, the Beavers broke their three game losing streak, and it was a classic example of a full day of college football (complete with post game traffic jam, thanks to Portland St. and Oregon also playing in Eugene). The game drew 45,379, the largest crowd ever at Reser for a non-conference game, eclipsing the 2008 Hawaii game, and the fourth largest ever.

And it was a pretty good, if also pretty wet, day to be a Beaver. 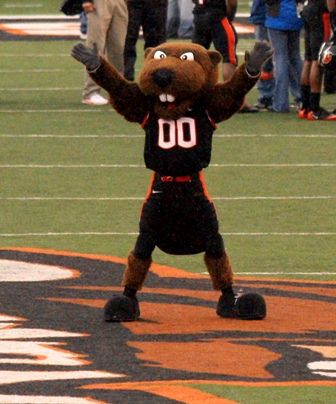