Share All sharing options for: Nike Pro Combat System of Dress to Be Unveiled at 7am Pacific

As announced several weeks ago, Nike is rolling out their brand new uniforms for this season-- the "Pro Combat System of Dress" -- this morning at a press conference in New York City.

Ten of the top college football programs have been selected to wear uniquely designed Nike uniforms for at least one game during the 2010 season the company announced today.

The dates of those games will be announced at the unveiling of the uniforms Sept. 1 in New York, streaming live on Facebook on September 1, 2010, at 7:00 AM Pacific.

UPDATE: Here is a photo from OSU Football's Twitter feed: 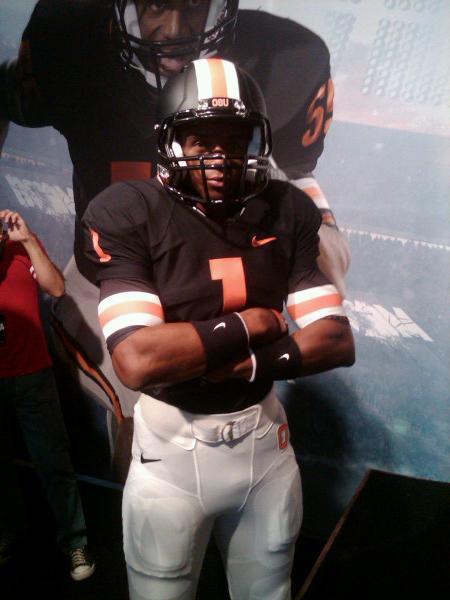 Oregon St. is scheduled to wear their retro-inspired look that harkens back to the 1967 Giant Killers in the Civil War. (Other games may be selected later.)

TCU is scheduled to wear their this weekend for the Oregon St. game.

You can see more of the new uniform at the OSU Photo Gallery.