Ever since Joe Newton's freak injury hours before the start of fall camp in 2005, a practice that can be summed up with the phrase "Business as Usual" is always a good way to start things off.

The players are starting out in helmets with no pads for these first two days-- they'll don shoulder pads for Thursday's 2 p.m. workout.

We'll start our look at news from Monday's practice with this tweet from Mike Riley following practice:

Great 1st day of practice, the guys were flying around and having fun. It was great to be back out on the field! #gobeavsless than a minute ago via web

It's obviously a relief to players and coaches to be back out on the field, but that feeling is sure to wear off soon as the team gets down to business.

While the Beavers aren't going full boar yet and are largely still in "installation" mode, Jacquizz Rodgers commented that the intensity level seemed to taper near the end of the workout. Here's what he told Jim Beseda and the Oregonian:

"I'd say it was an average day. If we would have finished up good, then it would have been a pretty good day offensively, but we started get sluggish at the end, throwing interceptions and fumbling. That will be a topic in our meetings tonight, for sure."

Rodgers also told media that he's not focusing on the hype surrounding a potential Heisman Trophy nomination. However, he did comment that he's done research on past winners, and winning games is a crucial element to becoming a finalist. Quizz knows that the season opener with TCU on ESPN marks a big opportunity.

"You perform on ESPN, everybody's watching and that gets your name out there if you're trying to make it to the next level."

Cliff Kirkpatrick focused on the man many people want to see more of: quarterback Ryan Katz. 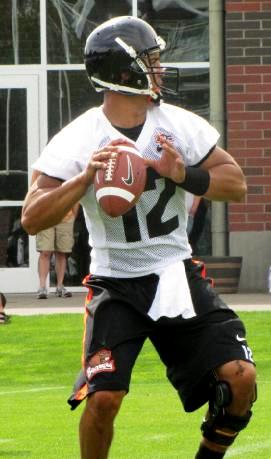 With the offseason departure of Peter Lalich, Katz (r. OSU photo) enters fall camp as the clear No.1 quarterback. With such talented weapons around him on offense, it will be his task to do as much learning as possible in practice in preparation to face two top-ten opponents in the first three weeks of the season.

There's no question that he has the right mental mindset-- he's had that all along. He has the physical tools as well, as Riley has been quick to note every time Ryan enters a conversation.

Tuesday's practice begins at 2 p.m. in Corvallis. If you stop by to check it out, make sure to chime in!
--Jake | (jake.buidingthedam@gmail.com)