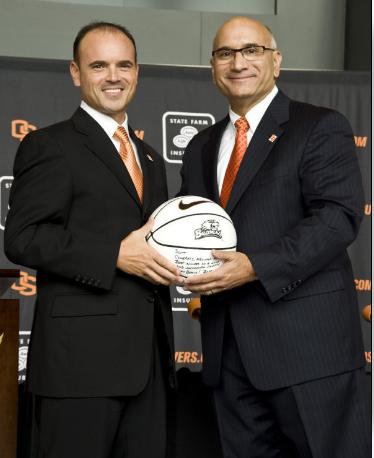 Oregon St. has filled their opening for a women's basketball coach by hiring an alum, and one with a history of national success from a local platform.

Rueck was 283-88 (.763) in 14 seasons as the Bruins coach, and posted a winning record every season, topped by a perfect season and winning the Division III National Championship in the 2008-09 campaign.

George Fox finished the 2009-10 season with a 28-3 overall record, and a perfect 16-0 Northwest Conference mark, their second consecutive perfect season in the Northwest Conference. The last two seasons were only the second and third times in the history of the NWC that a team has gone undefeated in league games.

Rueck is a second generatio0n OSU alum, and began his coaching career at nearby Santiam Christian High School.

"What an honor this is for me," Rueck said. "Being an alum, it's great to have an opportunity like this to come back to a place that means so much to me. I can see many smiling faces that I know already and that's a unique and special thing. This is a place that has meant a lot to me from day one, almost 41 years ago. My mom went here so I am a legacy. I am a Beaver from the beginning. To have the opportunity to come back and represent this place as an institution, in this state, is something that I greatly cherish. I am excited. I am excited to come to work every day and know that I am representing more than just myself and this University but an entire region."

Athletic Director Bob De Carolis was pleased to find a replacement for LaVonda Wagner as successful as Rueck who posted an 85-8 record over the last three seasons. But in light of the controversy about coaching style that in the end caused a mass exodus from the program, and ultimately ended Wagner's stint as coach, it was how Rueck has gone about being successful that made him the right choice for the job.

"What's really important to me is the intangibles. Number one, he is a native Oregonian. He gets it. He's also part of the family. He is a Beaver. He gets that, too. He knows that we relish being the underdog,  but that we're going to outwork you and that's how we're going to beat you. He has proven that. Scott is also well respected in the Northwest. He's built some tremendous relationships. At the end of the day, he is just the perfect fit."

Rueck explained his style at his introduction to Beaver Nation.

"I motive them by making it a great place to be every day. You can't go 32-0 and have that consistency if it's up and down every day. So you need that leadership and that consistency. They need to know what to count on. You have to create and environment where everyone wants to work hard and everybody is motivated. Everyone's focus has to be the same. My philosophy at George Fox is what I'm going to bring here, adapted obviously to the Division I level.

A coach is a mentor. A coach is an example. That's a head coach's Bible. You're setting an example at all times. So, being first class in every way; respecting them as people. I don't think there's any other way. You have to gain their respect. You have to gain their trust. And once you do that, the sky is the limit for your team because then they will do the same and treat each other with that respect. That's the standard my parents raised me with and that's what I believe is right. We proved at Fox that you can win big - not just win - if you create that environment."