Share All sharing options for: Passing Prevalent At Practice

Wednesday evening's Oregon St. football practice was sans hip and thigh pads, which was just fine, as the theme of working on the passing game is the priority this fall, and the primary focus Wednesday night.

With four quarterbacks on the team, but Ryan Katz having no "meaningful" game experience at the college level, and none at all for the others, getting not only Katz, but also Cody Vaz ready (in case anything happens to Katz) remains the focus full time for head coach Mike Riley and offensive coordinator/QB coach Danny Langsdorf.

Having James Rodgers obviously (pictured, above) helps, especially since it quickly becomes evident that James has worked hard on his hand work and footwork in preparation for his senior season, and a shot at the NFL. Rodgers' ability to create separation, often yards of it, quicker than anyone seen in Reser before, could constitute a game-plan changing consideration for opponents.

But Katz's success, as well as the success of James and Jacquizz Rodgers, depends heavily on the ability of others in the receiving corps to make a contribution as well. So it's no surprise, and nothing that constitutes a "leak" to other Pac-10 coaches, that the development of the rest of what could develop into the best overall group of receivers in OSU history is a big part of that priority. 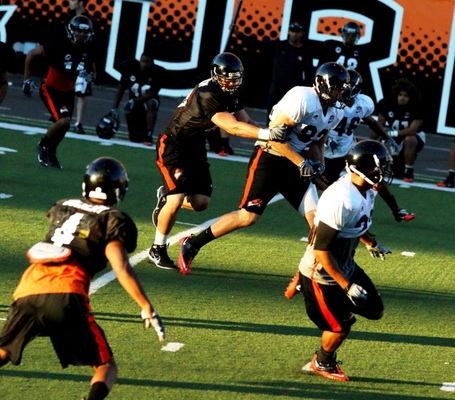 H-back Joe Halahuni is going to give opposing linebackers and safeties headaches (literally) this fall. 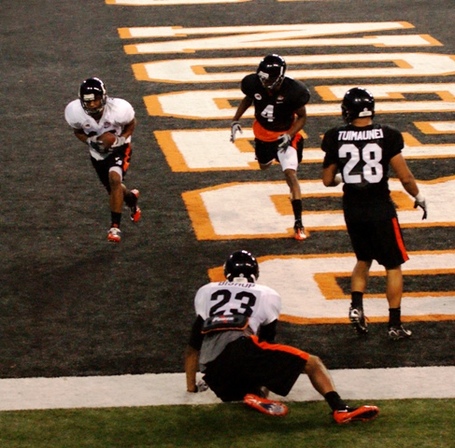 Aaron Nichols (above, catching a touchdown pass) continues to impress as well, making the early retirement of Casey Kjos for health considerations, which had made me personally as nervous as anything that happened since last season, much less of a concern. And Nichols is not a specialist. He runs all the routes, and grabs any ball that is in his zip code. This makes him the leading candidate to be Katz's new best friend. 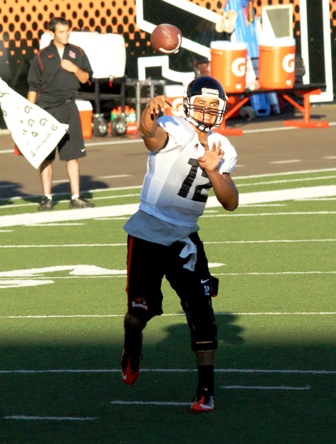 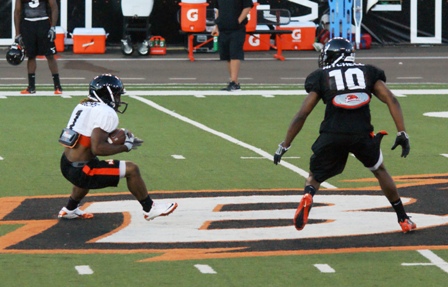 It's also not going to surprise anyone to learn that Riley and Langsdorf are working on ways to leverage Jacquizz Rodgers (above, putting a move on Lance Mitchell) as a receiver, given they already made that addition last year. And the more options Katz is comfortable with, the better. 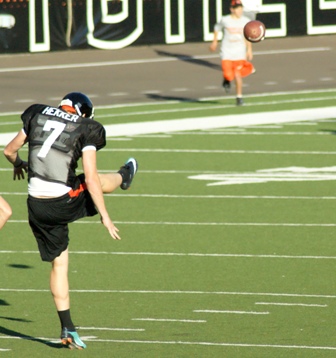 Special teams received a significant amount of time Wednesday as well, as punter Johnny Hekker (above) and place kicker Justin Kahut are key levers to managing the conditions Katz will encounter. 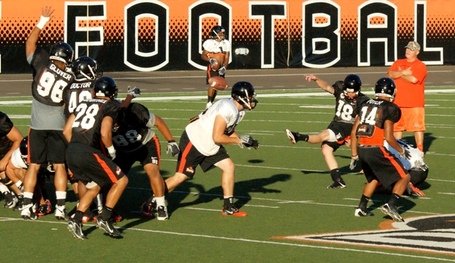 With a "scrum" on Thursday's agenda, Oregon St. is moving gradually towards more game like conditions, and Saturday's scrimmage with game officials will be the next step. It's still a significant contrast between how Riley runs a practice compared to many (most?) other coaches at any level.

That, of course, shouldn't come as news to those other programs, since anyone can walk in and watch whatever practice they want. And representatives from some programs do. It's interesting to listen to the concerns over secrets leaking out of places like the bay area and Seattle, among others, while Riley seems to almost politely be taunting his opponents, saying "Here's who we are, and what we do. Let's see if you can do anything about it." 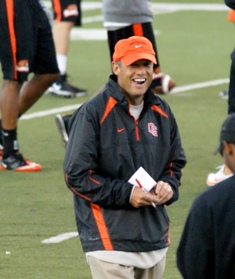 Mike Riley was happy with the offense's performance Wednesday night. 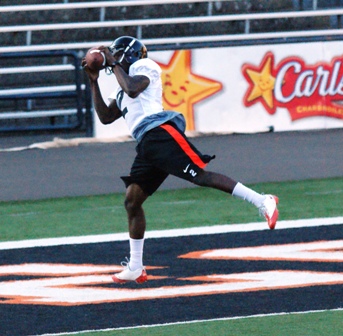 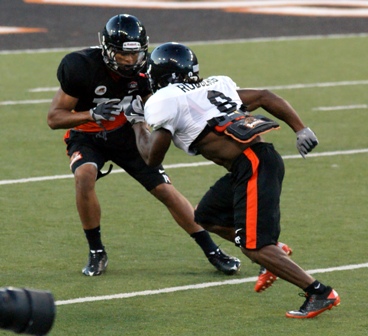 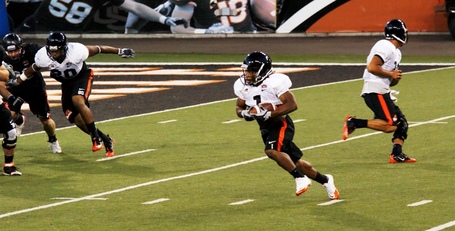