Week One Wrapped Up

Share All sharing options for: Week One Wrapped Up

Oregon St. has wrapped up week one of preparations for the fall football season, and after the first day of two a days, when the defense was allowed to fully unleash the blitz for the first time, coach Mike Riley was happy.

"It was a pretty good morning," Riley said. "I don't think anything really stood out. We did have our first big blitz period. It was a little sloppy offensively, but that was due to a lot of speed defensively. Besides that, it was a pretty good workout."

The measure of expectations for the Beavers in 2010, despite one of the toughest schedules in the nation, can be found not in the level of local media attention, although that's at a higher than historic level as well, but in the interest in Oregon St. on the national level.

And Jacquizz Rodgers, tabbed the best offensive player in the Pac-10 by Sports Illustrated, did a live interview with WJOX radio from Birmingham, Alabama. When the leading radio station in the largest market in a state deep in the heart of SEC country wants to devote air time to a kid from Texas who plays in the northwest, well, you know both the player and the program have hit the big time. 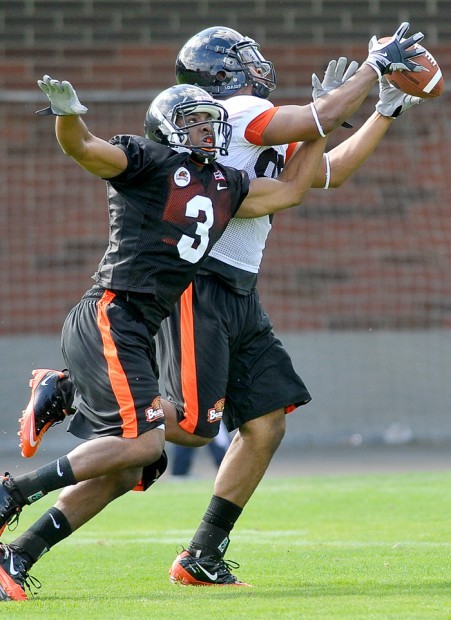 But while the Rodgers brothers, and the fleet of wide receivers Oregon St. has, garners lots of attention, the Beavers are working on another aspect of their offense, one OSU has capitalized on in recent seasons at the same time the position is disappearing from many systems, and at all levels. Tight end. The Corvallis Gazette Times' Cliff Kirkpatrick has a look at Joe Halahuni, Brady Camp, and John Reese, whom tight end coach Robin Ross has big plans for.

"They all have roles and that's what camp is all about, defining roles," Ross said. "Brady was the starter last year, Joe played a lot. John had a good spring in all areas. Their roles could change each week depending on the opponent and the game plan. We looked at that hard, at our tendencies, and we'll be more balanced with the tight ends so you can't lock in on what the personnel are doing because they are interchangeable in a lot of ways."

Halahuni, a junior, was a big play receiver for the Beavers last season, with 35 receptions, fourth high on the team, for 486 yards and three touchdowns. Camp, a senior, was primarily a sixth blocker, but proved he could score as well, when the Wild Flying Beaver was unveiled at Homecoming against UCLA last Halloween. Reese, a senior captured above at practice by the GT's Scobel Wiggins, is back after redshirting last season, after catching 10 passes for 109 yards in 2008.

Now that the evening session, which started at 6:30, after temperatures that hit the high 90's begin to abate, is over, there is some additional bad news on the injury front to report.

Tony Wilson may have claimed the middle linebacker starting job by default, as Reuben Robinson went down with an ankle sprain. The severity isn't known yet, but it will be a set back at best.

Jovan Stevenson, sophomore backup tailback, who popped his shoulder out in a fall in the ice tank midweek, may be headed for surgery.

The MRI on Stevenson's left shoulder showed enough damage that a decision must be made soon on whether or not to operate, which would sideline him for the season. Coach Riley said it would be Jovan's choice, in consultation with trainer Barney Graff and team doctors.

"You strengthen it, try to get back, and get through this year, or you take care of business now, get the surgery, take the redshirt year, and go from there,'' Riley said. "If there is any chance that he will have his shoulder pop out again, I would just as soon he have the surgery, redshirt, and still have three great years ahead of him.''

Junior Ryan McCants and sophomore Jordan Jenkins, one of the stars of the spring game, will likely share the job of backing up ‘Quizz, as Riley will probably use both, with specific, different roles for each. McCants brings much more power, while Jenkins, much more similar to Rodgers, is the better cutter, and also the better receiver out of the backfield.

TCU in Texas in three weeks from tonight!