Day 4 About Defense And Damaged Goods

Share All sharing options for: Day 4 About Defense And Damaged Goods

Day 4 of preseason practice at Oregon St. was a day for the defense. The Beaver's defense has a reputation and image of being strong, fast, and stingy, and if this is to be a year where the team meets or exceeds expectations, the defense will have to measure up.

Thursday, that's the kind of defense that was on display in team workouts and drills. Running backs found few holes and the secondary was tight with their coverage. Enough so to earn praise from head coach Mike Riley.

"They were flying around," Riley said. "It was a good deal. It was a lot of third-down stuff, so it was new today. It's fun to see that speed out there."

Gary Horowitz of the Salem Statesman-Journal also had a story on Tony Wilson, an in-state player from Salem's Sprague high who is one of those defensive players flying around, in search of the middle linebacker job in his case.

Thursday was also when most first learned of an injury to Jovan Stevenson, the backup to Jacquizz Rodgers at running back. Stevenson separated his left shoulder Wednesday night after practice, and will be out of contact for one or two weeks, according to Riley.

Stevenson had banged his shoulder in practice Wednesday, and went into the cold tub in the locker room. Where he got in his shoulder popped out of the socket. The shoulder went back in immediately, with the help of a trainer.

Stevenson didn't give specific about what happened, because he didn't know the cause. An MRI was scheduled to determine the extent of the damage.

"Believe it or not, it was when he got in the cold tub after practice and the thing seized up on him and the thing came out," Riley said.

Ryan McCants and Jordan Jenkins will move up to #2 and #3 on the RB depth chart for now.

Some other injuries are also beginning to accumulate at wide receiver, including receiver Geno Munoz, who left practice with a hamstring pull, and Darrell Catchings, who fell hard in practice, was shaken up, and then sat out the second half of the day.

These come in addition to Markus Wheaton's bruised shoulder, which has limited him to part-time work outs all week.

Aaron Nichols has absorbed a lot of reps in their absence, earning more praise from Riley, who says Nichols is in line for a starting job, especially given the injuries.

It wasn't all about the defense, or gloomy injury reports, though, as QB Ryan Katz continued to throw the ball well. Katz, though ranked ninth overall amongst Pac-10 quarterbacks by ESPN's Ted Miller (mostly due to being inexperienced in a conference that has seven teams with experienced starters returning, and nine teams currently have #1 QBs that have at least started a PAC_10 game), has been noted by Miller as the quarterback who may have the best arm in the conference that Miller feels has returned to being the Conference of Quarterbacks. 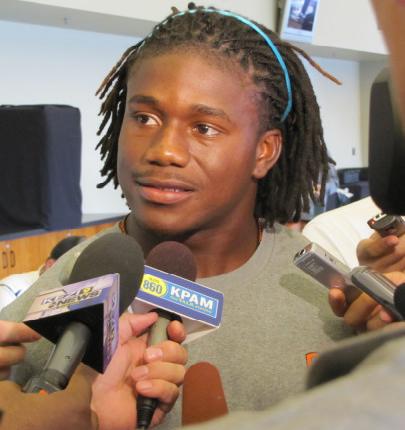 The Corvallis Gazette-Times' Cliff Kirkpatrick also has a report on James Rodgers (r., speaking to the press), the unquestioned leader of the Beavers, who by the way is on-track to graduate after winter term, in three years plus one term (see those summers spent in Corvallis brother Jacquizz attributes much of OSU's progress to). Kirkpatrick maintains the eldest Rodgers brother is the blueprint of the Oregon St. student athlete.