Where I Come From: Your All-Time Favorite Oregon State Team

Share All sharing options for: Where I Come From: Your All-Time Favorite Oregon State Team

This is the second post of a week-long series of posts sponsored by EA Sports NCAA Football 2011. If you missed yesterday's discussion on our own personal journeys to becoming OSU fans, check it out and add your personal story.

Considering what I wrote yesterday about how the 1998 Civil War was my first real taste of Oregon State football, I've now seen twelve OSU teams compete during my life. Now, I'd be lying if I said that I remembered details of each season-- this started when I was five, after all. More recent years are undoubtedly weighted heavier in my mind, simply because I remember them better.

For fans of some schools, this is easy. All they have to do is remember back to the last time their team won the National Championship.

We could do that if baseball was the topic of discussion, but it isn't.

For me, this decision comes down to the Oregon State teams of the past decade. When it came time for me to determine my favorite team, I turned to a yellow legal pad for some data collection. 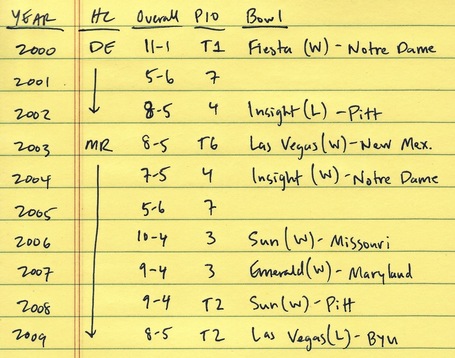 2008 and 2009 stick out for the way the team bounced back after early losses in the Pac-10 to nearly win the Championship, but I'm going to pick the 2006 squad as my all-time favorite OSU team.

The 2006 team, like we'd come to expect, got off to a rough start. Boise State dismantled the Beavers on the blue turf. Two weeks later, Nate Longshore picked the Beavers apart for 341 yards and 4 touchdowns as Cal dealt OSU a big blow to begin Pac-10 play.

As if things couldn't get any worse, the Beavers came out the next week and lost to Washington State, 13-6, in a game we've all tried hard to forget.

But this is when things came together, and the Beavers made their move.

The Beavers went up to Seattle and defeated Washington by ten points thanks to a second half comeback, then survived a late Wildcat charge to defeat Arizona in Tucson the next week.

The entire dynamic of the season changed on October 28, when John David Booty and USC came into Reser Stadium. Playing without an injured Yvenson Bernard, the Beavers turned to Matt Moore and backup tailback Clinton Polk, who proceeded to have the game of his life. Clinton rushed 22 times for 100 yards against the vaunted USC defense. The Beavers led 33-10 in the third quarter, but the Trojans came storming back. USC would score a touchdown with :07 remaining to get themselves within two, but John David Booty's pass was batted down by Jeff Van Orsow, and euphoria ensued in Corvallis.

The Beavers would falter a few weeks later when they traveled to UCLA, but they had built up a 5-3 Pac-10 record heading into the Civil War.

Alexis Serna's field goal with 1:12 left in the fourth quarter put the Beavers up by two, but Oregon got into field goal range and had a chance for the win. In one of the great moments of the season, Matt Evensen's 44-yard field goal try was blocked with less than a minute remaining, OSU recovered, and the Beavers won the game.

Following the Civil War, the Beavers traveled to Hawaii and won a game that many people thought OSU would lose, which set them up for a Sun Bowl matchup with Missouri.

It then came down to the Sun Bowl, a game that went back and forth until the final whistle. Matt Moore threw for 356 yards and 4 touchdowns, Chase Daniel threw for 330 and 2 touchdowns, and Missouri running back Tony Temple averaged almost 10 yards per carry as he ran for 194 yards against the Beaver defense.

The Beavers trailed by 14 points with 12 minutes remaining, but got the defensive stops they needed, along with two touchdowns to inch closer. The most memorable was the pass from Matt Moore to Joe Newton over the middle of the field with under a minute left, which set up the following situation:

Twenty-three seconds left, Sun Bowl on the line. Trailing by one. Do you kick the field goal, or go for two?

Yvenson Bernard begged Mike Riley for the ball. The Beavers ran "Zing, I-right, Ice Blast," Bernard churned the legs, and the Beavers won the game to finish 10-4 on the year.

Why is this my favorite Beaver team? Because after the horrid start to the season, they remained resilient, and constantly delivered when it mattered most. When USC came charging back in the second half, they didn't fold. When OSU needed a field goal from Alexis Serna to put them up in the Civil War, he delivered. When OSU got thrown into a hostile environment at Aloha Stadium, they held on for a 3-point win. And then, for the Beavers to go "all-in" in the Sun Bowl and come through again? It was an amazing finish to the season.

I've retained a lot of memories from the 2006 season-- and the Beavers ended that season on as high of a note as they possible could.

That's my all-time favorite Oregon State football team. Which is yours?