Building the Dam's annual tournament to determine the best game of the past season has concluded, and Oregon State's football victory over California in Memorial Stadium in October 7, 2009 won the top prize.

Thanks to Connor for facilitating the seeding and voting during the tournament. You can see the complete bracket after the jump.

Let's relive the game with an excerpt from my game recap:

NOVEMBER 8, 2009 -- It was billed to be a marquee matchup between two of the premier running backs in the Pac-10 conference.

It ended up being a quarterback competition, with Sean Canfield in one corner for the Beavers, and Kevin Riley in another for the Bears.

It was obvious that Cal's defensive game-plan was to stop Jacquizz Rodgers, and Oregon State's intention was to stop Jahvid Best. Plain and simple. Both teams did a fairly good job at accomplishing this task. The Beavers held Jahvid Best to just 29 yards on the 9 carries he received before leaving the game due to injury. He left the game with six minutes remaining in the second quarter, so he could have done more damage, but OSU's defense was holding him to just over three yards per carry. [...]

Overall, I felt both the offense and defense played great. The defense stepped up to stop Jahvid Best, Shane Voreen, and the whole Cal ground attack. Kevin Riley picked up 200 yards in the air, but wasn't able to hurt the Beavers much. The Bears obviously are having some offensive line troubles, and Riley didn't have much time to throw. He was sacked twice, once by Gabe Miller and once by Keaton Kristick.

Bracket and past winners after the break. Thanks again, Connor, for all your hard work on this! And thanks to all of you for voting. 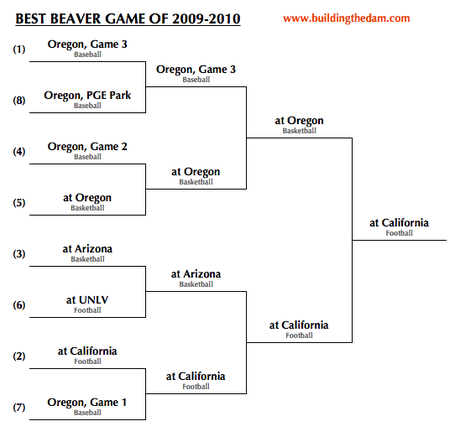