Les Schwab Bowl A Look At Some Future Pac-10 Players

Share All sharing options for: Les Schwab Bowl A Look At Some Future Pac-10 Players 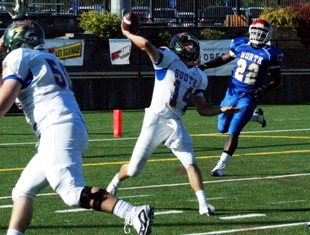 Covering the Les Schwab Bowl last night was an opportunity to take a look at several of Oregon's best graduating seniors who are heading to Oregon St., and a couple of other Pac-10 programs.

The game annually pits seniors from Oregon's 6A and 5A classifications, the two largest school sizes, in a North vs. South format.

The last couple of years, future Beavers gave a glimpse of things to come. Mitch Singler's catches for the South were among last year's highlights, and former Lake Oswego QB Jack Lomax became the second consecutive future Beaver to take the game's MVP, following on Jordan Bishop's 2008 MVP award, built on the same type of athletic catches he made for Oregon St. last fall.

This year was different, as the show was stolen by a couple of state 6A champion Sheldon graduates that are headed to big things at small schools. Montana bound QB Jordan Bishop threw for four touchdowns, three of them to John Campbell, who is headed to Harvard, as the South claimed a dominating 35-13 win.

But while future Beavers weren't spectacular this time, there was still a lot to like. Another member of that Sheldon team that has won two of the last three big-school championships is 6'4" 290 lb. lineman Derek Nielsen (50, shown clearing a passing lane for Johnson), who continued to do what he has done for years, namely protect Johnson while he lit up defenses. (UCLA bound Owamagbe Odighizuwa (22) is also seen, closing from the back side.)

Operating out of the spread offense, Nielsen is already well versed in pass protection, something sometimes lacking in high school prospects, depending on the tendencies of their school's offense.

North Eugene's Michael Bibbee, who is ticketed for the Oregon St. linebacking corp, and Lake Oswego's Will Storey also had solid if not spectacular evenings.

Bibbee has a nose for football, and turned up time and again in the middle of the action. All star games aren't necessarily the best showcases for talent, as mixing a variety of players and coaches in a short amount of time doesn't allow for any fine tuning. But one thing they do show is a players' ability, and willingness, to adapt. Bibbee appears to be an excellent fit for Oregon St's. "lunchpail U" system, where doing whatever is called for all day long works.

The same appears to be the case with Storey, the latest in a long line of players to come from ex-Beaver and Laker Coach Steve Coury's program. 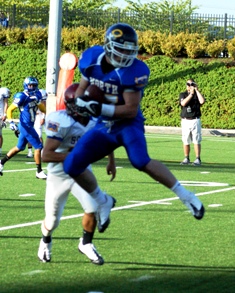 The North lost Central Catholic QB Jordan Perry to a twisted knee just before halftime, and several passes aimed for Storey were off target through the evening. But a nice leaping catch over the middle (r.) did demonstrate what might be possible. Storey was also effective as a blocker, and as a decoy, when that was what the play called for.

Though there are differences in each of their games, I was struck by just how similar Storey is to the Darkins brothers, Andy and Will, also Lake O. products that went on to OSU, as far as their field presence goes. Storey is first and foremost a "football player."

Two other Pac-10 recruits that eluded Oregon St. were on display, and they responded with team "best lineman" awards for the North and South.

UCLA bound Owamagbe Odighizuwa from David Douglas High east of Portland was the player many in attendance was wanting to see, and the one that got the most rave reviews from other players after the week's practices. The 6'3" 240 lb. DE is a prototype edge rusher, but it will be interesting to see if the Bruins keep him at end, or try him as an outside LB, once they get a closer look.

"Owa" is an athletic specimen to be sure, but could use some more size in order to defend the run. And there is no such thing as too much upper body strength when facing Pac-10 grade tackles, most of which out-weigh "Owa" by 50 or more pounds. When facing teams with RBs like Jacquizz Rogers, LaMichael James, and Chris Polk, the edge guy has a lot to deal with.

The Washington Huskies appear to have a find in James Atoe from The Dalles-Wahtonka. The 6'7" 325 lb. Atoe, who got away from both the Beavers and the Ducks, is a mountain of a young man, capable of playing on either side of the line. And unlike many players of his size, he has experience, and the mobility, to play at LB, as well. 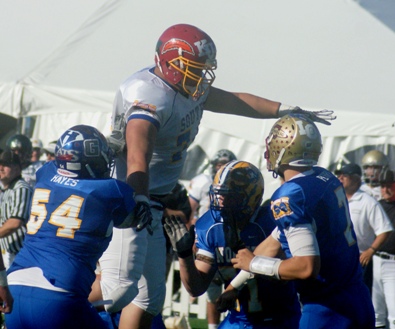 The Huskies will narrow his focus to a single position, but Atoe (74, above) looks to have the tools to continue to be a force to be dealt with.