Share All sharing options for: Oregon St. and Pac-10 Odds And Ends 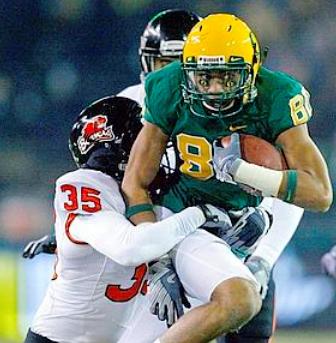 After a wild run of expansion activity, the usual summer storyline slowdown has finally  shown up, but there have been a few developments of note the last couple of days.

Easily the biggest for Oregon St. fans is the good news that outside linebacker Keith Pankey (35, l., making a Civil War tackle) ran for the first time yesterday, after tearing an Achilles tendon back in February. It validated Pankey's vow to be back up to speed by the time summer camp comes around, and be ready to go come Labor Day weekend in Dallas.

Pankey, who platooned as a junior with Dwight Roberson at the "will" outside linebacker spot the last two seasons, is hoped to be able to bookend Roberson this season as the outside linebackers for the Beavers. Both earned all-conference mention despite neither being an every down player last season.

Before Pankey's injury, Oregon St. looked set at linebacker, with only senior Keaton Kristick departing. But Pankey got hurt, and middle linebacker David Pa'aluhi quit, raising a lot of concern going into the spring game. Tony Wilson should be fine in the middle, as his knee held up through the spring, and remember, Wilson was expected to anchor the middle last year, before his knee injury opened the door for Pa'aluhi.

But Pankey's return has to be the best news possible for the linebacker corps.

Keeping track of the Pac-10 at the College World Series, UCLA is rolling along. Last night, the Bruins backed up their opening day 11-3 win over Florida with a 6-3 win over TCU, overcoming a three run triple. UCLA now sets back until Friday, and is one win away from the final best of three series, with two opportunities to get that win, if need be.

Florida, which battered both Oregon St., and Florida Atlantic, who eliminated the Beavers, back in the regional, went two and done, losing to Florida St. 8-5.

Pac-10 Conference Champion Arizona St. isn't doing as well though, and will have to win this afternoon against upset minded South Carolina, who already bounced Coastal Carolina back in the super regionals, to stay alive.

A 6-3 upset loss to Clemson Sunday means the Sun Devils must win today to in order to earn another must win game Thursday in order to advance to the semis on their side of the bracket. Thursday's game will be against the loser of this evening's Oklahoma-Clemson game, and the winner of that game will await on Friday.