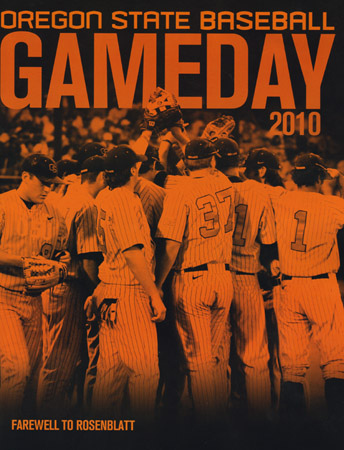 Oregon State baseball 2010 (31-22 overall, 12-15 Pac-10). Doing a wrap of this season is an interesting task. Everyone, the team and coaches included I think, have tried to figure out this team, what happened, and what could possibly still happen.

People have attempted to gain some sort of insight into this team, myself included, and have thrown out analysis such as this is a rebuilding year, or this an underachieving team with talent, or this is the end of the OSU era in the State of Oregon, or the team just had a mid-season team slump, and so on. My own frustration has come from trying to wrap my head around what for most of us this season has been a mysterious, and a little distant, team. But for me I still don’t have a good idea of what this team is about, and indeed not sure what my expectations are right now for this team.

I remember in an early radio broadcast Jay Reese saying something to the effect that "Beavers fans you are going to like this team." But as we went deeper into conference play we had an increasingly difficult time totally warming up to a team that kept leaving runners on in key scoring situations, had more base running mistakes than I ever remember in OSU baseball, had a solid pitching staff look terrible and uninspired, and were just playing some of the worse Beaver baseball of recent memory. But the team has dug down and got themselves, against the seeming odds, into the postseason. What happens now?

With the Beavs headed into the postseason and missing some key players such as Stefen Romero (Romero missed the final Arizona series and is out for the postseason with a fracture in his arm) it is even harder right now to gauge this team’s possibilities. But after a strong finish you have to wonder if this team does indeed yes have something in them to prove.

Let’s get at this in a bit more detail after the break here.

So back to my preseason "Things I think we need to look for in regards to a successful 2010 season" categories, which I see as breaking down into the pre-conference season, the 'dark times' of conference play, and the resurgence era of the conference season: 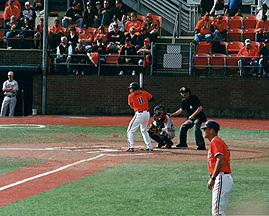 1.  Offensive improvement and consistency:  In the pre-conference season the batting really seemed to show a ton of potential and with outscoring teams like Tennessee 17 to 1, UC Riverside 10 to 3, Maine 18 to 3, and Long Beach State 16 to 4 the future looked bright.  The USC series looked okay, but then the bats started to go quiet at important times as the season progressed.  I don't want to dwell on the offensive side of things, and yes the team batting average of .266 was the worse of the Pac-10, but I really think overall it was not just the offense at fault this season.  I think it was problematic for sure, but Casey coached teams don't win games relying on offense,  When the other areas of the game are struggling as bad as they did at times this year the offense can't be blamed as the overarching problem.

Here is an illustration of what I am thinking and take the first two ASU games.  These games saw the Beavs have eight hits each time out, but in the first game with the pitching and fielding issues the Beavs lost 10 to 4, whereas in the second game the Beavs only lost 6 to 5.  Yes, I know that when the bats came alive in game three they won; and I know in that 6 to 5 loss there were chances to win, but that's a bit of my point in that at least there were chances to win that second game, whereas the first game the defensive/pitching side of things left no chance to win.

That said the offense needs to improve and step it up in the postseason, and very much the team needs to clean up the base running mistakes that have been costly at times.  Additionally, I'm not sure what happened to the famous OSU small ball play, for it seemed to be almost totally absent this year with either some horrible bunting technique or just not bunting at all, as well as not many hit and runs that I can remember. 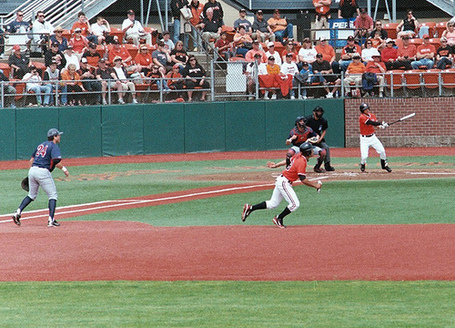 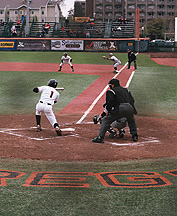 This season Romero (.326 with 13 HRs) and Santos (.337 with 10 HRs) were pretty much lights out (Santos had a bit of a shaky period but recovered nicely), and at times I think we saw some very promising things with the young players such as Boyd, Hayes, Tyler Smith, and Susac, so it is too bad some of the returning players didn't quite step it up like I thought they would.

If one compares the stats versus last year the Beavs numbers are not that far off if not higher in certain areas, such as in 2009 the team only had 22 HRs and this year they almost doubled that total.  Yes last year did have issues too, but what I found striking was the opponents numbers were higher on average and in general the Beavs stats seem to indicate a ton of untapped potential.

2.  Leadership needs to happen:  Wow, well this has been my beat the drum (or dead horse) issue of the season hasn't it been?  I thought there was some leadership emerging with people like Bell, Peavey, Boyd, and Santos at different times this year, but things just went downhill with this team and they never really seemed to bond until the 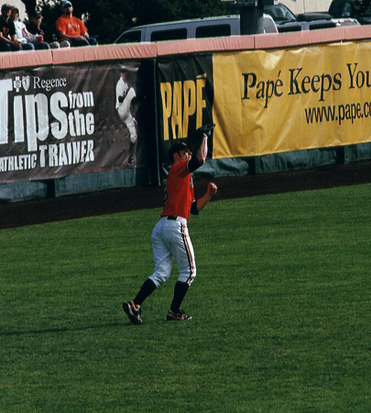 end.  I think Romero and Santos both stepped up in big ways, especially Santos when Romero went out with the injury.  I also think the team has bonded more lately and there doesn't seem to be that tension you saw in the slump.  At the same time I still don't see a true team identity yet.  Postseason will very much sift out the teams with the identities from those without, so we'll see where the Beavs end up on this scale (here's hoping to a repeat of 2007!).

3.  Defense needs to continue the strong OSU tradition:  Again a tale of three seasons here.  We had solid play in the non-conference games, then some of the worse OSU defensive performances I can remember under a Casey led team (if in doubt just go back and replay that first game against the UO in Eugene), and then in the latter part of the season the team went back to their old ways of solid to spectacular defensive play (a highlight for me was Rob Folsom's awesome grab of a hard hit ball into center field in the third UA game when more Wildcats runs would have totally closed the deal).

In general I thought Jennette, Smith, Bell, Norris, Berberet, and Romero were all solid in the infield.  The outfield shored up better once Santos went to left field, but in general some good play out there by Norris, Folsom, and Miller all season. 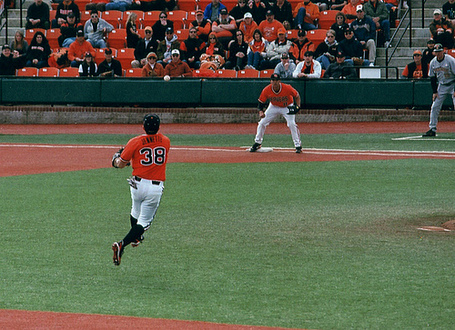 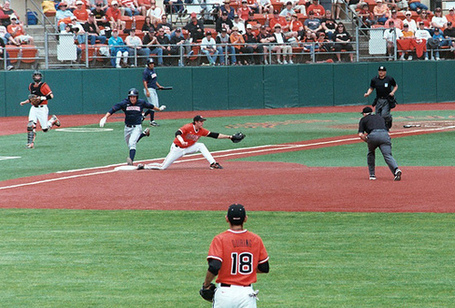 Overall the stats indicate for me much of this defensive back and forth in that the Beavs had ten more errors this year but the fielding % was only down slightly from .976 last year, but this dropped the Beavs from 11th in the country last year to 37th. 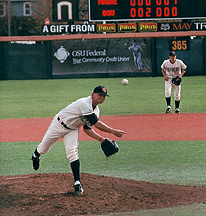 4.  Pitching, pitching, and pitching:  For me this is where a lot of the issues came to the fore this year.  I know many people really keyed in on the batting this year, but I just saw a team's pitching rotation that lacked depth and consistency.  As such put the Beavs in some big holes this year during the 'dark times' of the conference season.  Indeed the conference ERA for the Beavs was at 4.82 versus opponent ERA of 3.59. 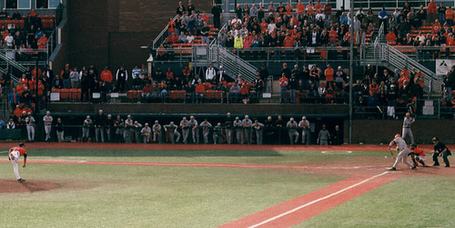 I think the numbers show the pitching was down this year, take for instance ERA and last year the Beavs were 7th in the nation at 3.69 and this year fell to 25th at 3.95. 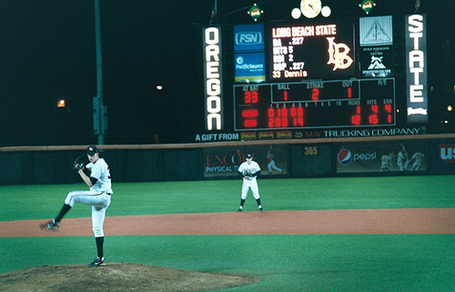 5.  Solid non-conference play, sustained high level of conference play, and MOST of all a strong finish:  Well, if you followed the team this year there really isn't much to say about this beyond what has been said above.  This basically broke down into a strong Yes (non-conference), strong No (sustained conference), and a very good Yes (strong finish).  I think all that can be added here is now the Beavs have a new season to work with, and we'll see how the 'yes' answers translate to the postseason play. 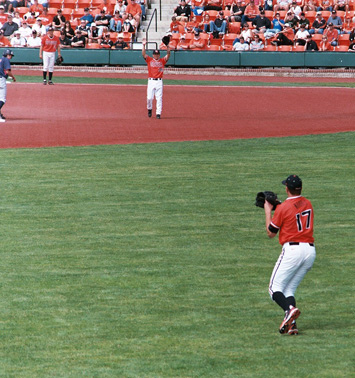 BtD Player Watch:  In my preseason post I also had a series of players to watch this year and to quickly sum this up: some like Rhoderick and Gavilgio didn’t quite live up to their potential as they fought off injuries; some like Romero and Santos lived up to their experienced qualities and led the team at times; and some like Danny Hayes, Matt Boyd, and Andrew Susac showed glimpses of future talent but also slumped into lapses of young inexperienced play. I think of my original list that three players really stand out as ones that will need to step it up, or keep stepping up their late season success, in order for the Beavs to be successful in the postseason: Jared Norris, Carter Bell, and Tyler Waldron. Santos and Peavey are no brainers here of course, but I just feel these additional three have the potential to step it up and co-lead this team.

Final Regular Season Thoughts and the Future:  This season I went from some strong excitement for this team's potential, to a fan's deer-in-the-headlights frustration and disappointment as I watched some of the worse play I've seen out of Beaver baseball (Casey era), to a renewed sense of pride and excitement as the team dug deep to get themselves into the postseason.  I believe if the Beavs play like they have since the second ASU game (so the last two ASU games, the last UO game, and the UA series) that the Beavs can make some noise in the postseason.  But I have to be honest and say that I'm still very unsure of who this team is, but I'm willing to follow along to find out. 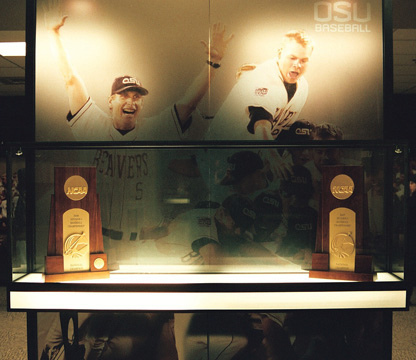