Who Gets In? Oregon State Makes Strong Case, But Fates Still Uncertain

Share All sharing options for: Who Gets In? Oregon State Makes Strong Case, But Fates Still Uncertain

Like we've been saying here on Building the Dam all week, Oregon State felt at the onset of this four game week that winning two of four games would be enough for a postseason berth. Once the Beavers got by Oregon on Wednesday at PGE Park, the overwhelming feeling was that winning two games against Arizona would secure a spot in the postseason for Oregon State.

The Beavers clinched the series win with victories on Friday and Saturday night, but couldn't sweep the series with a win on Sunday in the season finale. Today's loss again has cast a fair amount of doubt on the situation for Beaver fans, but it still seems to me that the Beaver Nation can be fairly confident heading into tomorrow.

It seems most likely that the Pac-10 will get seven teams into the tournament. Eight is a possibility, but seven seems most accurate.

Today's results: Arizona over Oregon State, Oregon over Cal, UCLA over Washington State, and USC over Washington. Arizona State and Stanford idle after finishing their series on Saturday. 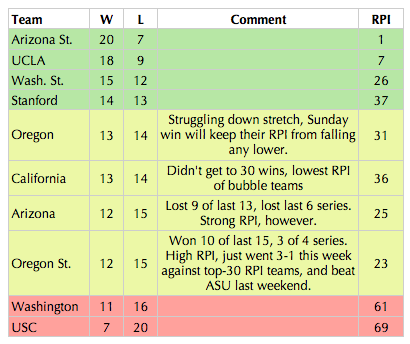 I'll update this post as the night goes in if my feelings change, but these are my gut instincts at the conclusion of today's games.

Is my analysis fair? Or am I off base somewhere? It seems like everyone has a different opinion on this, so I'm very interested in hearing yours.

ALSO: Make sure you join myself and other BtD regulars tomorrow morning around 9:00 a.m. for the Selection Show, which will air at 9:30 on ESPN.