The Ducks may have the better record and already be a lock for a NCAA Tournament berth, but the Beavers have cemented themselves as the dominant team in head-to-head match-ups for the second year in a row.

The Ducks got the best of the Beavers back on a dreary day in Eugene when the Beavers were in the midst of their infamous 12-game slump. However, the Beavers have bounced back by sweeping the three games that count in the Pac-10 standings, as well as Wednesday's game at PGE Park.

The four games that the Beavers have won have all been decided by one run, something that Oregon State head coach Pat Casey says is a testament to the will of his players to win.

"A lot of people put us on the back burner when we went through that stretch a few weeks ago," head coach Pat Casey told John Canzano on the Bald Faced Truth. "People started saying 'It's okay, you lost a couple arms, you lost your starting second baseman, you're fine, you're rebuilding'. And like I told them, we ain't rebuilding nothing here. We're going to rebuild character right here in this locker room, and that's what it's going to take to dig us out of this hole. We're in the best conference in the country, and we may not win it but we aren't going to back away from anybody."

The Beavers were cautious with their pitchers on Wednesday, attempting to balance the fact that Wednesday's game was important with the need to prepare for the weekend series with Arizona.

The Beavers won all three games of the conference series in walk-off fashion, with two of the games going into extra innings. The wins came at a time when the Beavers had lost eleven of twelve games, and OSU's second Pac-10 sweep in the last four years came at the perfect time.

Since then, the Beavers won their series with Washington and stole the Sunday game at Arizona State-- a series, however, that Pat Casey will tell you the Beavers should have won.

The Wednesday win over Oregon puts the Beavers at 29-21 on the year, and 10-14 in the Pac-10. The Beavers feel that a 12-15 record in conference would be good enough to get them into the tournament, but 13-14 would obviously give the team an even higher level of confidence heading into Monday's selection. 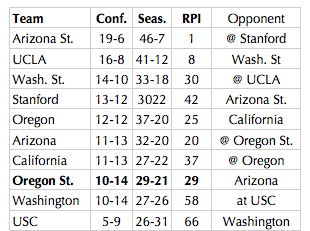 On the other hand, Oregon is sitting in better position at 12-12 in conference and 37-20 on the year.

"I don't think Oregon has to have a great weekend to get into the tournament," Casey said. They've certainly played very, very well. They've played eight more games than us. We've had four games rained out and they used the exemption to go to Hawaii, so that makes it difficult and it was a good move by them."

While most believe that the Ducks can afford to play poorly this weekend against California and qualify for the NCAA tournament regardless, the Beavers need to win their series against Arizona to remain confident about playing into the postseason.

The Beavers have a high RPI thanks to a strong non-conference showing and the strength of their schedule. The Beavers currently sit in 29th in the NCAA's Ratings Power Index, just four spots behind the Ducks despite the discrepancy in the records of both teams.

"If we win two of three, I would think there's no question we're a lock to get in. If we win one-- with our RPI and our conference RPI, I would think we'd get in. But the committee makes those decisions."