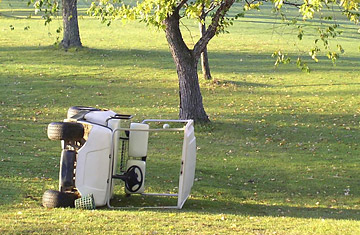 The official judgement on the OSU golf cart scandal has been passed down. All parties are being held accountable financially and have been put on probation with community service.

Lyle Moevao will serve 40 hours of community service, Keaton Kristick 25, and Brennan Olander 65. Moevao will also pay $750 restitution for damages to the cart, and Kristick and Olander will pay their share back to Moevao.

All three originally faced and plead innocent to felony charges, then plead guilty to reduced charges, though Moevao maintains that he found the golf cart near the apartment complex, and was not the person who took it.

In part because of prior convictions, in 2009 involving possession of a stolen bike, and in 2006 for criminal mischief, Olander also received 12 months probation.

Read more about it here from The Oregonian,
The Gazette-Times or keep track of the Beavs recent surge in EDSBS's Fulmer Cup!

"You each know you are in the public eye,'' Benton County Circuit Judge Locke A. Williams told the three. "You are somewhat held to a higher standard, at least in the view of the public. People look up to you. You have a responsibility to live up to that higher expectation.''

Williams said the whole episode could have been seen as "a simple college prank'' had the cart been returned, and probably, no one would have found out, because the athletic department was probably unlikely to press the issue.

“I didn’t mean to harm anyone or violate any rules or regulations,’’ Moevao said in court. “It was a night we were trying to have some fun, and obviously, it was the wrong kind of fun. I made a dumb mistake.’’

What do you think? Does the punishment fit the crime? What do you expect Riley and Co. to do?