Beavers Have A Backup For Quizz!

Share All sharing options for: Beavers Have A Backup For Quizz!

He isn't as fast, and he weighs even less, but he can run over a whole team to get to the endzone! 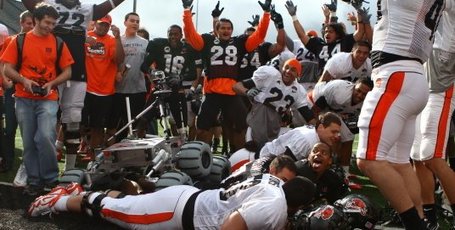 Practice Wednesday ended with a dropped touchdown pass that was off-target low, a reminder from Coach Mike Riley that "We have got to get better!" that could be heard a tier up at Reser Stadium, and then a new record for bodies run over.

The Oregon St. Robotics club brought their Mars Rover to Reser to audition for the role of backup for Jaquizz Rogers. And the six-wheeled all-terrain vehicle proceeded to rumble the length of the field (a longer scoring run than Quizz has managed so far). Every player in uniform, plus assorted coaches (including Riley), staff, and miscellaneous people in the way were climbed over by the 95 pound tele-rover.

"When it drives over you it feels like five pounds," Robotics Club president Ryan Albright said.

The fun end of a month of work was so much fun, players already run over were running ahead, only to get run over a second, or even a third time, making the record for people run-over about 200, well up from rover's previous record of 32.

"It's one of those great moments that college is about," Riley felt.

The Spring Game at noon Saturday will follow fan fest, with an autograph session by the players on Parker Plaza, starting at 10. The Oregon State Band will arrive at 11, and Beaver Nation can get their off-season fix of "Orange" to carry them over until the Labor Day Trip to "Big D", to play TCU.